Yves here. Another confirmation that central banks are flailing about.

This month has seen the antipodean central banks both cut rates, with almost no flow through to mortgages to relieve consumer debt and an appreciation in their respective currencies, in perfect opposition to their stated goals.

This is not a new trend – far from it. What’s supposed to happen when the local economy slows is you pull the lever, Kronk, lower interest rates stimulate consumer spending, reducing savings rate as a deluge of money floods the economy, inflation goes up, wages go up, more spending and whoosh, in come the accolades from the captured business media elites.

Now levers are pulled left right and centre and nothing seems to happen, further hindered by a lack of communication from both monetary and fiscal authorities into the truth of the matter at hand – that a lack of confidence in the direction of the economy is what is holding back consumer spending, not lower rates.

Furthermore, communicating and smoothing the confidence game that is the market is now becoming more of a parasite/host relationship, instead of a divorced, clinical approach in the past.

At Forexlive they put it a little less eloquently:

Back in the day a central bank would move rates when they saw fit and certainly didn’t massively advertise the fact. Traders and the population were left to infer expected action from what the economy was doing. If inflation was high then you’d get ready for hikes. If the economy was wobbling, you’d get prepared for cuts. Forward guidance was minimum but everyone knew where they stood on it. It made for some hairy monetary policy decisions but that’s what traders thrived on.

Nowadays no one should be expecting a big downside move on a cut, nor big upside move on a hike, unless it comes out of the blue. Forward guidance brings the move a rate cut would bring forward so when we get the actual rate cut, we’re expecting it. All that’s happened is the move has shifted forward in time.

As far as the currency is concerned, this rate cut has been a waste of time and now they may be forced into intervention to get it lower. We know how that’s worked out for them previously.

Forward guidance can work but it depends on who’s doing it. Look at Draghi back in 2014 when the euro was at 1.40. Remember Trichet and his vigilance/strong vigilance clues? The difference is that the ECB and the euro is huge, and with all due respect, the RBNZ and NZD isn’t. Draghi can utter a word and the market can move a thousand pips. Wheeler can utter the same word and the market can go “meh”.

You can’t stop change but I wish central banks would kick forward guidance out the window. They need to get shot of fan charts, dot plots,  projections and just concentrate on what they should be doing, not on what the market may think or do if they act. If they did that then monetary policy would have a greater, and most probably a more positive, effect on their economies.

But would it really? Pushing on a string is what is really happening as this post-GFC global economy continues to mature, where rate cuts seem to be having the opposite effect.

According to a recent Wall Street Journal article based on data from the Organisation for Economic Co-operation and Development, Moody’s and corporate regulatory filings consumers in countries with negative rates are actually saving more now than in 1995.

And a measure of corporate cash coffers compared to revenues for Europe and neighbouring countries has been climbing over the past 5 years. At the end of 2015 the ratio was at a level not seen since 2010, representing almost 1 trillion Euros in corporate bank accounts. 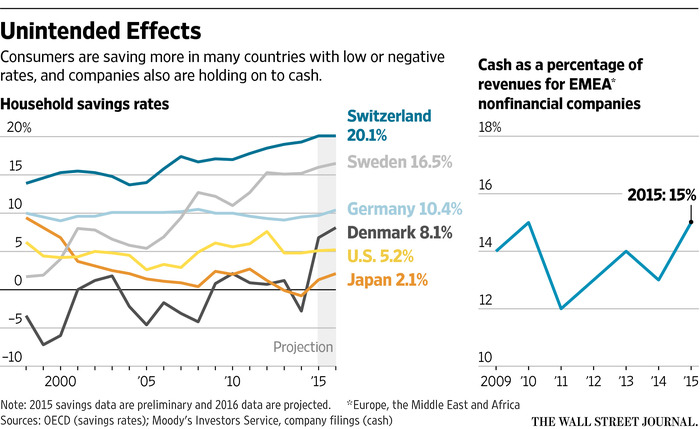 Interestingly, the Australian household savings rate is in decline:

But retail sales growth is tapering:

While corporate bank accounts burgeon, with surplus funds only used to buyback shares, not for investment, with more than 25% of assets being cash at hand – the second biggest in the world. So cutting interest rates to stimulate business investment wouldn’t work because why borrow money at record lows when you’re sitting on a mountain of it like Scrooge McDuck?

And indeed the latest figures bear this out, with business lending at record lows: 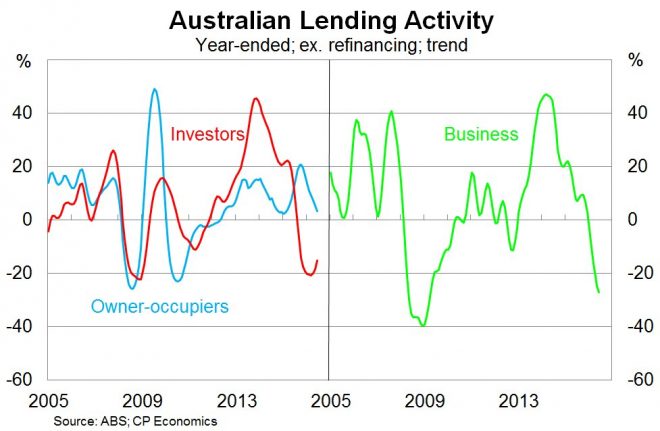 Workers are faced with the same problem, yet it is compounded by the slow state of the current and projected economic environments. When central banks, government officials and the financial community have low expectations for economic prosperity, the confidence of businesses and consumers is also sure to fall. Confidence in the economy is a necessary condition for spending, and today’s lack of confidence means more saving.

Unfortunately for central bankers hoping to boost spending by offering cheap loans, they may have only boosted the incentive to squirrel away even more money. Counterintuitively, higher rather than lower interest rates may be the key to stimulating these economies. But that has a whole other set of issues to deal with.

First of which, particularly here in Australian and New Zealand is an enormous mountain of debt that needs to be serviced. Raising interest rates may stimulate one third of the economy that owns its house outright and has no debt, but for the rest, only runaway inflation can solve their debt binge problem. And no central bank governor wants that millstone around their neck, as they cling mightily to the 2-3% theoretical zone.

One hopes that a new Captain at the helm of the RBA when Glenn Stevens steps down can be a little more willing to admit defeat in the rates war and get more proactive and honest with both the FX market and the households of Australia.