House-Flippers Turn to the Crowd for Quick Cash. What Could Go Wrong? Bloomberg

Facebook Overestimated Key Video Metric for Two Years Wall Street Journal. I can’t imagine buying anything because I saw an ad for it on Facebook; the reverse, if anything. Is it just me?

Neither Uber nor 2016 believe sharing is the future Digitopoly

For the Debaters: What Shall We Do About the Tech Careening Our Way? NYT. Self-driving trucks (on highways only).

The US road map to balkanize Syria Pepe Escobar, RT

“This Is a Rebellion”: A Protester Speaks From the Front Lines in Charlotte Truthout. “No, sire…”

Judge rules NYPD can act as prosecutor in Black Lives Matter protest cases NY Daily News. “‘District attorneys are legally permitted to delegate the prosecution of petty crimes or offenses so long as the district attorney is also informed of all criminal prosecutions in the county,’ Mitchell wrote in his Jeffryes decision.” Seems legit.

Kool-Aid and Cyanide Jacobin. That time Bill Clinton doubled down on mass incarceration.

Feds: We can read all your email, and you’ll never know The Conversation (J-LS).

America Is Not the Greatest Country on Earth. It’s No. 28 Bloomberg

How A Decision In May Changed The General Election Buzzfeed. Important on the Clinton campaign’s change of strategy in May:

Clinton’s strategy is unrecognizable from the first year of her campaign. She doesn’t tie Trump to the rest of the Republican Party. She doesn’t talk about Republican extremism or Republican rhetoric or Republican ideology. She has made the race almost exclusively about Donald Trump, his temperament, his qualifications, his character, and his fitness to serve, leaving the rest of the Democratic Party to adjust to a general election that has little to do with traditional partisan policy or politics.

Still, the message has disadvantages for Democrats.

Senate Republicans have been able to distance themselves from Trump to their benefit: In New Hampshire, 78% of voters see Ayotte, a first-term senator who rarely mentions her party’s nominee on the campaign trail, as a “different kind of Republican” than Trump, according to a CBS News-YouGov poll of battleground states last month.

Two other vulnerable GOP incumbent candidates, Sens. Pat Toomey and Richard Burr, have seen a similar dynamic among voters in their respective home states, Pennsylvania and North Carolina. In Ohio, 20% of likely Clinton voters said in another recent poll that they will also vote for incumbent Republican Sen. Rob Portman over the Democrat.

As it turned out, Republican establishment endorsements (and donations) following Clinton’s May pivot weren’t followed by Republican defection at the base; Republicans “came home.” Without them, Clinton’s base is uncomfortably narrow. It’s unclear how she can appeal to the youthful democraphic she told to “do their own research” and smeared as #BernieBros; certainly not by making appeals to the Sanders-like policies she derided as “free stuff.” It’s also unclear how she can get more turnout in the older black community and the credentialled 10% than she already has. And bonus points for throwing downballot Democrats under the bus! No wonder party barons like Warren and Sanders are starting to throw their weight around before November 8; they win as strong opposition figures or strong policy-makers. And no wonder Democrat loyalist operatives like Drum and Krugman are wheeling the Blame Cannons into position. Events, dear boy, events; and a few swing counties in a few swing states; but we’ve seen Clinton snatch defeat from the jaws of victory before. Will Clinton’s May pivot be the Von Kluck’s Turn of campaign 2016?

How to Know an Election is Over Scott Adams. Comment on Clinton video here, which you should watch for the visual, with the sound turned down.

Why Hillary Clinton Is In Serious Danger Of Losing To Trump Thom Hartman (RR). “I’m not Trump” commits the classic error: “You can’t beat something with nothing.”

When It Comes to Baskets, We’re All Deplorable NYT

Enrollment is tanking at the University of Phoenix, DeVry and other for-profit colleges Los Angeles Times

The Whistleblowers of Oz Pando

How the FDA Manipulates the Media Scientific American

Against happiness The Economist. True fact: Zappos has a chief happiness officer. 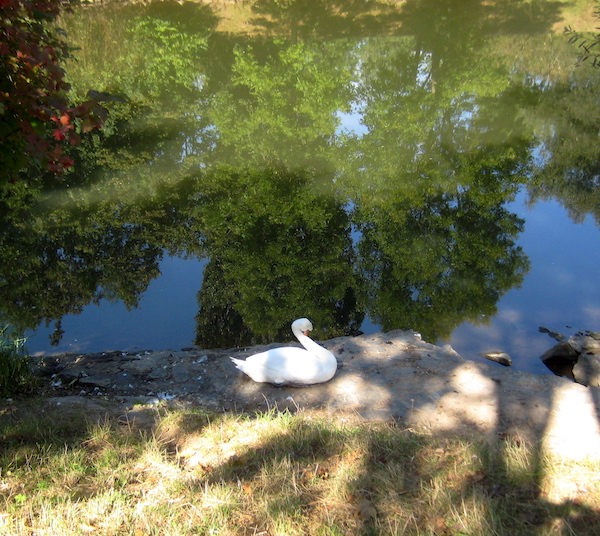 Mrs. Mop writes: “I met this beautiful fellow on my morning bike ride. He/she was not even slightly impressed by my curiosity, just kept going with his morning toilet, every now and then stretching her long neck to gaze at the mirroring water.”