Yves here. This post confirms Lambert’s conclusion based on his analysis of the disparate factions that pumped for a “no” vote on Matteo Renzi’s constitutional reform referendum: that contrary to facile readings, the rejection was not a “populist” uprising.

By Silvia Merler, an Affiliate Fellow at Bruegel who was most recently an Economic Analyst in DG Economic and Financial Affairs of the European Commission. Originally published at Bruegel

On Sunday 4 December, Italy held a constitutional referendum in which almost 60% of the voters decided against a reform proposed by the government. The vote triggered the resignation of Prime Minister Matteo Renzi and opened a phase of political transition that will lead to new elections.

In light of the new elections ahead, it is important to understand the factors driving this vote. To investigate this, I run a regression analysis of the share of votes for NO at the province level on various socio-economic characteristics. Then I compare these findings with the drivers of the vote for the Democratic Party (Matteo Renzi’s party) in 2014 and with the drivers of the Brexit vote, which have been explored by my colleague Zsolt Darvas.

I find that the Italian NO vote was positively correlated with “economic malaise”, that is to say unemployment and relative economic backwardness. Provinces with a higher share of young people tended to record a relatively higher share of NO votes, and this appears to be linked to the incidence of youth unemployment at the province level. Contrary to the case of Brexit, the outcome of the Italian vote at the province level does not appear to be driven by uneducated voters. Moreover, despite the strong anti-immigration rhetoric of one of the main parties that campaigned actively for NO (the Northern League), I find that the provinces with a higher share of foreign residents voted relatively less in favour of NO.

These two elements suggest that it would be reductive to just interpret this vote as the latest example of a populist electoral victory, and that deeper factors must be considered – especially those of an economic nature. Unemployment does not appear to be significantly correlated with the share of votes gathered by the Democratic Party in 2014. The fact that two years later unemployment became an important driver of NO vote may indicate that some voters possibly felt let down by a government who had at the core of its agenda the improvement of labour market conditions.

I use province-level (NUTS3) data on the referendum outcomes to establish whether any link can be drawn between the vote and various socio-economic characteristics of the provinces. Ideally, I would like to go to an even more granular district level, but many of the socio-economic data used here are not readily available at such disaggregated level.

The dependent variable is the share of NO votes out of the total votes casted in each province. As a comparison I will also look at the determinants of the share of votes gathered by the Democratic Party in the 2014 elections. Both these figures come from the official data published by the Italian Ministry of Interior. Figure 1 shows that the share of NO votes ranges from 42.3% to 74.6%, with the largest concentration between 55% and 65%. 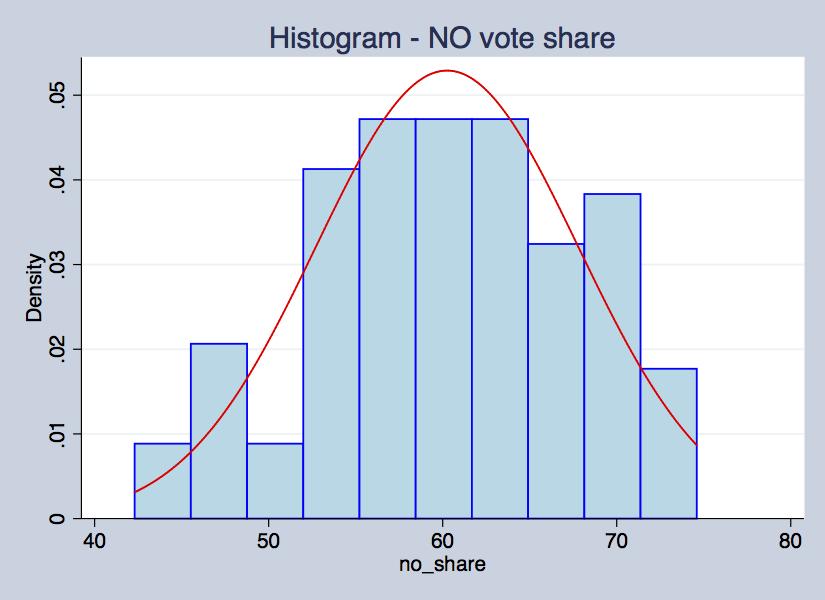 A first interesting thing to notice is that the referendum outcome is strongly correlated with the results of the European Parliament elections held in 2014. In those provinces where the Democratic Party – the Prime Minister’s party – won a larger share of votes in the 2014 elections, the share of NO votes in this referendum tended to be lower.

This may seem obvious, but it is not necessarily so: differently from elections, the vote in a constitutional referendum is supposed to be on a very specific question of substance, so there is no reason a priori to expect that it should be strongly correlated with the vote pattern observed in the elections. Yet this correlation suggests that part of the electorate may have seen this vote as an occasion to re-validate their electoral choices.

Figure 2 shows that there is one big outlier to this regularity, i.e. the province of Bolzano (Bozen). Its position is explained by very province-specific electoral reasons: the PD’s share of votes in the EP elections of 2014 was exceptionally low in this province, as the largest share went as always to SVP, a province- and language-specific regionalist and autonomist party that is not represented in the rest of Italy. Domestically, the SVP has given external support to PM Renzi’s government, but historically it belongs in the Christian Democrat tradition. So in the 2014 European Parliament elections the SVP was running for the European People’s Party (EPP), while PD was representing the Party of European Socialists (PSE). Due to this idiosyncrasy, I exclude the province of Bolzano from my regression analysis. 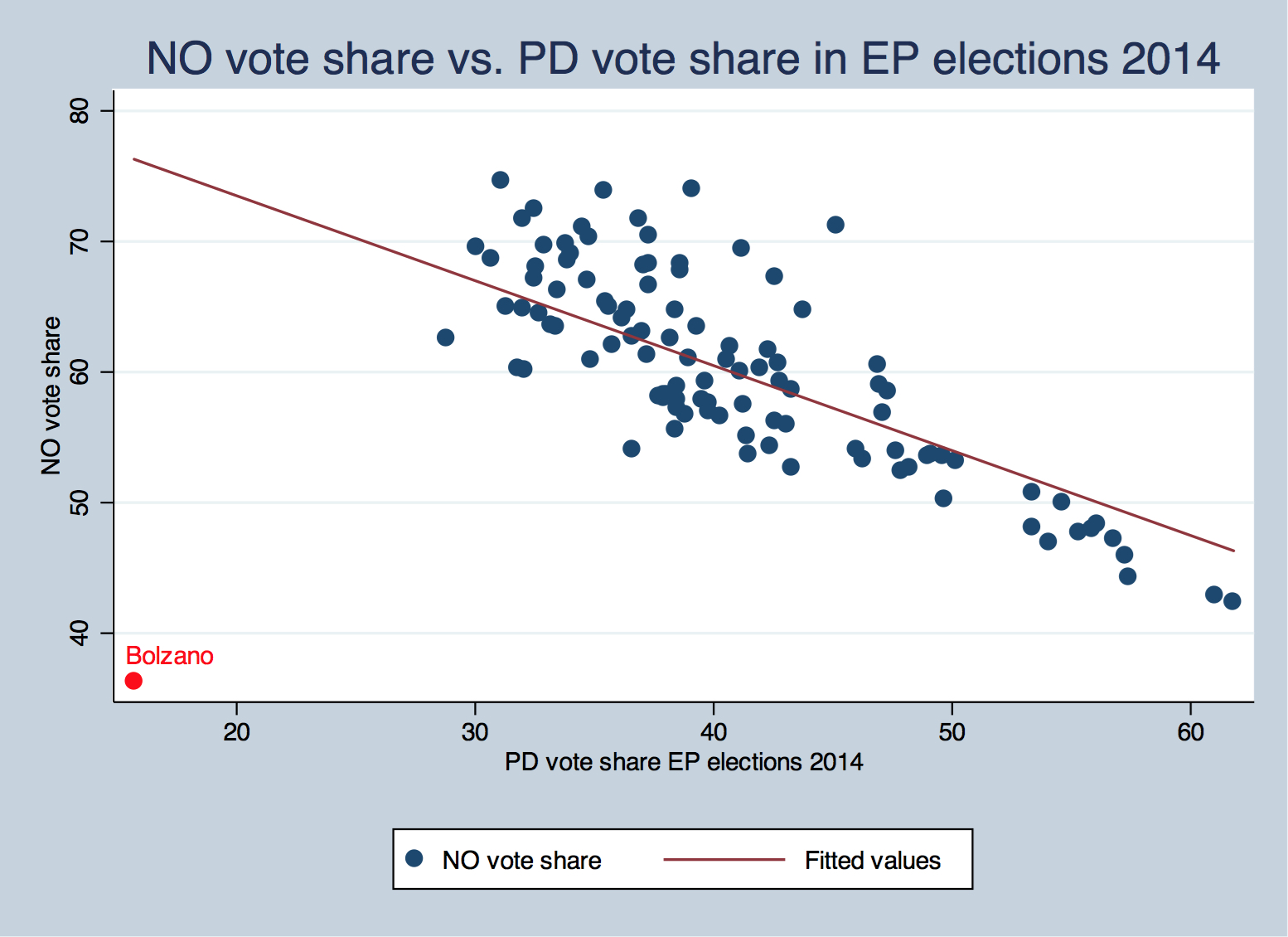 As independent variables I include several socio-economic factors (some of them are only published with lags at the province level, see the appendix for more details):

I run four regressions, whose results are reported in Table 1 below. All models have a good explanatory power, ranging from 81% to 90% of the total variation in the NO vote share. Models 1 and 2 use as dependent variable the share of NO vote in the 2016 referendum, while Models 3 and 4 replicate the analysis for the share of PD votes in the 2014 European Parliament elections. 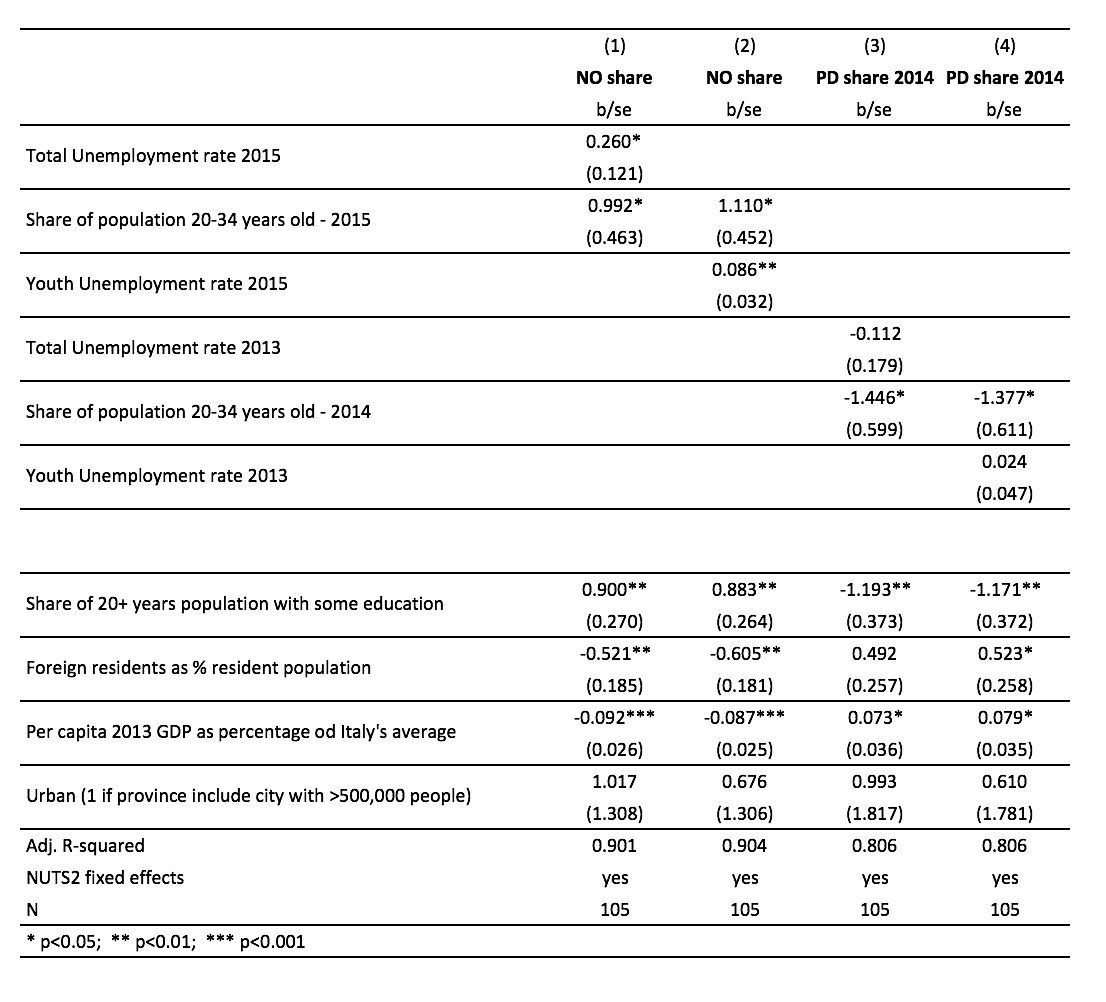 Several interesting things emerge. First, unemployment is positively and significantly correlated with the NO share of votes in the referendum, suggesting that provinces exhibiting a higher rate of unemployment tended also to record a higher share of NO votes. This is interestinglyI different from the pattern found by my colleague Zsolt Darvas in the case of Brexit, where a higher levels of unemployment was associated with a somewhat lower likelihood to vote in favour of Brexit.

Third, provinces that had a relatively higher per capita income tend to exhibit a lower share of NO votes, and the coefficient is strongly significant. This, together with the finding on unemployment, suggests the existence of a link between indicators of economic “malaise” at the province level and voting outcomes.

Fourth, the share of foreign residents is negatively and significantly correlated with the NO share, suggesting that provinces with more foreign residents voted relatively less in favour of NO. This is particularly interesting in light of the fact that one of the two parties who campaigned more actively for NO – the Northern League – has traditionally had a strong anti-immigration rhetoric. This effect is significant even when controlling for urbanisation.

Fifth, The share of population with at least some education is positively related with the NO vote share, suggesting this  outcome was not driven by voters with no education.

Models 3 and 4 replicate this analysis using as dependent variable the share of votes gathered by the Democratic Party in the 2014 elections. The aim of this comparison is to understand whether the referendum outcome and the 2014 votes were driven by the same factors. Largely, the results seem to mirror the ones for the 2016 vote. Provinces with a higher share of young voters recorded both higher NO shares and lower PD vote shares in 2014; relatively richer provinces voted relatively less for NO and relatively more for the PD in 2014 elections; the effect of foreign residents is weaker, but still it suggests that provinces with more foreign residents voted less for NO and also more for PD in the 2014 elections; the correlation between the vote and the provinces’ educational level is also the opposite of what found for 2016. Interestingly, unemployment does not seem to be a significant driver of the PD share of votes in 2014. The fact that two years later unemployment became an important driver of NO vote may indicate that some voters possibly felt let down by a government who had at the core of its domestic agenda the improvement of labour market conditions.

Overall, these results suggest that socio-economic factors played out in a way that is different than in the Brexit case. The Brexit vote appears to have been strongly driven by older voters and somewhat less educated ones. The italian NO vote appears to have been driven by young voters, and mostly related to a sense of economic “malaise”, which we see in the link with unemployment and relative economic backwardness. Populism has certainly been an important character of the Italian political scene, since the outbreak of the economic crisis. But several elements – particularly the direction of correlation between education, foreign residents and the vote – suggest that it would not be correct to interpret this just as the latest case of a populist polling success, akin to Brexit. Deeper factors of socio-economic nature seem to have played a very significant role. What we should be worrying about now, is how populists could use and build on these factors in view of the coming elections.

Bruegel considers itself a public good and takes no institutional standpoint. Anyone is free to republish and/or quote this post without prior consent. Please provide a full reference, clearly stating Bruegel and the relevant author as the source, and include a prominent hyperlink to the original post.