Yves here. While no sane person would want to buy an apartment in Trump Tower now and be subject to inconveniences like gawkers, Secret Service cordons and the inability to have your driver drop you off and pick you up, Wolf’s piece shows that Trump Tower apartments had been languishing on the market long before Trump won.

There’s been a sudden glut in the market for super-high end units, due to a perfect storm of a rash of construction combined with a crackdown on anonymous buyers using shell companies, which has choked off a lot of money laundering and foreign buying that was pretty much the same thing. But there are other signs of ill health in the New York City real estate market generally: falling rental prices at the lower end, and a remarkable rise in retail vacancies, with many in my neighborhood (Third and Madison Avenues on the Upper Eas Side) remaining empty for more than a year. One reason for shuttered storefronts (at least in my ‘hood) is that landlords tried pushing through big rental increases, apparently thinking they were entitled to catch up after years of no or modest rises in the wake of the crisis. On Third Avenue two years ago, many landlord tried doubling the rents on leases up for renewal. Many stores folded or relocated and those owners either have not found tenants or have gotten businesses in that look too misconceived to last. One was an upscale frozen food purveyor with a large space, another was a “healthy” prepared foods vendor, but there’s now tons of competition in that niche, and the staff was snooty and the offerings looked to be fattening by virtue of visibly using tons of oil. The former vendor is still open but I never see any traffic; the latter has closed.

A colleague who is a tax expert points out that retail business that soldier on with no apparent business are likely to be money launderers. The prototype is the greasy spoon pizza joint that not only seems never to have any customers but where the staff looks a bit surprised if you look like you want to eat there. There’s a low-end jewelry store on Third where in the last five years of walking by it on a regular basis I’ve seen all of two people in the store save its staffer. That would seem to fit the bill.

So this is an excuse for our periodic question: how is your local economy doing, as reflected in the apparent health of its residential and commercial real estate markets?

The iconic mixed-use 58-story Trump Tower, on 721 Fifth Avenue, in Midtown Manhattan, with top-dollar retailers such as Tiffany’s nearby, was the ultimate in condo living when it was built in 1983. Now it’s even more iconic as President Elect Donald Trump holds court there, among enormous security measures and the daily flow of potentates, moguls, Big Oil CEOs, the occasional Silicon Valley wunderkind, billionaires, retired generals, Goldman Sachs folks, and the like.

But not all is well at this piece of glamorous real estate.

Of its 238 apartments – located on the top 38 floors, including nine duplex and triplex penthouses on the top nine floors – 11 are actively listed for sale, according to CityRealty, and another 12 are listed for rent. Asking prices and asking rents have been slashed to get the units to move, and it’s not working very well.

The table below shows the 11 apartment listed for sale. Three of them consist of two units that have been combined: 42BC, 58CD and 37D/38D. Five sellers have cut their asking prices, with reductions ranging from -7.8% to -26.8%. And note for how long they’ve been on the market (right column), in a market that isn’t exactly ideal: 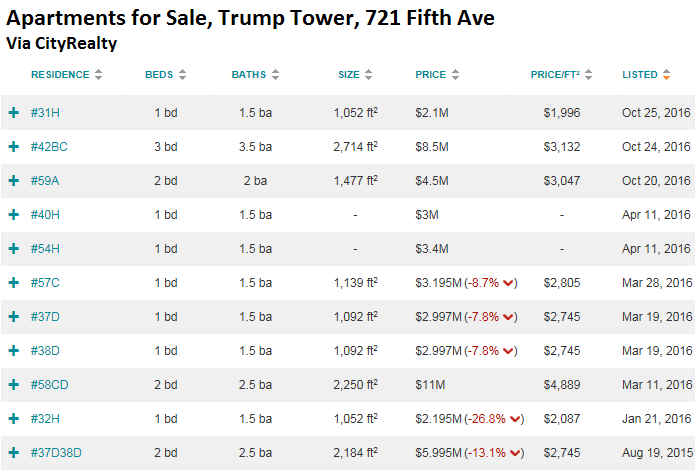 The potential buyer can expect to pay common charges of $3,620 per month and taxes of $3,328 per month, according to StreetEasy. This would come on top of the mortgage. At current asking price, with 10% down, financed with a 30-year fixed rate mortgage at 4.2%, the monthly payment would be $26,400. So that would amount to monthly outlays of $33,348. But the views are nice.

And there is a lot of competition. Zillow lists 6,330 apartments for sale in Manhattan alone. And the trend has not been the friend recently. Trulia figured that the median selling price of New York City apartments dropped 4.1% from a year ago, as sales volume has withered: 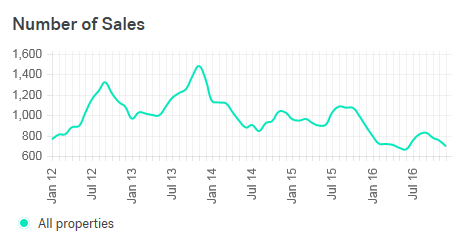 There are another 12 apartments for rent at Trump Tower, including one with two original units combined (34EF). In the table below by CityRealty, note the reductions in asking rents, ranging from -1.7% to -11.8%. These are just asking rents and do not include any concessions: 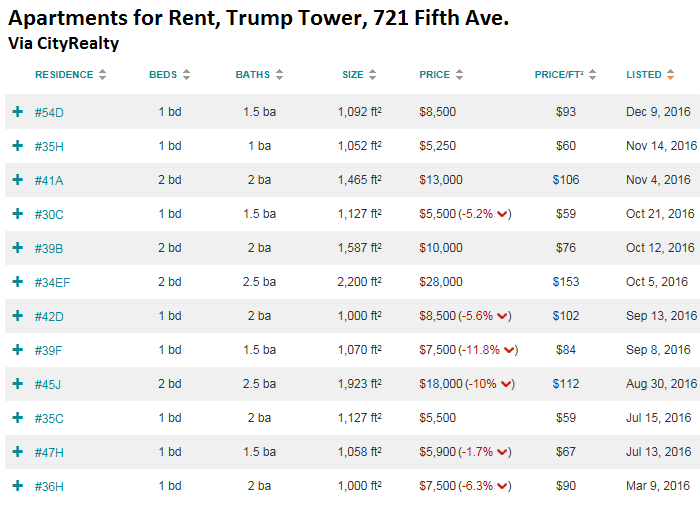 These units have a lot of company. Apartments.com lists 11,014 apartments for rent just in Manhattan. As I reported earlier this month, according to Zumper, the median asking rent for a one-bedroom in New York City dropped 7.4% from a year ago, and for a two-bedroom 7.9%.

But that’s just the asking rent. They’re kept as high as possible for appearances’ sake. To motivate potential tenants, rent concessions are piled on separately. These rent concessions just set a new record in Manhattan, according to the Elliman Report, with concessions now offered on 25.1% of all new rentals, up from 13.5% a year ago.

Is all this just a dip in New York City’s real-estate boom? Maybe not – as ominous clouds are forming. The New York Post, citing data from Attom Data Solutions, reported the foreclosures are once again surging:

More than 1,100 NYC households fell into foreclosure in October, a 32% increase from September, and a 37% increase from last year. Queens, which has been hard-hit since the foreclosure crisis began in 2007, had 400 new cases last month, nearly double the number of a year ago.

So Trump Tower may be getting hit a little harder than other buildings in New York, given the brouhaha about the election campaign and now the even greater brouhaha around the President Elect holding court in it. But the entire Manhattan housing market, after years of booming at a blistering pace, is seeing the sudden and very unpleasant arrival of second thoughts.

And not just in New York, but now also in San Francisco, Boston, Chicago, Washington DC, and perhaps a city near you. Read…. The Great Unwind Unravels Hottest Rental Markets in the US