Yves here. Note how this article treats the idea that an overly large financial sector is bad for growth as widely accepted.

Recent research suggests a point beyond which the benefits of financial development diminish, and further development can even hurt growth. This column describes how a negative relationship between credit and growth emerged strongly after 1990 and was particularly pronounced in the Eurozone, consistent with the notion that an overgrown financial sector weakens economic growth potential. It also argues that slower growth leads to more rapid financial sector expansion. Policymakers need to be aware of the possibility that causality runs in both directions. 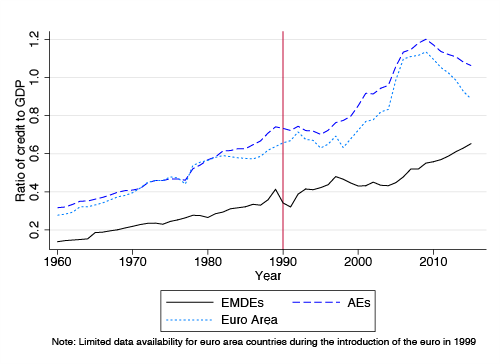 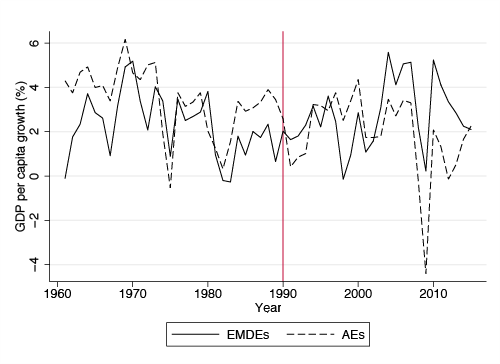 The early empirical literature, starting with Goldsmith (1969), suggested that banks and financial markets allocate capital to the most productive endeavours; and the financial infrastructure accompanying credit reduces informational inefficiencies, such as moral hazard and adverse selection. Rajan and Zingales (1998) found that greater financial development promotes sectors that are not able to generate sufficient internal finance; Levine et al. (2000) went a step further and said that more finance increases an economy’s growth potential.

Recently, some scholars (e.g. Cecchetti and Kharroubi 2012) have told a more nuanced story. Financial development, they say, catalyses economic growth up to a point, beyond which more finance acts as a drag on growth. Several other authors have concluded that ‘too much finance’ can hurt growth (De Gregorio and Guidotti 1995, Gennaioli et al. 2012, Arcand et al. 2012, Dabla-Norris and Srivisal 2013). These authors argue that excessive finance sucks human capital away from the productive economy and, by creating macro and financial fragility, credit growth leads to bigger booms and busts, which leave countries ultimately worse off.

We take the Cecchetti and Kharroubi study as our starting point and ask: When and where did the adverse effect of finance on growth arise? And which way does the causality work? The simple scatter plots presented here tell the same story as the regressions they run with more control variables.

For 58 countries, from 1960 to 2015, Figure 3 plots five-year averages of credit-to-GDP and per capita GDP growth. As in Cecchetti and Kharroubi (2012), we observe some non-linearity. The turning point at which the marginal impact of finance on growth becomes negative – the so-called ‘too much finance’ effect – appears around a credit-to-GDP ratio of close to 95% (Chong and Varela Sandoval 2016). 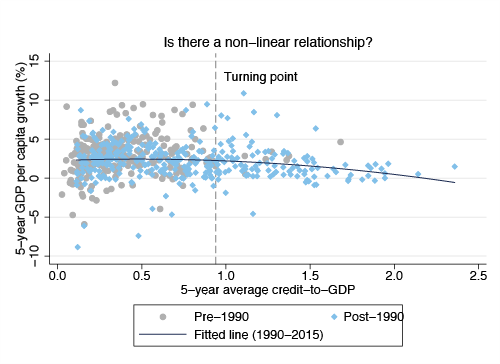 Figure 4 shows that when all countries are pooled by period, the finance-growth correlation is positive before 1990 and turns negative only after 1990. But this story hides a more complex reality. From Figure 5, we see a positive correlation between credit and growth for emerging and developing economies both before and after the 1990s; in contrast, the correlation is negative for the advanced economies even before 1990, but especially more negative after 1990. This suggests that two different sets of countries lie on either side of the non-linearity others have observed: emerging and developing economies with lower credit-to-GDP ratios benefit from more credit growth; advanced economies with higher credit-to-GDP ratios fare worse when credit increases, and this has been especially so since about 1990. But it is also the case that the negative relationship between credit and growth in the advanced economies begins even before the 90% credit-to-GDP threshold.

What Have We Learned?

One interpretation of the data is that beyond about 90% of GDP, additional credit is largely counterproductive. The evidence certainly supports that inference. Especially after 1990, many advanced economies exceeded the 90% of GDP credit threshold, and more credit beyond that level is associated with lower growth. Also, emerging and developing economies have credit-to-GDP ratios below 90% of GDP and in those countries, more credit has been associated with higher growth.

The data are, however, also consistent with an alternative interpretation, one in which the causality runs the other way. Emerging and developing economies start from relatively low incomes and have, on average, higher growth potential. As they grow to realise that potential, the demand for finance leads to greater financial development. This would be in line with Joan Robinson’s view that “finance follows enterprise”.

For advanced countries, especially for Eurozone countries, the data show that GDP growth has tended to decline even before the 90% threshold has been reached. This was evident in the years before 1990, when credit in Eurozone countries did not exceed 90% of GDP.

The possibility exists, therefore, that in advanced economies – and more so in Eurozone economies – growth potential has been low and even falling. The fall in growth potential has created greater demand for finance. One mechanism by which this demand could arise has been proposed by Gennaioli et al. (2014). Because savings rates do not typically fall with slower growth, accumulated savings grow faster than GDP; hence, the wealth-to-GDP ratio increases – a proposition that Piketty and Zucman (2014) have documented. But this increasing wealth-to-GDP ratio creates a demand for finance as households seek to preserve their wealth. Households use the financial system to park their savings and borrow for consumption and buying new homes. The financial system grows even as economic growth continues to decline.

The observation that the negative relationship between finance and growth is steeper for the Eurozone relative to other advanced economies lends further support for this opposite causation. The Eurozone had a sharper slowdown in productivity growth in the 1990s and its population growth has also been lower than in other advanced economies. This would imply, as Piketty and Zucman confirm, that wealth-to-GDP ratios have risen particularly fast in the Eurozone countries.

Policymakers need to be aware of the possibility that causality runs in both directions. Countries that pursue financial development – and many emerging and developing economies will certainly want to do so – need to also continue to pursue productivity-enhancing reforms. Finance could prove an illusory source of growth in the absence of real entrepreneurship. Where growth potential falls, the financial sector may continue to increase in size to play its wealth-preserving role. This is an important function, but it also creates the potential for financial instability.

Our findings also have an implication for the presumption after the start of the Great Recession that resuming credit flows was essential for economic recovery. In the Eurozone, where the recovery has lagged, efforts to create a greater supply of credit have been an important policy focus. Recapitalisation of banks, in particular, has been seen as crucial to the recovery of both the banking system and the economy. But where in the past the financial sector served a primarily wealth-preserving function, and where substantial wealth has now been destroyed, pushing more credit in the hope that this will generate growth could be counterproductive. This attempt to push more credit into the economy would be particularly harmful if growth potential is low. The risk is that zombie banks will be propped up, and the costs of cleaning them up and closing them down will only increase over time.