There has been a revival of nationalism in western democracies. The outcome of the Brexit referendum and the election of Donald Trump as president of the US are two major manifestations of this tendency. In Europe this trend began in the 1990s, and it has been associated with increasing support for radical right parties (Mudde 2007).

In recent paper, we show that globalisation is a key determinant of this phenomenon (Colantone and Stanig 2017). We focus on the competitive shock created by the surge in imports from China between 1988 and 2007. This shock has had a heterogeneous impact across European regions that depends on the historical composition of employment in the region. Using data on legislative elections in 15 western European countries, we find that stronger regional exposure to the import shock determines an increase in support for nationalist parties, a general shift to the right in the electorate, and an increase in support for radical right parties. The policy proposals of these parties tend to bundle support for domestic free market policies with a strong protectionist stance, a combination that has come to be referred to as ‘economic nationalism’. As parties offering this policy mix become increasingly successful, we might see the end – and possibly even a reversal – of globalisation.

We built a region-specific indicator for the exposure to Chinese imports following the methodology introduced by Autor et al. (2013). This combined information on yearly national imports from China, by industry, with data on the historical composition of employment in each region. The exposure of regions to the growth in Chinese imports depends on their ex ante industry specialisation. Intuitively, larger import shocks would happen in regions which have a larger share of their workers in the manufacturing sector. Given the same share of manufacturing workers, the variation in exposure to Chinese imports between regions would depend on differences in the specialisation of each region’s manufacturing industry.

The shock would be stronger in regions where relatively more workers were initially employed in those industries in which growth in imports from China was strongest (for example, textiles or electronic goods), and in years when the surge in Chinese imports in those industries was largest.

We performed the analysis at the NUTS-2 level of regional disaggregation. In total, our sample included 198 regions across 15 countries.1 Depending on the country, we sourced employment data either from Eurostat or from national sources. Trade data come from Eurostat Comext or from CEPII-BACI. The industry level of disaggregation is the NACE Rev. 1.1 subsection level. Figure 1 displays the variation in the import shock across regions, based on average regional figures; darker shades indicate stronger exposure.

Figure 1 Map of the Chinese import shock across regions 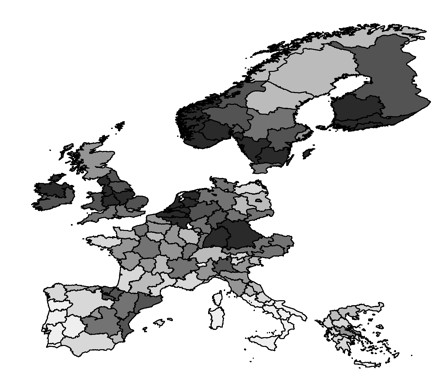 We assembled election data at the district level for 76 general elections between 1988 and 2007.  Data comes from the Constituency-Level Election Archive (CLEA, Kollman et al. 2016), the Global Election Database (GED, Brancati 2016), and national sources. For each district, in each election, we had information on vote shares at the party level.

We linked election results with ideology scores for each party so that we could assess the ideological leaning of a district in an election. To do this we used data from the Comparative Manifesto Project (CMP), which attributes policy positions by using content analysis of party election manifestos. Following the established methodology used by Laver and Budge (1992) and Lowe et al. (2011), we computed two scores for each party in each election: a ‘nationalism’ score, and a ‘right-wing positioning’ score. We then combined these ideology scores with party vote shares to compute several district-level summaries for each election.

We computed, for both nationalism and right positioning:

Finally, we also computed one district-level summary to address directly the connection between globalisation and radical right success. This was the vote share of radical right parties. We identified these parties using earlier research.2 Figure 2 shows the growth in the vote share for these parties over the sample; each point in the figure is a 3-year moving average. 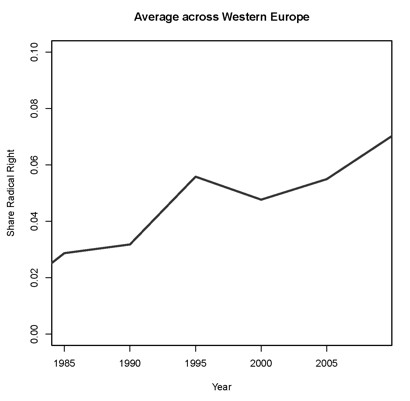 To investigate the impact of globalisation on voting, we regressed the district-level summaries on the region-specific Chinese import shock, computed for the two years prior to each election. To account for the potential endogeneity of the import shock, we instrumented Chinese imports to Europe using Chinese imports to the US, as in Autor et al. (2013), Colantone et al. (2015), and Bloom et al. (2016), among others. This strategy aims to capture the variation in Chinese imports that is due to changes in supply conditions in China, rather than the changes that are due to endogenous domestic factors in Europe. We always included election fixed effects to control for factors that affect all districts of a country at a given point in time – for instance, national economic performance. Independently on the specific summary indicator we employed, we found that a stronger import shock led to:

Our results contribute to an emerging body of research on the electoral consequences of globalisation. For the US, others have already investigated the effects of trade exposure on polarisation, turnout, and the anti-incumbent vote (Autor et al. 2016, Che et al. 2016, Margalit, 2011, Jensen et al. 2015). In France, Malgouyres (2014) investigated the effect on radical right support, and Dippel et al. (2016) did the same for Germany. In our previous work, we have also adopted a similar identification strategy to show a positive effect of the Chinese import shock on support for the ‘Leave’ option in the Brexit referendum (Colantone and Stanig, 2016a and 2016b).

We found additional evidence by using individual-level data from the European Social Survey. Accounting for basic demographic characteristics and election fixed effects, a stronger import shock in the region of residence pushed voters towards more nationalist and conservative policy positions, and increased the probability of support for radical right parties, in line with our district-level evidence. We also investigated, through interaction terms, how the effects of import competition varied across different categories of voters, based on their employment status and occupation. These effects were largely stable across the groups, even when considering service workers and public sector workers, whose jobs were not directly affected by manufacturing imports from China. Our evidence suggests that the impact of import competition was not confined to groups, such as the unemployed or manufacturing workers, which might have been more directly affected by Chinese imports. On the contrary, as globalisation threatens the success and survival of entire industrial districts, the affected communities seem to have voted in a homogeneous way, regardless of each voter’s personal situation.

Globalisation has caused a surge in support for nationalist and radical right political platforms. This might endanger the survival of the open world of the past 30 years. President Trump’s withdrawal from the Trans-Pacific Partnership seems to be a move in that direction. Yet, a return to protectionism is not likely to solve the problems of those who have lost ground due to globalisation without appropriate compensation of its ‘losers’, and is bound to harm growth especially in emerging economies. The world rather needs a more inclusive model of globalisation.