In theory there is no difference between theory and practice. In practice there is. – Yogi Berra1

As Theresa May’s self imposed deadline of March 31 for triggering Article 50 approaches, the Financial Times’ Martin Wolf has assembled some trade data that supports the argument that we and many others have made: that the UK is in a very poor bargaining position in Brexit, yet is deludedly overplaying its hand.

A few UK readers get annoyed when we go through the many real world constraints that the UK faces in negotiating a Brexit and in the possible futures it might have outside the EU. They get angry and declare us to be enemies of national sovereignity and/or defenders of evil Eurocrats.

The problem is that virtually all of these Brexiteers are selling Brexit theory, and Brexit theory is in turn a bunch of empty promises that the likes of Nigel Farage and Boris Johnson sold them, starting with that they’d turn over £350 million a week in savings to the NHS. They walked that one back right after the election results came in.

The fact is that the UK is a small open economy. That means, like it or not, the UK will remain in large measure subject to the rules and regulations of the EU because it will sell goods and services to them. The UK is too small to have one set of products made to lower/different UK standard and another for EU export. The only areas in which the UK will be able to “free” itself from EU rules are environmental and labor regulations, where the majority of UK voters like the EU standards, which are almost certain to be more citizen-friendly than what the Tories will implement on behalf of their big business buddies.

Similarly, as various experts have already warned, the UK is almost certain not to see a reduction in immigration post Brexit.

The only way to change these boundary conditions would be if the Tories were to embark on a total-war-level effort to make the UK economy more self sufficient. Nothing of the sort is in the offing.

And on top of that, the negotiation planning ranges from pathetic to counterproductive. The Tories seemed unaware of the fact that there was no such thing as a “default to the WTO” if their Brexit talks founder, even though parties as remote as this site has flagged that as an impediment prior to the Brexit referendum. They government has apparently been trying to get some sort of special treatment from the WTO and not surprisingly isn’t getting much of anywhere. Apparently it’s news to them that the WTO operates by consensus, and with 162 members, that’s hard to achieve, and lacks any sort of established procedure for making decisions otherwise. And let us not forget that the WTO Director-General warned the UK several times before the vote that WTO deals take years to negotiate (as in typically more than five, and the approval process can easily take more than a year), that there were other countries in the pipeline and the UK would not be able to jump the queue. It’s not hard to imagine that new entrants who got in the hard way would not support the UK demanding all sorts of waivers.

Mind you, the WTO cock-up is one of numerous examples of the Government living deep in its own bubble and sadly, via a boosterist press, persuading large swathes of the British public that it’s reckless and destructive course of action is prudent and noble. I could easily cobble together a 5,000 word post from the archives on other major Tory delusions and misrepresentations, but I’ll refrain in the interest of not trying your patience.

The high level problem is that Theresa May is playing a game of chicken and just like the Greeks dealing with the Troika, has managed to persuade herself that the UK is in the better position and the EU will capitulate. EU officials have tried telling the UK in God knows how many ways that they have non-negotiable boundary conditions. Yet May & Co. keep ignoring consistent messages from numerous EU officials, including Merkel. The UK has managed to achieve the difficult feat of creating near unanimity within the EU (the fractiousness of Poland and Hungary won’t affect the negotiating stance).

Former Irish Prime minister John Bruton described the downside of May committing the UK to a hard Brexit when the EU is very unlikely to offer concessions:

In working out the orientation to be given to the negotiators, the crucial thing is for the European Council to work out what would be it’s ” best alternative to a negotiated agreement” (BATNA). It is important to have an alternative ready because there is every possibility that no agreement will be reached within the two year time frame for negotiation, and ratification, of a withdrawal agreement.

“No deal” would mean the UK simply crashing out of the EU overnight, sometime before the end of March 2019. This “no deal” scenario would be an overnight halt to flights, to trade and to commerce. There would be immediate, massive currency instability.

From the point of view of pure negotiating tactics, maybe it not surprising that Mrs May would threaten “no deal”. But to do so, in the absence of a well crafted fall back position, is something the UK cannot really afford. It vindicates Tony Blair’s description of the UK government as “not driving the (Brexit) bus”, but rather “being driven” by partisan and ideological forces it has not tried to control. In the absence of a real alternative to a hard Brexit, it is on auto pilot heading towards a cliff.

While most experts agree that negotiating the terms of a divorce in the two year exit period should be possible, getting a new trade deal in place is a completely different matter. While the US has been able to to that, that is because US bi-lateral trade deals are not negotiated. The US dictates terms and the counterparty might at most get a few tweaks. Negotiated trade pacts take longer. And even more important, the UK needs a services deal for its overly large banking sectors. Services agreements take much longer than trade deals. Even if the two sides had adequate staffing and good will, it would be pretty much impossible to get everything done in 24 months (yes, an extension is in theory possible, but that would require approval of all the 27 remaining members of the EU and no one thinks that will happen).

Let us not forget there’s already the hugely contentious of the UK’s overdue payments to the EU plus other exit charges, which the EU estimates at €60 billion. Given the EU’s better bargaining position, it can simply stand pat and let the clock run out if the UK does not make a reasonable counterproposal. And that’s only one of many fractious issues to be settled.

Martin Wolf believe that the UK can’t try the “Whoops, just kidding!” approach if it realizes it backed itself in a corner with Brexit. Do not forget that the Article 50 process provides for automatic departure in 24 months in the absence of an agreement, and there is no provision allowing for an Article 50 process to be revoked. Per Wolf:

I have no objection in principle to the idea that the application to leave could be reversed once the nature of Brexit became clearer. It is certainly no less patriotic to wish to remain than to leave. Moreover, the result of a referendum on a particular date cannot be sacrosanct for all time. It is possible that the electorate will change its mind. Those Brexiters who insist on parliamentary sovereignty can also not object in principle to a parliamentary vote on the terms of the deal that is actually reached, set against the option of remaining in the EU.

Yet, in practice, this option is highly implausible. This is partly because it would shatter the stability of the Conservative party at a time when there is no credible opposition. Yet what is even more important is the view of the rest of the EU. I find it impossible to imagine that after two years of hard negotiations, the UK would be allowed to get away with saying to its counterparties that the deal they have offered is so bad that it has decided to stay inside, almost as a form of punishment. This would violate all norms of decent behaviour. I suspect that any attempt to withdraw the Article 50 application in these circumstances would be rejected by the members, supported by the European Court of Justice. The latter would view such whimsical behaviour as incompatible with the survival of the EU itself.

And Wolf shows that contrary to the brave talk of Brexit fans, the UK indeed has more to lose than the EU does from the failure to reach an understanding:

The overriding objective must be to achieve the best possible deal on trade. The reality, however, is that the UK has a weak hand: without a deal, it would have its trade disrupted and relationship with the continent in tatters. Its counterparts know this. The UK does far more of its trade with the rest of the EU than the rest of the EU does with the UK. It has more to lose. Former prime minister Sir John Major has laid out the best approach: “The most successful results are obtained when talks are conducted with goodwill: it is much easier to reach agreement with a friend than a quarrelsome neighbour. But, behind the diplomatic civilities, the atmosphere is already sour.” Charles Grant of the Centre for European Reform, adds: “At a time of global uncertainty . . . Britain’s decision baffles its partners. They feel snubbed, hurt and (at least in some cases) insecure.” 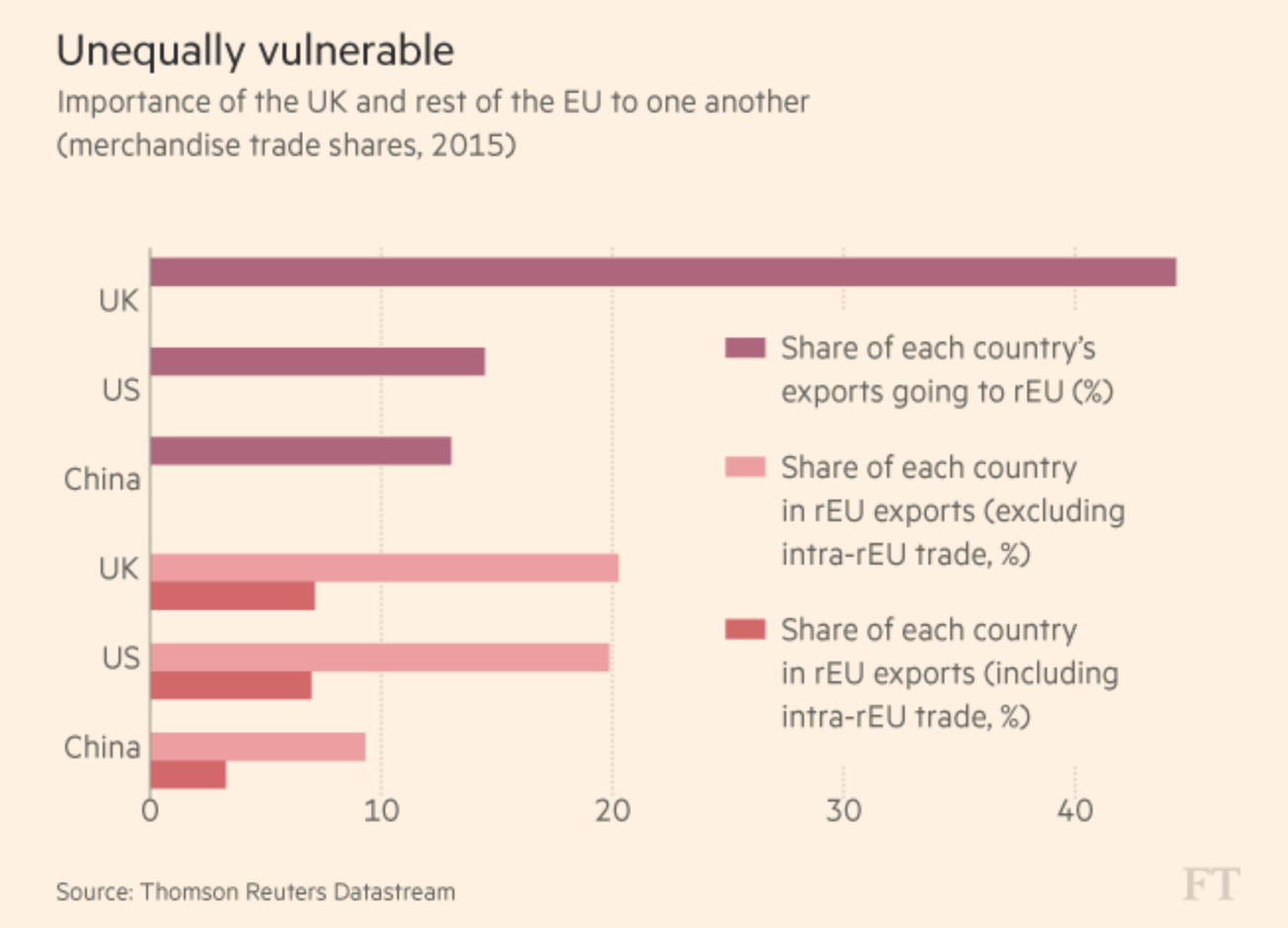 As much as Donald Trump is the favorite whipping boy of the media, no matter how bad a President he ultimately turns out to be, the US has both enough checks and balances and economic/institutional inertia that the damage will be incremental. In fact, the real danger of Trump is it will allow the Democrats to go much further in a pro-corporate/neolibearal/pro-surveilllance state direction and declare it to be progress Because Trump.

By contrast, the Tories are ideologically and operationally incapable of doing the sort of national emergency planning necessary to manage a Brexit transition and implement a national industrial strategy. It is thus very likely that history will treat May as a far worse failure as a leader than even the Derided Donald.

____
1 Yes, I know that the attribution to Yogi Berra is depicted as inaccurate. But it’s too pedantic to go through the list of possible sources for this quote.