Zack Beauchamp has written an important though bad piece in Vox, titled “No easy answers: why left-wing economics is not the answer to right-wing populism”. Beauchamp’s piece is important because liberal icon Paul Krugman, in his bullshit-in-a-china-shop way, immediately leveraged it into an open assault on universal benefits like Medicare for All (and also, implicitly, Social Security[1]). Beauchamp’s piece is bad, aside from its policy implications, because it contains major misstatements, major errors of interpretation, and because it both begins and ends with a straw man attack on Bernie Sanders that seriously distorts his views. I’m going to begin with a brief discussion of identity politics, because that will set the context for how Beauchamp strawmanned Sanders.

Adolph Reed, in a well-known article, formulates the difficulties of achieving justice through identity politics as follows:

[R]ace politics is not an alternative to class politics; it is a class politics, the politics of the left-wing of neoliberalism. It is the expression and active agency of a political order and moral economy in which capitalist market forces are treated as unassailable nature [TINA]. An integral element of that moral economy is displacement of the critique of the invidious outcomes produced by capitalist class power onto equally naturalized categories of ascriptive identity [for example, perceived skin color] that sort us into groups supposedly defined by what we essentially are rather than what we do. As I have argued, following Walter Michaels and others, within that moral economy a society in which 1% of the population controlled 90% of the resources could be just, provided that roughly 12% of the 1% were black, 12% were Latino, 50% were women, and whatever the appropriate proportions were LGBT people. It would be tough to imagine a normative ideal that expresses more unambiguously the social position of people who consider themselves candidates for inclusion in, or at least significant staff positions in service to, the ruling class.

Indeed. Can such a society be just? After all, Reed describes the workings of an oligarchy. Can an oligarchy be just? I argue no:

So, if we ask an identitarian whether shipping the Rust Belt’s jobs off to China was fair — the moral of the story — the answer we get is: “That depends. If the private equity firms that did it were 12% black, 12% Latino, and half women, then yes.” And that really is the answer that the Clintonites give. And, to this day, they believe it’s a winning one.

Now, readers who are on the Twitter — the liberal and/or left parts of it, anyhow — will remember that after the Clinton debacle on November 8, 2016, an enormous and very messy battle immediately broke out, expressed in crude terms as “identity politics” versus “class politics” (shorthand: “economics”), and in more humane terms as what the relationship between class and identity might be, and how to express it. The more vulgar sort of liberal Clintonite would argue — still argues — that economics plays, and should play, no role in the construction of identity; the more vulgar left Sanders supporter, in a move reminiscent of the crude base/superstructure model of the 30s, would argue identity is a mere function of economics. In terms of party leadership, the issue was settled when the left’s candidate, Ellison, was ritually sacrificed by the liberal establishment, but the battle, perhaps attenuated to a heated discussion, necessarily continues today, wherever politics is practiced seriously. With this as context, let’s turn to Beauchamp.

On November 20, less than two weeks after Donald Trump’s upset win, Bernie Sanders strode onto a stage at Boston’s Berklee Performance Center to give the sold-out audience his thoughts on what had gone so disastrously wrong for the Democratic Party.

Sanders had a simple answer. Democrats, he said, needed to field candidates who would unapologetically promise that they would be willing “to stand up with the working class of this country and … take on big-money interests.”

Democrats, in other words, would only be able to defeat Trump and others like him if they adopted an anti-corporate, unabashedly left-wing policy agenda. The answer to Trump’s right-wing populism, Sanders argued, was for the left to develop a populism of its own.

Well, I went and looked at what Sanders said. (The complete video of the Sanders speech is at the Boston Globe: “You can now watch Bernie Sanders’s full Boston speech on identity politics and the progressive movement.”) Boston Magazine sets the scene: “An audience member asked if Bernie Sanders, her hero, had any tips for realizing her dream of becoming the second Latina ever elected to the Senate. ‘Let me respond to the question in a way that you may not be happy with,’ Sanders said.” Here’s a partial video, with a transcript (slightly cleaned up) that gives the complete context of Sanders remarks. I have helpfully underlined the portion that Beauchamp quoted, so you can see what he omitted:

[SANDERS]It goes without saying, that as we fight to end all forms of discrimination, as we fight to bring more and more women into the political process, Latinos, African Americans, Native Americans – all of that is enormously important, and count me in as somebody who wants to see that happen. But it is not good enough for somebody to say, “Hey, I’m a Latina, vote for me.” That is not good enough. I have to know whether that Latina is going to stand up with the working class of this country and is going to take on big-money interests. And one of the struggles that we’re going to have right now, lay it on the table in the Democratic Party, is that it’s not good enough for me to say, well, we have x number of African Americans over here, we have y number of Latinos, we have z number of women, we are a diverse party, a diverse nation. Not good enough! We need that diversity, that goes without saying, that is accepted. Right now we’ve made some progress in getting into politics. I think we’ve got 20 women in the Senate now, we need 50 women in the Senate. We need more African Americans. But here is my point – and this is where there’s going to be a division within the Democratic Party – it is not good enough for somebody to say, “I’m a woman, vote for me.” No, that’s not good enough. What we need is a woman who has the guts to stand up to Wall Street, to the insurance companies, to the drug companies, to the fossil fuel companies…In other words, one of the struggles that you’re going to be seeing in the Democratic Party is whether we go beyond identity politics. I think it’s a step forward in America if you have an African American CEO of some major corporation. But you know what? If that guy is going to be shipping jobs out of this country and exploiting his workers, it doesn’t mean a whole heck of a lot if he’s black or white or Latino.

A few points. First, you can see how Sanders’ X, Y, Z trope directly reproduces Reed’s thinking on identity politics (and Reed’s views on justice, as well). Second, Sanders is intervening very directly in the left/liberal battle over identity politics alluded to above. Third, it’s disingenuous of Beachamp to characterize what Sanders is saying as a “simple answer”; anybody who follows these issues knows they’re complex, personally and politically. Sanders knows that, too, since he prefaces his answer with “you may not be happy with.” Finally, Beauchamp rips Sanders’ words from their context to construct his “populism” straw man; what Sanders is advocating at Berklee isn’t “populism” — whatever that means, and Beauchamp never defines it — but a form of (working) class politics that includes and transcends (Hegel might say “subsumes”) identity politics; both/and, not either/or. Which makes perfect sense, because you have to approach people from where they are and how they see themselves, no? Anyhow, if strawmanning and taking out of context don’t bother you, read on!

Beauchamp and the History of Social Democracy

Beauchamp presents the following chart (which I have helpfully annotated in red): 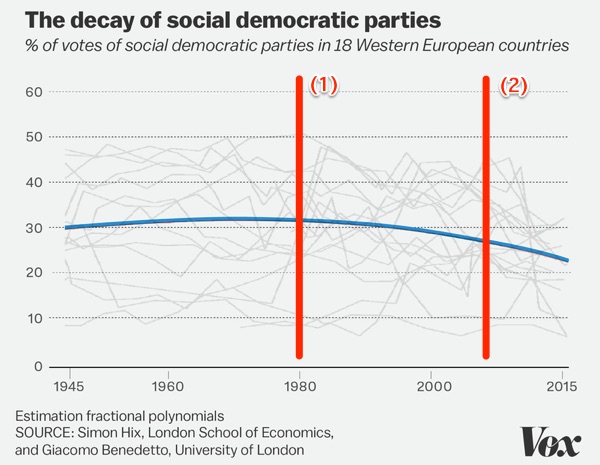 Based on that chart, he asks the following question:

The chart [above], from the London School of Economics’ Simon Hix and the University of London’s Giacomo Benedetto, show how those [social democratic] parties have done in elections in 18 Western European countries between 1945 and 2016. This creates a puzzle: Why did voters who by and large benefit from social democracy turn against the parties that most strongly support it?

Beauchamp, of course, assumes that the social democratic parties pursued the same policies in the 1945-2016 period. But that’s simply not so:

During the inflationary crisis of the 1970s, elite policymakers in Western Europe came to the conclusion that it was no longer possible for the welfare state to operate as it had since 1945. Their project thereafter has been twofold: to convince the public that their diagnosis is right, and to enact (what they consider) necessary neoliberal reforms by any means necessary.

In other words, there’s an inflection point in the mid-70s — I’ve helpfully added the red line marked (1) to the rawther flat curve in Beauchamp’s chart to show it — where the neoliberal dispensation began, just as in the United States. The answer to Beauchamp’s question “Why did voters who by and large benefit from social democracy turn against the parties that most strongly support it?” is that the parties stopped supporting it, even though the voters supported it, there as here. There is no puzzle at all.

Based on the same chart, Beauchamp also urges:

So it’s not that European social democrats failed to sell their economic message, or that economic redistribution became unpopular. It’s that economic issues receded in importance at the same time as Europe was experiencing a massive, unprecedented wave of nonwhite, non-Christian immigration.

That, in turn, brought some of the most politically potent nonmaterial issues — race, identity, and nationalism — to the forefront of Western voters’ mind [sic].

It’s not clear to me whether Beauchamp regards immigration from 1945-2016 as a single, continuous phenomenon, or not. I doubt that it is; if we limit scope to asylum claims, the numbers look like this: 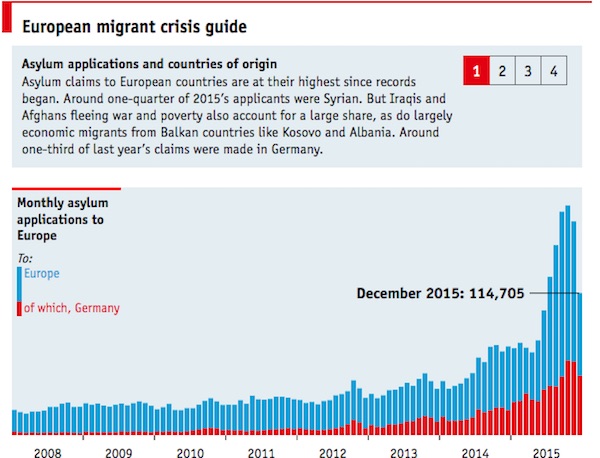 [E]conomic suffering and xenophobia/racism are not mutually exclusive. The opposite is true: The former fuels the latter, as sustained economic misery makes people more receptive to tribalistic scapegoating. That’s precisely why plutocratic policies that deprive huge portions of the population of basic opportunity and hope are so dangerous. Claiming that supporters of Brexit or Trump or Corbyn or Sanders or anti-establishment European parties on the left and right are motivated only by hatred but not genuine economic suffering and political oppression is a transparent tactic for exonerating status quo institutions and evading responsibility for doing anything about their core corruption.

Beauchamp concludes, and no, I’m not making this up, this is really his last sentence:

If Democrats really want to stop right-wing populists like Trump, they need a strategy that blunts the true drivers of their appeal — and that means focusing on more than economics.

[1] At this point, we remember this story from David Sirota, from November 2, 2016: “Hillary Clinton Economic Team Planned Secret Meeting With Wall Street Mogul Pushing To Shift Retiree Savings To Financial Firms.” In other words, the Democrat Establishment has never surrendered the idea of a Grand Bargain, and so whatever their first priority may be, it’s not economic justice. As I keep saying, election 2016 has been wonderfully clarifying.