Bloomberg reported that a new accounting rules that will come into effect in 2019 will force companies to put a collective $3 trillion of obligations on their balance sheets as debt.

The liability is operating leases, such as the sale and leaseback of a corporate headquarter, or leasing of a major capital asset, such as a delivery fleet. When I started out at Goldman, back in the days of green accounting paper and calculators, we always re-did the reported balance sheet to include capitalized operating leases. This was a bog-standard, first order presentation. And while any competent analysis of debt includes this adjustment, equity analysts typically do not give much weight to the additional risk created by operating leases. Unfortunately this habit has taken hold not just because equity is a different obligation, but also due to the fact, as Wall Street old hands will tell you, “Stocks are sold, not bought.”

In other words, the wee problem is that even though this rule change ought to make no difference, since it’s merely a change in reporting, it almost certainly will. Despite the pretense that investors are rational and give a good look at a company’s financials before buying, in fact people are at the mercy of cognitive biases. It’s been demonstrated that people will respond very differently to precisely the same economic risk depending on how it is presented to them.

The Bloomberg story shows some big users of operating leases: 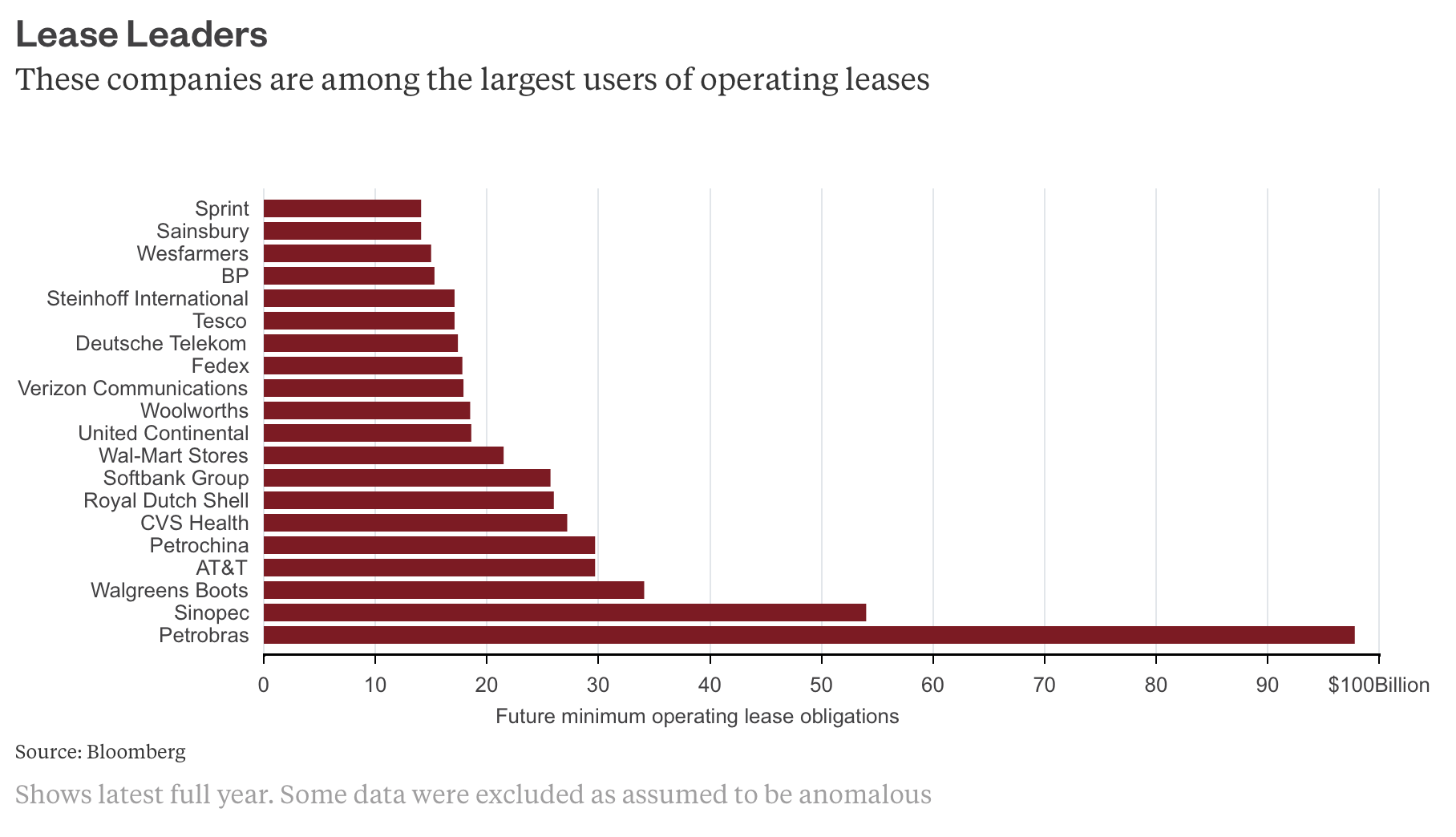 And which sectors employ them most heavily: 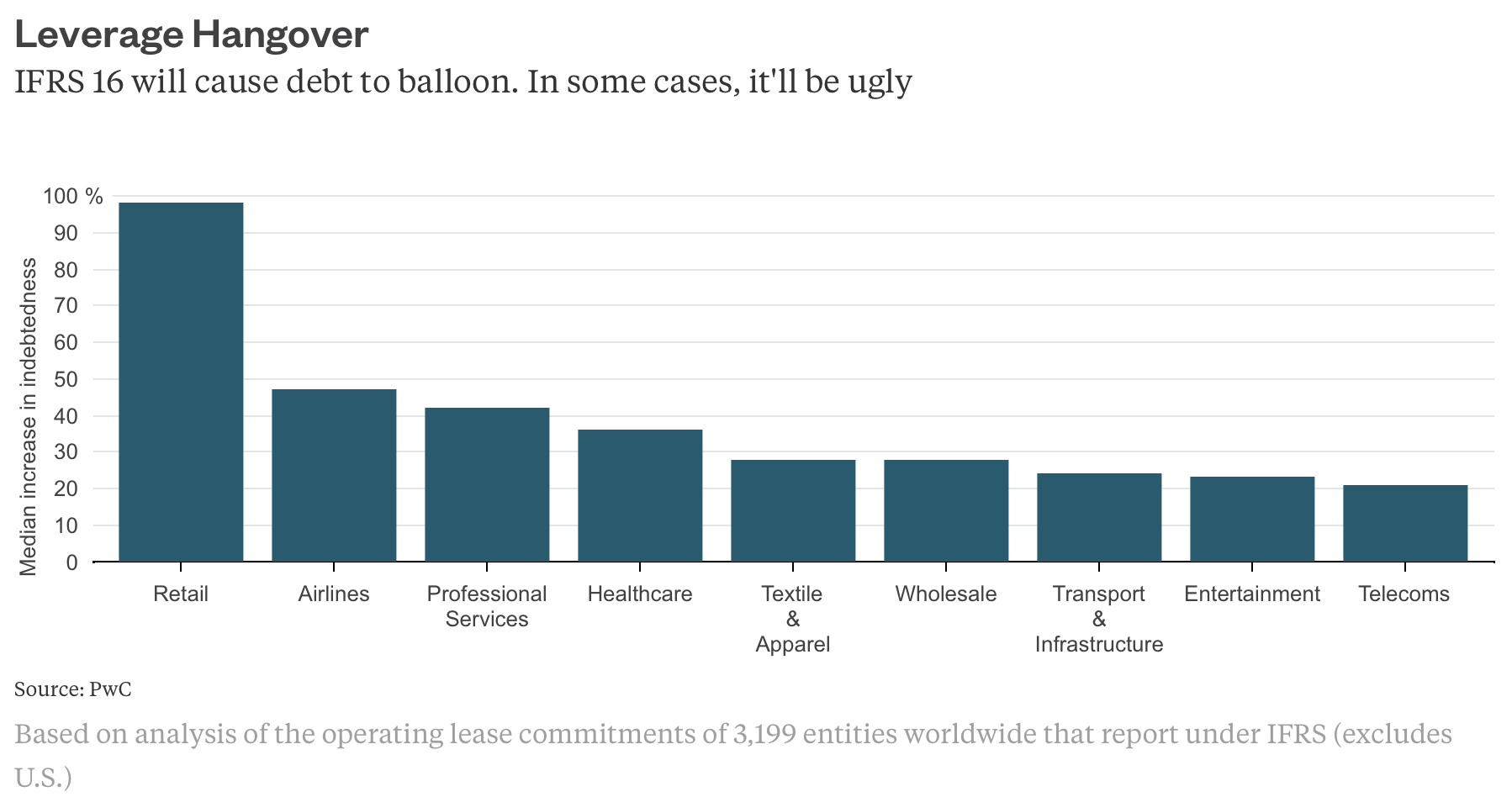 But while retailers are almost certainly heavy users of operating leases, it’s a relatively recent and not healthy development. 1

Historically, many retailers owned their own real estate because the business was risky. Keeping costs down by not paying rent enabled merchants to ride out bad times. As we explained in 2014, in a review of Eileen Appelbaum and Rosemary Batt’s book Private Equity at Work:

The problem with this approach is usually twofold. First the businesses that chose to own their own real estate did so for good reason. They were typically seasonal businesses, like retailers, or low margin businesses particularly vulnerable to the business cycle, like low-end restaurants. Owning their own property reduced their fixed costs, making them better able to ride out bad times.

To make this picture worse, the PE firms typically “sell” the real estate at an inflated price, which justifies saddling the operating business with high lease payments, making the financial risk to the company even higher. Of course, those potentially unsustainable rents make the real estate company look more valuable to prospective investors than it probably is.

As Eileen Appelbaum pointed out in an interview with our Andrew Dittmer later that year:

When a publicly traded or a family-owned company engages in a sale/lease back arrangement, the company actually gets the benefit from the sale. You can imagine situations in which this would be a good idea. You might want to make investments in your business, and maybe the cheapest form of financing would be to sell the properties, take the bundle of cash to make the investment, and then pay rent to lease back the properties. What makes this different is that you, the company, get the money.

So how will this accounting rule change affect private equity players? The industry has yet to weigh in, but the effects appear to be mixed. On the one hand, it will increase EBIDTAs, and since deals are priced at a multiple of EBITDA, on the surface, this looks like a potential bonanza. From the Bloomberg article:

The upshot: this is going to make companies appear far more leveraged. Debt will increase compared to equity. At the same time, earnings before interest, taxation, depreciation and amortization may increase because leases will be depreciated, not expensed. Retailers can typically expect an Ebitda uplift of more than 40 percent, PwC found.

The author nevertheless argued, “The impact on reported liabilities is likely to prove most significant though.”

You’d expect private-market EBITDA multiples for retailers with high operating lease charges to fall. Whether they decline enough to fully reflect the impact of the accounting change will be seen in due course.

As Eileen Appelbaum said via e-mail:

I think it’s a good idea to treat leases as debt since it makes the debt more visible – especially to lenders and prospective buyers. It also means it will be more difficult to borrow from banks for such a strategy, which could be a negative for PE. I doubt it will alterPE’s use of the OpCo-PropCo [operating company-property company] model, however, since the main purpose of that maneuver is to pay back the PE investors for their original equity investment – with a profit if possible and as early in the fund’s life as possible. An early distribution of the proceeds of the sale of the business’ property will raise the IRR of the fund, also a big plus for PE. If they get less on exiting the operating company because the debt is more visible, I don’t think they care much about that.

How about the impact on public companies? From the Bloomberg account:

At the very least, the rule change should give armchair investors, not to mention a company’s customers, employees and suppliers, a much better idea of how risky a business is compared to rivals….

Besides, companies aren’t always as forthcoming as you might hope. Some airlines make debt adjustments for aircraft leases but not for other off-balance sheet rental agreements such as airport buildings. Delta Air Lines Inc. reported $6.1 billion in adjusted net debt at the end of December, including $2 billion in aircraft rent liabilities. Yet the discounted value of all its operating leases is closer to $9 billion, Gadfly estimates.

It’s conceivable therefore that IFRS 16 will affect corporate decisions on whether to rent or purchase an asset. Consider sale and lease-back arrangements. These were once a popular way for companies to get their hands on some cash and a quick chance for executives to make themselves look like geniuses. All of a sudden, return on assets improved…

The accounting changes could also lead to more volatility in financial results, according to James Stamp, a partner at KPMG. Airlines typically take out aircraft leases in U.S. dollars. If the carrier’s domestic currency weakens against the dollar, its liabilities would suddenly increase and it would have to take a currency hit against earnings. [KPMG partner James] Stamp thinks demand for hedging will rise.

_____
1 WalMart’s high use of leases may be a function of having stores heavily in rural or outer suburban spots, where the price of real estate would be low compared to that of many others in that sector. So operating lease costs would represent a lower percentage of store revenues than for individual stores of other chains. In addition, WalMart is able to wrest large financial concessions from local communities for opening a new store there. Those likely amount to enough of a cost break so as to not make an operating lease much of a business risk.