Yves here. Even though some may try arguing that Hillary Clinton was discussing China’s view of North and South Korea in her Goldman speech, it is naive to think that it is actually different from ours, despite the regular histrionics. As an anonymous reader at DownWithTyranny pointed out:

Again, if you review our (and their) policies since ’50 and think about it for only a minute, you realize both we and the Chinese want a split Korea. And we want it for much the same reasons. The North provides an annoyance to the US which inspires fear and stupidity… AND billions spent on weapons to keep certain sectors rich and occupied.

Now that the south has emerged as an economic and manufacturing behemoth, the need to keep them separate is even more pronounced, for just the reasons enunciated. 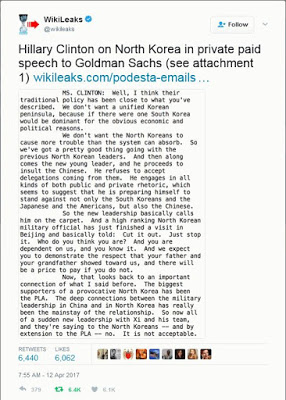 “We don’t want a unified Korean peninsula … We [also] don’t want the North Koreans to cause more trouble than the system can absorb.”

Our policy toward North Korea is not what most people think it is. We don’t want the North Koreans to go away. In fact, we like them doing what they’re doing; we just want less of it than they’ve been doing lately. If this sounds confusing, it’s because this policy is unlike what the public has been led to assume. Thanks to something uncovered by WikiLeaks, the American public has a chance to be unconfused about what’s really going on with respect to our policies in Korea.

This piece isn’t intended to criticize that policy; it may be an excellent one. I’m just want to help us understand it better.

Our source for the U.S. government’s actual Korean policy — going back decades really — is former Secretary of State Hillary Clinton. She resigned that position in February 2013, and on June 4, 2013 she gave a speech at Goldman Sachs with Lloyd Blankfein present (perhaps on stage with her) in which she discussed in what sounds like a very frank manner, among many other things, the U.S. policy toward the two Korea and the relationship of that policy to China.

That speech and two others were sent by Tony Carrk of the Clinton campaign to a number of others in the campaign, including John Podesta. WikiLeaks subsequently released that email as part of its release of other Podesta emails (source email with attachments here). In that speech, Clinton spoke confidentially and, I believe, honestly. What she said in that speech, I take her as meaning truthfully. There’s certainly no reason for her to lie to her peers, and in some cases her betters, at Goldman Sachs. The entire speech reads like elites talking with elites in a space reserved just for them.

I’m not trying to impugn Clinton or WikiLeaks by writing this — that’s not my intention at all. I just want to learn from what she has to say — from a position of knowledge — about the real U.S. policy toward North Korea. After all, if Goldman Sachs executives can be told this, it can’t be that big a secret. We should be able to know it as well.

What Clinton’s Speech Tells Us about U.S. Korea Policy

The WikiLeaks tweet is above. The entire speech, contained in the attachment to the email, is here. I’ve reprinted some of the relevant portions below, first quoting Ms. Clinton with some interspersed comments from me. Then, adding some thoughts about what this seems to imply about our approach to and relations with South Korea.

The Korea section of the Goldman Sachs speech starts with a discussion of China, and then Blankfein pivots to Korea. Blankfein’s whole question that leads to the Clinton quote tweeted by WikiLeaks above (my emphasis throughout):

MR. BLANKFEIN: The Japanese — I was more surprised that it wasn’t like that when you think of — all these different things. It’s such a part of who they are, their response to Japan. If you bump into the Filipino fishing boats, then I think you really — while we’re in the neighborhood [i.e., discussing Asia], the Chinese is going to help us or help themselves — what is helping themselves? North Korea? On the one hand they [the Chinese] wouldn’t want — they don’t want to unify Korea, but they can’t really like a nutty nuclear power on their border. What is their interests and what are they going to help us do?

Clinton’s whole answer is reprinted in the WikiLeaks tweet attachment (click through to the tweet and expand the embedded image to read it all). The relevant portions, for my purposes, are printed below. From the rest of her remarks, the context of Blankfein’s question and Clinton’s answer is the threat posed by a North Korean ICBM, not unlike the situation our government faces today.

MS. CLINTON: Well, I think [Chinese] traditional policy has been close to what you’ve described. We don’t want a unified Korean peninsula, because if there were one South Korea would be dominant for the obvious economic and political reasons.

We [also] don’t want the North Koreans to cause more trouble than the system can absorb. So we’ve got a pretty good thing going with the previous North Korean leaders [Kim Il-sung and Kim Jung-il]. And then along comes the new young leader [Kim Jung-un], and he proceeds to insult the Chinese. He refuses to accept delegations coming from them. He engages in all kinds of both public and private rhetoric, which seems to suggest that he is preparing himself to stand against not only the South Koreans and the Japanese and the Americans, but also the Chinese.

It appears that China has the same interest in keeping this situation as-is that we do. That is, they want South Korea (and us) to have a Korean adversary, but they don’t want the adversary acting out of acceptable bounds — coloring outside the lines laid down by the Chinese (and the U.S.), as it were. Clinton:

So the new [Chinese] leadership basically calls him [Kim Jung-un] on the carpet. And a high ranking North Korean military official has just finished a visit in Beijing and basically told [him, as a message from the Chinese]: Cut it out. Just stop it. Who do you think you are? And you are dependent on us [the Chinese], and you know it. And we expect you to demonstrate the respect that your father and your grandfather [Kim Jung-il, Kim Il-sung] showed toward us, and there will be a price to pay if you do not.

Now, that looks back to an important connection of what I said before. The biggest supporters of a provocative North Korea has been the PLA [the Chinese People’s Liberation Army]. The deep connections between the military leadership in China and in North Korea has really been the mainstay of the relationship.So now all of a sudden new leadership with Xi and his team, and they’re saying to the North Koreans — and by extension to the PLA — no. It is not acceptable. We don’t need this [trouble] right now. We’ve got other things going on. So you’re going to have to pull back from your provocative actions, start talking to South Koreans again about the free trade zones, the business zones on the border, and get back to regular order and do it quickly.

Now, we don’t care if you occasionally shoot off a missile. That’s good. That upsets the Americans and causes them heartburn, but you can’t keep going down a path that is unpredictable. We don’t like that. That is not acceptable to us.

Clinton ends with a fourth point:

So they want to keep North Korea within their orbit. They want to keep it predictable in their view. They have made some rather significant statements recently that they would very much like to see the North Koreans pull back from their nuclear program. Because I and everybody else — and I know you had Leon Panetta here this morning. You know, we all have told the Chinese if they continue to develop this missile program and they get an ICBM that has the capacity to carry a small nuclear weapon on it, which is what they’re aiming to do, we cannot abide that. Because they could not only do damage to our treaty allies, namely Japan and South Korea, but they could actually reach Hawaii and the west coast theoretically, and we’re going to ring China with missile defense. We’re going to put more of our fleet in the area.

So China, come on. You either control them or we’re going to have to defend against them.

The four bullets above (three, and then one) give a very clear definition of longstanding U.S. policy toward the two Koreas. I think the only surprise in this, for us civilians, is that the U.S. doesn’t want the Korean peninsula unified. So two questions: Why not? And, do the South Koreans know this? I’ll offer brief answers below.

South Korea is one of the great emerging nations in East Asia, one of the “Asian tigers,” a manufacturing and economic powerhouse that’s lately been turning into a technological and innovative powerhouse as well.

For example, one of just many, from Forbes:

American business has long led the way in high tech density or the proportion of businesses that engage in activities such as Internet software and services, hardware and semiconductors. The US is fertile ground for tech start-ups with access to capital and a culture that celebrates risk taking. Other countries have made their mark on the world stage, competing to be prominent tech and innovation hubs. Israel has been lauded as a start-up nation with several hundred companies getting funded by venture capital each year. A number of these companies are now being acquired by the likes of Apple, Facebook and Google. Finland and Sweden have attracted notice by bringing us Angry Birds and Spotify among others. But a new start-up powerhouse is on the horizon – South Korea. […]

In other words, South Korea has leaped beyond being a country that keeps U.S. tech CEOs wealthy — it’s now taking steps that threaten that wealth itself. And not just in electronics; the biological research field — think cloning — is an area the South Koreans are trying to take a lead in as well.

It’s easy to understand Ms. Clinton’s — and the business-captured American government’s — interest in making sure that the U.S. CEO class isn’t further threatened by a potential doubling of the capacity of the South Korean government and economy. Let them (the Koreans) manufacture to their heart’s content, our policy seems to say; but to threaten our lead in billionaire-producing entrepreneurship … that’s a bridge too far.

Again, this is Clinton speaking, I’m absolutely certain, on behalf of U.S. government policy makers and the elites they serve: We don’t want a unified Korean peninsula, because if there were one, an already-strong South Korea would be dominant for obvious economic reasons.

As to whether the South Koreans know that this is our policy, I’d have to say, very likely yes. After all, if Clinton is saying this to meetings of Goldman Sachs executives, it can’t be that big a secret. It’s just that the South Korea leadership knows better than the North Korean leader how to handle it.