By Wolfgang Keller, Director of the McGuire Center for International Economics and Professor at the University of Colorado-Boulder and Will Olney, Associate Professor of Economics, Williams College. Originally published at VoEU

Growing income inequality has been a hallmark of developed economies over the past few decades. Despite a large empirical literature exploring the determinants of this trend, to date few studies have explored the role of globalization. Using US data on executive compensation, this column argues that while firm size, technology, and poor governance have all contributed to the growth in top incomes, globalization is just as important in explaining the trend.

Growing inequality has been one of the most salient features of the US economy over the last 40 years. As depicted in Figure 1, nearly all of this growth in inequality is driven by the rapid increase in top incomes (Alvaredo et al. 2017, Piketty and Saez 2003). The share of income accruing to the top 1% of earners has risen from less than 10% in the 1970s to over 20% today. Despite important policy implications, the causes of this growth in top incomes remains an open and controversial question. 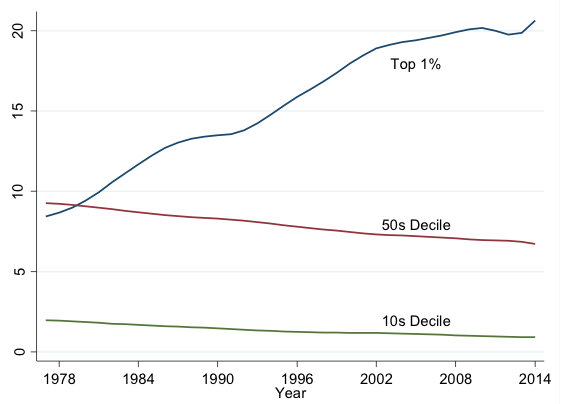 A variety of explanations for this rapid growth in top incomes have been proposed, including growing firm size (Gabaix and Landier 2008), new technology (Kaplan and Rauh 2013), the market for superstars (Rosen 1981), poor governance (Bertrand and Mullainathan 2001), and changes in top tax rates (Piketty et al. 2014). Despite the common perception that globalization has played a role in the growth of top incomes,1 there has been relatively little work studying this channel. Our recent paper aims to fill this gap (Keller and Olney 2017). Our findings complement recent research showing that rising import competition has adversely affected the low end of the income distribution (Autor et al. 2013, Pierce and Schott 2016). Given that the vast majority of income inequality is driven by growth in top incomes, focusing on exports and executive compensation seems especially relevant and important.

Broadly, there are two channels through which globalization could affect top incomes. First, market returns to executive talent may be rising with globalization. Globalization increases the market size of firms and may increase the difficulty of the executive’s job. Thus, as the importance of top superstar executive’s increase in the global economy, their compensation rises accordingly.

Second, globalization could affect top incomes for reasons unrelated to market returns to talent. The firm may be in an industry that happens to be expanding globally for reasons outside of the executive’s control, but the executive is nonetheless reaping the rewards of this fortunate turn of events. Alternatively, perhaps the sheer size and complexity of exporting firms enhance the opportunity for executives to disproportionately benefit in poor governance and rent-capture environments.

Using a large dataset with detailed compensation information for US executives over the years 1993-2013, our results confirm that firm size, technology, and poor governance all have contributed to the growth in top incomes. Importantly we find that, qualitatively, exports are just as important at explaining the growth in executive compensation as the other more common explanations.

Additional results disentangle the luck and rent-capture channels. As illustrated in Figure 2, executive bonuses are more sensitive to export shocks than total compensation. Since bonuses are by nature relatively discretionary and conducive to rent-capture, this result not only reinforces the role of non-market channels but also suggests that rent-capture is important. Furthermore, we examine whether the impact of exogenous export shocks on executive bonuses is stronger in settings that are prone to rent-capture activities. Figure 2 shows that export shocks lead to an even larger increase in executive bonuses in poor governance environments characterised by insider board relationships. Thus, there is evidence that it hasn’t only been the ‘invisible hand’ of the market that has contributed to the increase in top US incomes. 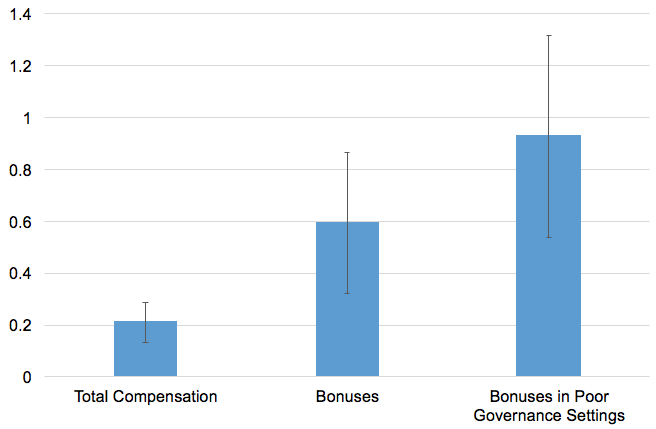 Overall, our findings indicate that globalization has played a more central role in the rapid growth of executive compensation and US inequality than previously thought, and that rent-capture is an important part of this story. However, these findings should not be interpreted as a rationale for protectionist policies, since globalization has also generated large increases in standards of living. The key question for policymakers is to devise ways to address the distributional implications of globalization, such as those identified in this column, without compromising aggregate welfare gains.