Scientists Discover a 2D Magnet R&D Magazine. MoiAussie: “A real first – could have many applications.”

Please applaud our Richard Smith, who writes: “Many hands involved in its downfall; two of them were mine, though, so slightly chuffed. Of course the money (and we are talking billions) will just be flitting off to other shadows.”

Visit Tsukiji, a ‘Great Wonder of the World,’ While You Still Can Bloomberg

UK Election. The results have created what Lambert would call an overly dynamic situation. As an aside, note that Labor did worse in the seat results than YouGov predicted, but better in popular vote, getting 40.1% versus the Tory 42.3%. But in general, the pollsters have as much egg on their faces as the Tories do.

Also, for UK political junkies or foreigners who want to get down the curve, the commentary on our post as results were coming in was very informative, so you might give that a look too.

Please stay while we savour your humiliation, Britain tells May Daily Mash

Theresa May: “Hold my Pimms.”

The Times points out in its daily e-mail:

A host of big beasts have lost their seats, including Alex Salmond, Nick Clegg and Angus Robertson. But the home secretary Amber Rudd has held on despite Labour defeating one Tory minister after another

Corbyn’s ‘gobsmacking’ result confounds critics Financial Times. After nearly 40 years of neoliberal policies, pundits have managed to believe that ordinary citizens are content to get the short end of the stick. The backlash has finally taken place.

Election 2017: What is happening? Possibly one of the biggest upsets in UK political history Independent. Subhead from earlier in the AM: “With Brexit negotiations less than two weeks away, if the exit poll is correct then there will be complete chaos.”

It Looks Like No One Has Won The UK General Election. WTF Happens Now? BuzzFeed (Richard Smith)

Dear God, Johnson is a horror and Davis is stupid. Hammond by default is the best of those choices, but was opposed to Brexit. But given that the election appeared to show that voters at most want a “soft Brexit,” plus someone who is known to like the EU would have better odds of getting the negotiations on a decent interpersonal footing, he would seem to be the best man the Tories have for the job. Whether they can get their minds around that is another matter entirely.

British democracy in one photo pic.twitter.com/S9HIJ1Ynbz

No One Has Ever Made a Corruption Machine Like This One Bloomberg. On the Brazil corruption scandal. I dunno. The F-35 boondoggle is pretty rich. But it’s all done in the open, hence no corruption, right?

Corrupt, dangerous and brutal to its poor – but is Marseille the future of France? Guardian (resilc)

Qatar in talks with Turkey and Iran to provide food, water: official Reuters. Resilc: “Comey is BS. This is the news.”

Saudis Have a Lot to Lose in Fight With Qatar, Even If They Win Bloomberg

Taliban territory: Life in Afghanistan under the militants BBC. Resilc: “Do you like the humvee they have? Wonder where they got that?”

Facebook wants to spy on people through their smartphone camera and analyse the emotions on their face The Sun (Chuck L). Another reason not to have smartphone.

What We Learned, And Didn’t, From Comey Testimony Bloomberg (furzy)

James Comey and the Predator in Chief New York Times

Comey, Trump Accuse Each Other of Lying in Wake of Hearing Bloomberg

Comey’s statement weakens already weak obstruction of justice case Asia Times. Important. From of all people staunch Trump opponent Alan Dershowitz. Has any mainstream US media outlet in the US picked up his take?

Former FBI agent: ‘I literally wanted to rinse myself off’ after Comey statement The Hill. Lambert: “But read all the way to the end!!!!”

Are the Feds Treating the White House Like a Mob House? Daily Beast

Border wall might be covered in solar panels. Why not build it out of coal? TreeHugger (Chuck L)

Trump and the Democrats stumble into a ‘Wilderness of Mirrors’ Fabius Maximus. Important.

…the Senate is unlikely to take up some of the more controversial provisions in House bill, according to a GOP Senate aide, such as the 10% leverage ratio for regulatory relief, reduced powers of the consumer bureau, and repealing the Orderly Liquidation Authority in Dodd-Frank for the government to unwind a failing financial firm…

Mr. Hensarling said he is looking for ways to push pieces of the plan through the Senate without Democratic support by attaching some measure to the annual budget bill, which passes on a majority vote. Some of those provisions include the Orderly Liquidation Authority measure, reducing the CFPB’s powers and eliminating the Office of Financial Research, created to study financial risks.

I went to the Daily Mail to see what they made of the UK election results. This was their lead story for US readers: ‘I want to burn the White House down’: NSA leaker Reality Winner, 25, is DENIED bail as prosecutors claim she may have stolen more top secret information, was fascinated with Islamic terrorism and planned to play the ‘pretty, white girl’ card in court

U.S. Pays Farmers Billions To Save The Soil. But It’s Blowing Away NPR (Chuck L)

State workers will have a new personnel director in Jerry Brown’s last year Sacramento Bee. The real news is this: “State Human Resources Director Richard Gillihan is leaving his post overseeing the state’s workforce. He’s joining the California Public Employees’ Retirement System as its new chief financial officer.” Even though he did work for the Department of Finance, he’s a weak choice for this role. He’s not a CPA, which is what you would normally expect to see in a private sector CFO. And he’s said little in board discussions.

What Is Ailing Retail? Barry Ritholtz

Why Amazon should keep prescription drugs off its voluminous shelves The Conversation (J-LS). Dear God, I had no idea this was under consideration. Gah.

Boxed in: life inside the ‘coffin cubicles’ of Hong Kong – in pictures Guardian (resilc). A must see.

Antidote du jour. Crittermom:”Hummingbirds do take baths, but they’re so quick about it this is the first time I’ve been able to capture it. I suppose it could be called the epitome of a ‘bird bath'”. 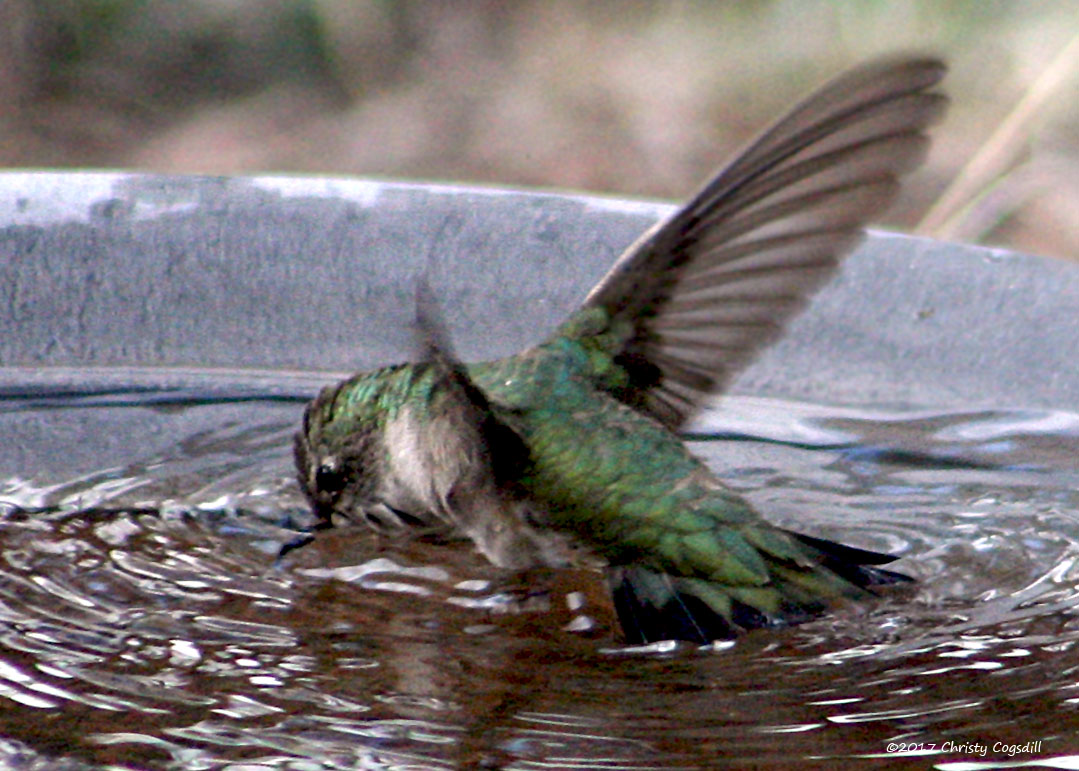 And a bonus antidote (Richard Smith):