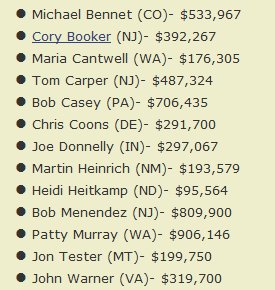 Democrats (!) who voted with Big Pharma and against prescription drug importation, along with “the amount they have taken from drug companies since being elected to federal office” (details here). How much longer should any of these “enemies of the people” be in office? Or do they get at pass because they’re our “enemies of the people”?

The answer to the headline question is — across all industries and monopoly protection schemes regulated and allowed by Congress, easily more than $100 billion per year. That’s the dollar price of keeping “fake progressives” like Cory Booker and Patty Murray well-fed and happy in Washington, D.C. Over $100 billion. Per year.

Can Progressives Afford to Protect and Defend “Fake Progressive” Senators?

Let’s look at the cost to the American people of supporting “fake progressives” like those listed above by looking at just one industry, one monopoly protection scheme — prescription drugs prices.

Readers of DWT recently learned that:

Cory Booker helped the Republican predators kill his drug reimportation bill, a bill killed by Cory and a dozen other Democrats putting their donors before their constituents. Matt Taibbi has been on fire lately. His newest Rolling Stone essay, Republicans and Democrats Continue to Block Drug Reimportation— After Publicly Endorsing It, makes the not so subtle point that “the one true bipartisan instinct in Washington is caving to rich industries.”

As Matt Taibbi points out in the referenced article (all emphasis mine):

In 2015, for instance, the 20 largest drug companies made a collective $124 billion in profits.

All the industry needs to protect those sums is the continued cooperation of Congress.

So naturally it spends money– not a lot by industry standards, but a ton by the standards of the ludicrously cheap dates we call federal politicians— to make sure they always have just enough dependable people in office to block change.

Most of that $124 billion — profit, mind you; not revenue — came out of our pockets. Taibbi again:

The entire pharmaceutical industry is floated by a protectionist racket. Drugs that are in fact very cheap to make are kept artificially expensive– we have drugs that cost $1,000 a pill here in America that sell for $4 in India, for instance.

This is the price you pay … per year … to keep Patty Murray and her kind in office. Do you feel you’re getting a fair return for your own investment in her career?

The ROI on Corruption — Are Politicians Like Patty Murray “Ridiculously Cheap Dates”?

Let’s look at what Big Pharma gets from us in return for our keeping Patty Murray and her like in office. Taibbi’s characterization of the people named in the graphic at the top was “the ludicrously cheap dates we call federal politicians.”

Cheap dates indeed. The top dollar figure in the graphic above is “fake progressive” Patty Murray’s $900,000. The aggregate number in the graphic is about $5-6 million. That’s not even a per-year bribe to these people, but a “for the life of their time in federal office” bribe.

Consider: The return on industry lobbying — let’s round up and call it $10 million across several Senate terms — is $124 billion in protected profit per year. Looking at the drug price mark-up in the Taibbi article — from $4 to $1000 — gives a profit increase of 250 times the original (and still profitable) $4 price in India. Let’s lower that increase, since I’m sure Taibbi picked an extreme example. Let’s say that, on average, the protected U.S. profit is “just” a 100-times increase over what’s profitable overseas.

If this is true, it’s very safe to say that of that $124 billion in profit, at least $100 billion is bought by lobbying Congress for price protection.

Very cheap dates indeed. Corrupt Senators like Patty Murray need a better agent, or at least a union. After all, real agents get 10 percent. Acting as their own agents, politicians like Murray can’t manage to squeeze one percent out of one of the most profitable industries in the world.

And her failure to extract more feathers for her nest is worse when you consider that Congress is the sole source for price protection at the national level. Corrupt Senate votes like Murray’s can’t be acquired anywhere else in the country.

Wide majorities of voters want public officials to reduce American medicine prices, which are the highest in the worldand have become a key driver of skyrocketing healthcare costs. And yet as politicians including Donald Trump and Bernie Sanders have continued to call for a crackdown, corporate power players have successfully blocked even minimal reforms — with the help, at times, of industry-connected Democrats, whose party portrays itself as a consumer-defending critic of the healthcare industry.

As Congress holds more hearings on the issue, the fight over drug prices has moved to [state] legislatures — and an intense debate in Connecticut most starkly illuminates the battle lines. There, the House, the governorship and all constitutional offices are controlled by a Democratic Party that has long criticized the pharmaceutical industry for its pricing practices. Connecticut, though, also has America’s highest number of insurance jobs per capita, and a cadre of powerful public officials with financial and familial ties to the insurance industry — a situation that adds to the influence the industry already wields through its campaign cash and lobbyists.

Fresh off a presidential campaign that saw both parties’ candidates promising to make prescription medicine more affordable, Connecticut lawmakers in January introduced legislation to bring more transparency to drug prices. The bill, which mirrors similar initiatives in other states, also aims to stop insurance companies from effectively forcing their policyholders to pay more for medicine than it actually costs — a lucrative scheme that critics say allows insurers and their affiliated pharmaceutical benefit managers to pocket the difference.

Despite the pharmaceutical industry’s opposition, the Connecticut legislation initially seemed headed for approval: It was sponsored by the Senate Democratic and Republican leaders and was backed by high-profile officials like the Democratic state comptroller.

Who could make this go wrong? Industry-connected Democrats:

But a few weeks ago, bill proponents say, Connecticut’s insurance commissioner Katharine Wade pressed for changes that would weaken the penalties in the legislation and leave enforcement of its provisions to the healthcare industry itself.

Democratic Gov. Dannel Malloy, who appointed Wade, came to her defense. “We must take much greater care in considering the impact our actions have on Connecticut insurers,” he said. House Majority Leader Matt Ritter, a Democrat, suggestedlawmakers were not sufficiently listening to insurers — and then sponsored an amendment to implement Wade’s proposals. He also backed an amendment to strip out a separate provision in the bill designed to compel insurers to more explicitly disclose all their fees to policyholders.

It goes on from there. Please read Sirota’s good work for the rest. Among the revelations, you’ll find a web of interconnected, industry-connected relationship among the Democrats that can only be described as corrupt, considering the outcomes.

For example, “As Wade’s department regulates Cigna and its PBM, her husband is an in-house Cigna attorney and her father-in-law, James Wade, is a partner in a law firm working for the PBM, OptumRX, named as a defendant in the Connecticut price-gouging suit. That same law firm lobbies for Cigna and for the health insurance industry’s trade association in the state.”

Also, that Malloy “is the chairman of the Democratic Governors Association, which raised more than $6 million from donors in the health insurance and drug industries during the 2016 election cycle,” and much much more.

Malloy is good on many issues (read about him here), but he works for people who want to rob you blind when you most need help — when you’re sick and need medicine.

That’s a trick question. You can have Democrats or Republicans, but you can’t get nice things like reasonably priced prescription drugs from either of them.

Until the Democratic Party is forced to kick corrupt politicians like “fake progressive” Patty Murray and industry lackey Dannel Malloy (and dozens and dozens more) to the curb, you can’t have most nice things — Medicare for All, reasonable prescription drug prices, student debt relief, fair internet and telecom prices, all the rest — with or without the Democrats.

Did someone say “brand new Congress”? The next chance is 2018.

In the meantime, it’s up to you to decide if control of the Senate is important enough to keep the Senators listed above well-fed and free to swan about in D.C. like they own the place. They may indeed own the place, but they’re buying it with your money — and in the case of sky-high drug prices, with many of your lives as well.

(“Oh, it’s you, Senator. Let me take you to your table — the best, of course, as you requested. Allow me to take your coat. Three people died in your state last week to finance how I’m greeting you now. Would you like to see the wine list, or should I decant your usual?”)

Of the names listed at the top, only five are not up for re-election in 2018 — Bennet, Booker, Coons, Murray (unfortunately), and Warner. All the rest, including “fake progressive” Maria Cantwell, are vulnerable. If you live in one of the states they represent, their future is in your hands.