As if all of the extra-special education (the opportunity to get foreign language training early, as well as a raft of advanced classes) weren’t enough, students at prep schools have another advantage: grade inflation. As this article from The Hechinger Report describes, average GPAs at private high schools have increased even as SATs have declined:

Here’s the latest, more profound way in which wealthier students have an advantage over lower-income ones: Those enrolled in private and suburban public high schools are being awarded higher grades — critical in the competition for college admission — than their urban public school counterparts with no less talent or potential, new research shows.

It’s not that those students have been getting smarter. Even as their grades were rising, their scores on the SAT college-entrance exam went down, not up. Nor are those in some schools more intelligent than those in others…. 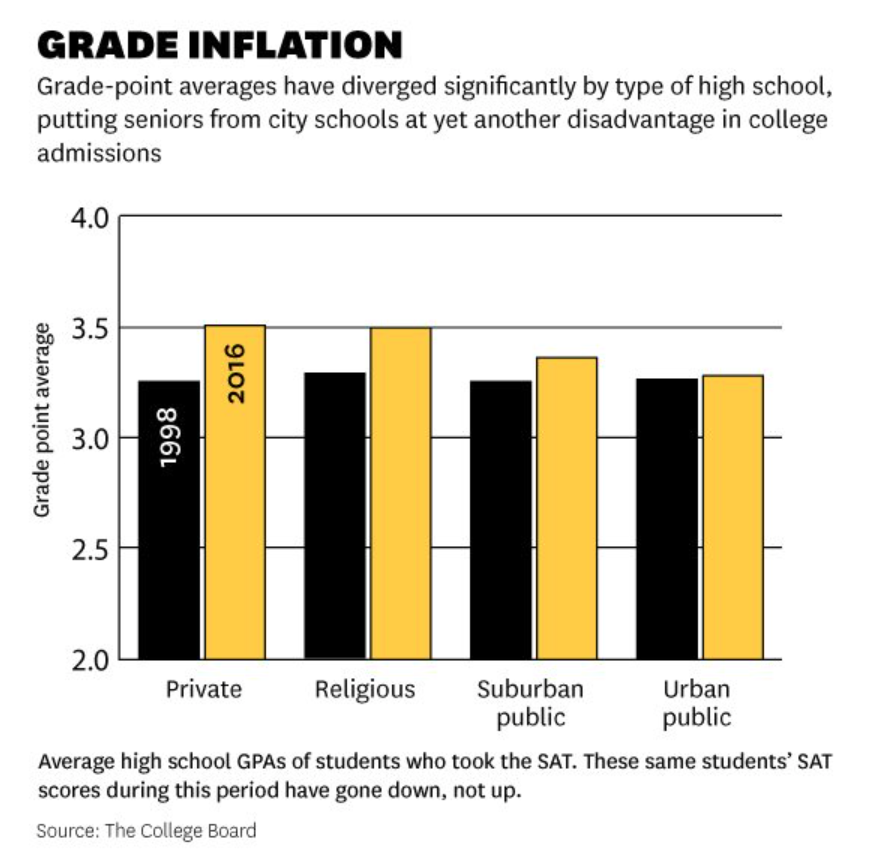 The grade-point average of students at private high schools who took the SAT climbed between 1998 and 2016 from 3.25 to 3.51, or almost 8 percent, the College Board found in research to be published early next year.

“If there were a uniform upward drift, then we would have one problem,” said Michael Hurwitz, senior director at the College Board, who led the research. “But this drift causes another problem: The variation does seem aligned with wealth in a very troubling way.”

Here are some additionally troubling bits. Certainly for the top elite colleges, like the Ivy League plus MIT, Stanford and other highly-regarded schools, this can’t be news. The top private schools (prep schools like St. Pauls, Groton, Andover, Exeter, the New York City elite schools like Horace Mann, Dalton and Brearley) and the public schools that are close to if not on their level (Beverly Hills High, Bronx High School of Science) are very keenly observed by the top colleges. At least in my day, the view was that bases on their academic standards, Harvard could have admitted its entire class from private schools, particularly the top ones. Harvard admitted 35% of its class from private schools, which if anything is down from the level in my day.2 However, 16% were “legacy” which means their parents went to Harvard College, which seems higher than in my cohort.

In other words, the top colleges already have had long-standing de facto quotas on how many kids they take from elite private schools. So even if the kids at private schools on average are less smart (as reflected in the falling SAT scores), even if we assume that also happened at the top prep schools, that was unlikely to have changed the fact that even allowing for that, they still had an oversupply of students who would satisfy the admission criteria. What would have changes is what traders call the “bid to cover ratio”.

Where the grade inflation may really hurt urban public school kids is in the next tier of schools in terms of cachet (which BTW does not mean the caliber of education is necessarily lower that that of the “elite” colleges) and when they are competing with kids from suburban high schools and private schools where there are no quotas. So the negative impact on smart urban school students is real, but it operates in a more complex manner.

The reason I mentioned the tight relationship between the top prep schools and the top college is that it seems unlikely that some of the colleges didn’t notice the grade inflation. So why didn’t they clear their throats and say “You aren’t doing us or your students any favors”?

One possible reason is that the colleges understood full well that private schools were responding to customer, as in parental, pressure, and didn’t think it would be productive to push back. Again from the story:

Private schools in particular, Weissbourd said, “to be attractive to parents, need to be able to tout how many of their students went to selective colleges. So they’re incentivized to give better grades.”

The same concern about college admission drives parents of students in suburban schools to pressure principals and teachers, he said. “It becomes very high maintenance for schools to deal with aggressive parents. So that can also push grades up.”

Then the cycle repeats.

When her mother calls the Pittsburgh high school where Olivia Hall is entering her sophomore year, the 15-year-old says, “They put her on hold and tell her the principal and guidance counselor are busy.” Meanwhile, experts say, parents of suburban and private school students are successfully nagging their schools to raise their children’s grades.

“This is one of those things that works like a contagion,” Weissbourd said. “If you’re an independent school or a suburban school and you’re giving Bs and the school in the next community is giving A-minuses, you start to feel like those kids are going to get a leg up. So you start giving out A-minuses.”

Public schools in urban areas seldom seem to feel the same pressure. When her mother calls the public high school in Pittsburgh where Olivia Hall is entering her sophomore year, the 15-year-old said, “They put her on hold and tell her the principal and guidance counselor are busy.”

And let us not forget that even for the so-so students at private and the public schools in well-heeled suburbs, another leg up is in having guidance counselors who know better where the not-stellar student might get in. At prep schools, they also act as gatekeepers with the exceptional students, as in forcing them to tightly limit their applications to top colleges so as to give more students a chance to be placed well.

To me, the real story here is that SATs at both private schools and suburban high schools, which are supposed to be in the business of providing “better” education, are in fact doing worse, as reflected in the sliding SAT scores. Why aren’t these pushy parents making noise about that?

And that’s before you get to the fact that over a long-term period, educational achievement in American has been on a decay path, masked by a rejiggering of SAT scores in the 1990s. From a the New York Times, S.A.T. Increases the Average Score, by Fiat:

The S.A.T. score of the average American high school student will soon be going up 100 points. However, that doesn’t mean that anyone is getting smarter.

Beginning in April 1995, the College Board, based in Manhattan, will be recalibrating its scoring of the Scholastic Assessment Test. The bottom score will still be 200 and the top 800, but it will be easier for everyone to get higher scores.

When the current scoring system was established in 1941, 500 was the average score for each test, the math and verbal. Those scores have been declining for nearly four decades. The average verbal score today is 424; the average math score, 478.

So the College Board officials have decided to “recenter” the scale, changing it so the average student will once again get scores of 500 on the verbal and math tests.

Again in my day, the SATs did a finer job of sorting the high tail end. Pretty much everyone I knew in college had gotten SATs somewhere in the 700s; the very few who had gotten 800s were understood to be exceptional. But now with the dumbing down of everything, it’s apparently more important to cover up the long-term slippage by creating “new normals” even on the educational front.
_____
1 Mind you, this isn’t the only reason, but the preoccupation with elite colleges, which has increasingly become vehicles for preserving class differences, as opposed to giving their children a better education, is telling. I do know one parent who though a big advantage of going to a private school was that the students became more socially skilled, and she regarded that as important in and of itself (ie. if her son wasn’t willing to apply himself hard enough to stand out academically, he’d at least have the polish to be able to land in a reasonable job. So she was clear that the kids at this school were acquiring status markers in the form of impeccable manners and good conversational skills).

2 Private schools had suffered a large decline in enrollment from the 1960s through the 1970s:

Private-school enrollment fell by 31 percent between 1964 and 1979, according to a new Census Bureau report that may figure prominently in the continuing debate on tuition tax credits for parents of children who attend private schools.