Yves here. This article, on how modern society, or more accurately neoliberalism, requires people to be ever and always hustling, struck a chord. I’ve always found networking, the even crasser version of constantly “making a pitch” and other forms of cultivating contacts with other people for mercenary ends to be distasteful. They degrade relationships and train people to value others as potential meal tickets, which encourages sociopathic behavior. Plus on a mundane level, networking events often turn out to be rooms full of people selling with nary a buyer to be found.

The post below describes that “the pitch” has become ever more degrading as more people are put in the position of aggressively hawking more and more elements of their lives on sale…their talents, their time, their apartments, their under-used upscale goods, and even their bodies (and not even in the context of conventional prostitution).

Back in the stone ages of my youth, even though people in business did make a point to get out and about, it was most commonly described as “participating in the community” or “getting known in the community.” That meant that the tacit assumption was that you weren’t competing to get ahead of other people or worse, a parasite trying to take advantage of others, but were a person of substance. If other members of the community understood who you were and what you were good at, they’d think of calling you. The tacit assumption was that there was enough business to go around, and you needed to keep enough of a profile to make sure you didn’t get overlooked. You’ll notice that this article stresses the importance of place, and how that has been lot

Mind you, it wasn’t hard to see where we’d wind up. Lindsay Anderson anticipated it in his 1973 movie, O Lucky Man! The movie has the interesting device of treating the band as a Greek chorus and cutting to it at various points in the film. The point is that too many of us are operating in the survivalist manner of commission salesmen (if you’ve ever been one, you know what it feels like).

By Paul Walsh, a teacher, writer, and precarious worker. He writes on grassroots politics, social movements, and neoliberalism. Find him on twitter: @josipa74. Originally published at openDemocracy

Welcome to the new economy, where everyone is free to submit to another round of degrading competition. 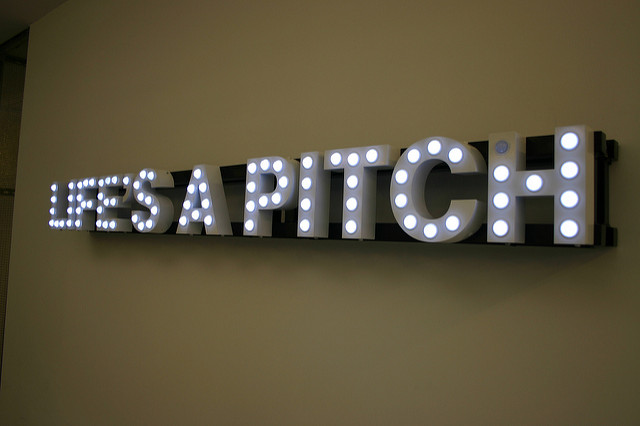 Today’s economy has reduced life to a never-ending pitch. We parade before bosses and clients for work. We position ourselves on social media for friendship, love, sex—or just attention. We work longer hours for less pay, and due to technology and globalization, fewer jobs mean workers can demand less and bosses more. As the hotelier Conrad Hilton says to Don Draper in the TV series Mad Men, “When I say I want the moon, I expect the moon.”

Yet the colonization of life by the ‘pitch’ is a symptom: unionised jobs with social benefits have disappeared, and without the fixed ropes enjoyed by a previous generation the marketing of ourselves and our souls has become required rather than chosen. “The painful truth is that, at work, we’re on trial all the time” as Roger Mavity and Stephen Bayley write.

Now, pitching has expanded way beyond the world of work and into social media, dating apps, and reality television. Life is experienced through the prism, or prison, of pitching. How did this happen, and what can be done?

The word pitch commonly means ‘to throw,’ as in pitching an idea or a product. Sales pitches are crafted to be persuasive and logically impenetrable—designed to bring the customer to the point where they care enough to buy, or just want the stream-of-consciousness selling to end. In Glengarry Glen Ross, Blake—the character played by Alec Baldwin—embodies mercenary salesmanship at its purest: “only one thing counts in this life,” he says, “get them to sign on the line which is dotted…A-B-C. A-Always, B-Be, C-Closing. Always be closing.” And always be pitching.

We have to be connected, to be visible, ‘gramming’ or ‘tinding’—two forms of contemporary ‘pitch-work’ performed in the electronic sweatshop. Part of this pitch-work involves forming networks, because someone has to be there to ‘catch’ your ideas—to catch you. Networks become our new safety nets—the stronger the network, the safer you are. Time is taken up making and cultivating links, turning weak links into strong links.

“We pitch all the time, because when it’s increasingly less about a piece of paper from a university, the way YOU appeal to others becomes more important…even in private life,” says Christoph Sollich, a Berlin-based pitch doctor. “The tool to stand out is how you pitch yourself, like on Tinder.”

We even have ‘pitch TV.’ Anna Richardson, the presenter of UK’s Naked Attraction, calls the show ‘Tinder television.’ Contestants choose a dating partner based on their naked bodies alone, standing inside semi-transparent Day-Glo boxes and slowly revealed from the bottom up—first the legs and the groin, then the torso, and finally the head.

The show claims to “demystify the rules of sexual attraction for the Tinder generation” by giving young people a true picture of each other’s bodies—truer than the photo-shopped versions available on social media. Yet this naked nightmare simply glorifies choice by body-parts—‘You’ve got six vaginas staring you in the face and you say you like feet’—ensuring that the show explodes on social media and harvests even more advertising revenue.

An alien watching from another planet might think that this show—and other naked reality televisions shows like Love Island and Stripped—show a people comfortable with their bodies and desires, and suggests a society at ease with itself, with few obstacles to freedom and self-expression; a heroic society in which the best can pitch their virtues to be admired and emulated.

But all this shows is the ‘pornography of the pitch’—the fact there’s no longer any distance between our desires and those who might fulfill them. You can pitch your apartment on Airbnb or your body on Naked Attraction, and if Obamacare is scrapped you can join the other people who’ll be pitching to cover their healthcare costs.

This isn’t a gig economy, it’s a pitch economy, and the pitch is where the rivers of neo-liberalism meet and the crocodiles feed. Everyone is ‘free,’ yet only to submit to another round of degrading competition. There’s always a winner yet the prize is elusive. Pitch platforms are democratic but all they democratise is need. Pitching has become a secular prayer for meaning in a culture of generalized meaninglessness. Like a mycelium growing underfoot it destroys social belonging and drags us into a sinkhole of sameness and despair.

How does ‘life as a never-ending pitch’ work? A system cannot operate without a culture to give it shape, and pitch culture invokes compulsory non-stop positivity, the blue-sky thinking of the Facebook ‘Like’ button. Drawing on positive psychology and the cod-philosophy of fast capitalist literature found at airport bookshops, systemic inequality is propped up by a sea of untested beliefs and fortune-cookie sound-bites that distil the ‘changing times’ into something we can understand, delivered in the deracinated vernacular of the pitch.

Researchers at Stanford University analysed this vernacular by looking at 26,000 Kickstarter pitches. The successful ones generated emotional responses; they were tentative and framed the pitch collectively by using ‘we.’ The unsuccessful ones generated affective responses; they were more certain and were framed using ‘I.’ Sadness and anger also indicated failed pitches. The research team found that successful ones were “more emotive, thoughtful and colloquial,” yet this is a particular kind of thoughtfulness devoid of negativity and empathy. For Korean-German philosopher Byung-Chul Han, such a culture of non-stop positivity (and blocked negativity) turns us into “exhausted slaves” in a “burnout society.” Does this sound familiar?

What’s the answer to these problems? In a world dominated by the apostles of capitalism’s Good News—the hierarchy-hopping, soy-latte-sipping, sexually-voracious-yet-emotionally-hollow millennials or Meh!-lennials—the future is not just being cancelled but reduced to an elevator pitch.

Or is it? Perhaps millennials, living with colossal levels of debt and subject to the ‘churn and burn’ workplaces of the gig economy, form part of the solution.

“Millennials are numerically far bigger than our generation, the sons and daughters of baby boomers—and they’re going to have a massive impact on politics,” Dmytri Kleiner told me when I interviewed him in Berlin. Kleiner is the founder of the Telekommunisten Collective, a group that explores the political impact of communications technology. “Actually they’re already having an impact,” he continued, “just look at Corbyn and Sanders. Politics is opening up—there’s a Left and a Right again. Unfortunately the Right is Trump, and we can’t stop talking about him.”

Kleiner believes that the Left has “lost the skills of organizing. Our generation had no political representatives to vote for, we could only vote for Left or Right variants of neoliberalism, and so we invented a politics that reflected this: a politics of horizontalism.” His idea of Venture Communism moves beyond horizontal politics by turning the weapons of capital back onto the capitalists while fighting to preserve workers’ historic gains.

“First we need to find new ways of organising our economy, creating worker-controlled organisations and businesses that add value to the commons; and second, we need a vigorous counter-politics that holds the state to account in providing health, education and social services. That’s Venture Communism.”

Kleiner’s work centres on the digital world like the Telekommunisten, who came out of Berlin’s hacker community to create hosting services and tools that give users more control over their data. But what about the physical world? What about organising real bodies in real places in real time?

In her book Twitter and Tear Gas: The Power and Fragility of Networked Protest, Zeynep Tufekci emphasizes the crucial importance of capacity within social movements, and reminds us of the importance of place. Artists and free-thinkers fleeing the First World War had Zurich’s Cabaret Voltaire (perhaps including a young Lenin); the New Left in England had the Partisan Coffee House; the American Civil Rights Movement had a network of churches and homes for activists to stay in.

But where are the places of the precariat? Where can people go to share stories, empathise and organise? Outside of online there are few places to gather. Pitch culture drowns out solidarity; online organising builds more barriers than bridges; and by pitching our problems into corporate servers we’re merely providing the fuel for our own destruction. Our pitches lift capitalism higher and higher.

So here’s my pitch. Today’s workers need places to organise offline, so let’s combine the ideas of the hacker community with the needs of the precariat to establish them. For want of a better word I’ll call them ‘Precär-Spaces:’ Prekär is German for precarious, and Precär is my English-German compromise. Let’s put a Precär-Space in every town and city, spaces where precarious workers can gather together, share stories, build empathy and organise for better working conditions and better lives.

Pitch culture works on anonymity, while the platforms of the gig economy keep workers isolated and unaware of each other’s struggles. A Precär-Space would be a place, a project and a disruptive technology to bring new collective ideas to light, and to help people break free of naked exploitation. In the words of Cabaret Voltaire’s Hugo Ball, we demand a space not only for those who enjoy their independence, but for those who wish to proclaim it.