Patient readers, Yves apologizes for being short an original post. She’s a bit under the weather. –Lambert

Dung Beetles Navigate Via the Milky Way, First Known in Animal Kingdom National Geographic. A bit stale, but since we haven’t run it before…

Wells Fargo chairman, two directors to step down amid continuing fallout from sham accounts scandal LA Times. They scuttle away, sacks of loot over their shoulders….

Can an investment pro persuade state workers to let him manage their pensions? Sacramento Bee. Mike Flaherman gets good press for his CalPERS board seat bid, but sadly no promo for the other reform candidate, Margaret Brown. So Californians, please talk both of them up!

Jeff Bezos Should Put His Billions Into Libraries WIRED

Argentina warns US against military move on Venezuela AFP

In Egypt, A Rising Sea — And Growing Worries About Climate Change’s Effects NPR

The Massacre That Ended the Arab Spring The Atlantic (Re Silc).

The smooth and orderly route to a new customs arrangement: A deal to benefit businesses on both sides of the Channel is vital David Davis, City AM. “The government will publish a series of papers on the new deep and special partnership the UK wants to build with the EU.” Goodness! Will the papers have bullet points?

Macron’s Revolution Is Over Before It Started Foreign Policy

For the Trump Internet, the president’s ‘alt-left’ comments were an ‘epic’ takedown WaPo

Who was responsible for the violence in Charlottesville? Here’s what witnesses say LA Times

What is the ‘alt-left,’ which Trump just blamed for some of the violence in Charlottesville? WaPo

Burying the Lie of the “Alt-Left” Jacobin

What Trump gets wrong about Confederate statues, in one chart Vox

How Women In The KKK Were Instrumental To Its Rise Buzzfeed. A special place in hell, eh?

Beyond a President’s Worst Fears, a Mob With Torches Arrived Chronicle of Higher Education. A university administrator’s perspective…

Durham sheriff arrests ladder climber in Confederate statue destruction: ‘No one is getting away with what happened.’ Herald-Sun

New report claims DNC hack was an inside job — not Russia NY Post and What if the DNC Russian “hack” was really a leak after all? A new report raises questions media and Democrats would rather ignore Salon. When you’ve lost Salon…

Trump and the Allies Foreign Affairs

Julian Assange, a Man Without a Country The New Yorker

What to watch in the Nafta renegotiations FT

They snubbed Trump. But the Koch network has still exerted a surprising influence over the White House LA TImes

More than half the country says it will never change its opinion on Trump, no matter what WaPo

The Neoliberal Record of Kamala Harris: Reckon with it Instead of Attacking Critics Shadowproof (UserFriendly).

It’s the Economy, Democrats, but Inequality Is Not the Issue NYT. So says the Third Way.

Where the robots are Axios (Re Silc).

Nothing like this has happened in 323 years Martin Wolf, FT. Handy chart.

The Case for Regulating Before Harms Occur The Regulatory Review 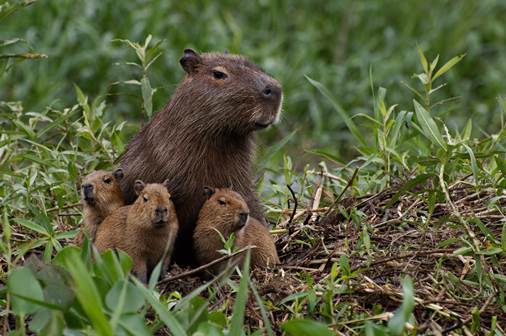 Readers, I know I ran a capybara Antidote yesterday, but they seem so calm, so preternaturally possessed of sang froid…