I was of three minds, / Like a tree / In which there are three blackbirds. — Wallace Stevens

I have evolved, or at least changed, in my gardening practice. I started gardening in 2007, when the economy was collapsing, and my motivation was growing food; proving to myself that I could grow enough food to support myself for a year, assuming an almost complete absence of money; hence vegetables and sheet mulch were my main focus. As my personal economy improved, I had less time to grow food — and I fell from grace by purchasing flats, instead of growing from seed, after which I had bugs — and began to focus on flowers; I ended up with a “Grandmother’s Garden” of masses of color, just like the one my own grandmother had, except I didn’t know, consciously, that I was following a pattern of design and practice. I love being involved in systems where I can do the right thing even while ignorant.

This post is a report on my gardening in 2017, in photo essay form. I’ve captioned each photo as a success or a failure, not out of some sort of WASP compulsion to be send everything to heaven or hell, but to help me focus on what to do next season, and what not to do. Cohen and Gooch, in Military Misfortunes, have three categories for failure: failure to anticipate, failure to learn, failure to adapt. I think all my failures are failures to learn, as I will explain below. (It would be interesting to consider whether categories for success are parallel, because I’m not sure that success necessarily flows from anticipation, learning, or adaptation. How to throw being open-minded enough to stumble onto a happy accident into which bucket? And how come “learning from experience” always seems to consider “experience” as failure?) So herewith– 1. Sunflowers (success). A view from above. This year an enormous patch of self-seeded sunflowers dominated the entire garden, attracting many birds, including a pair of bright yellow chickadees, and scattering many seeds on the ground, a happy accident that should successfully initiate next year’s cycle. 2. Bee Balm, Raspberries, Honeysuckle, Sunflowers, Filbert Trees (success). With regard to the town, the garden has three stacked functions: Privacy for me, raspberries for pedestrians, and a diplomatic signal to the town that the property is being taken care of. As you can see, the first three species, all invasive, plus the happy filbert trees and sunflowers, are fulfilling the first function admirably. The raspberries are all gone now, but during the season, I could hear, hidden at my garden desk behind my green screen, passers-by discussing whether they could pick them, and (usually) agreeing that they could. Which is what I wanted. As for the third function, I was approached on the street by a church lady, who told me how much she liked my garden. “It’s a mess,” I said. “It’s a habitat!” she said. So I suppose I am sending the signal I wish to send successfully, albeit with a distinct absence of bark mulch, lawn, gnomes, etc. 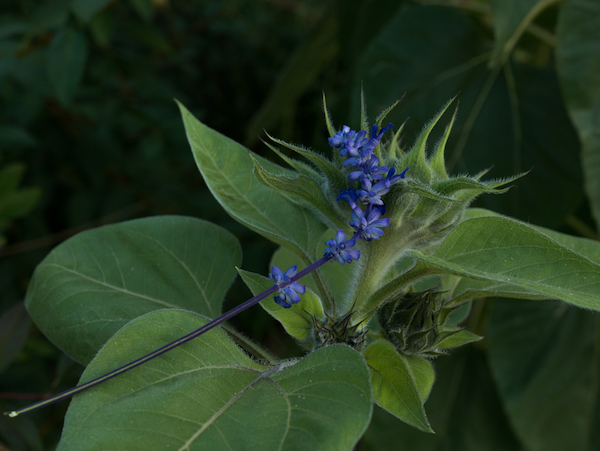 3. Sunflower (success). This sunflower is next to the sidewalk, and as you can see, some kind pedestrian actually placed these blue blossoms on an unflowered sunflower! (The blue flower isn’t anything I planted, so they brought it from somewhere else.) I would classify having elicited such an action as a success. 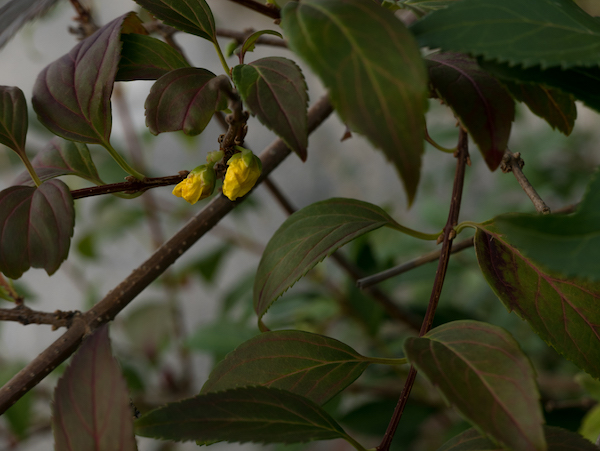 4. Forsythia (success). The forsythia have somehow become confused about the season, and flower partially in the fall; and this is a cold fall, so what are you thinking, forsythia? However, they successfully provide additional privacy for me, even if they are a failure in their own terms. 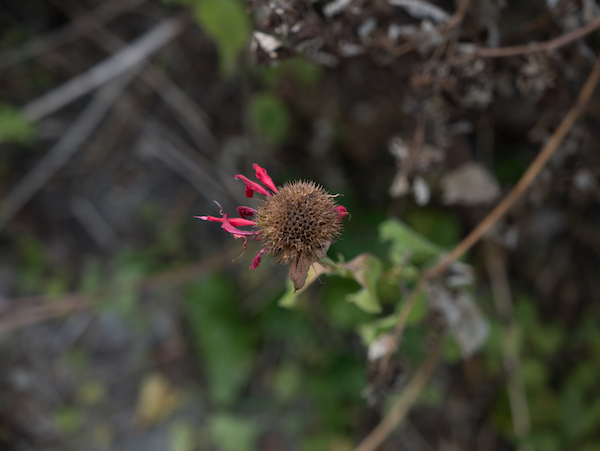 5. Bee Balm (success). At the height of the season, this perennial provides a great mass of red color that attracts extremely aggressive, dive-bombing hummingbirds. 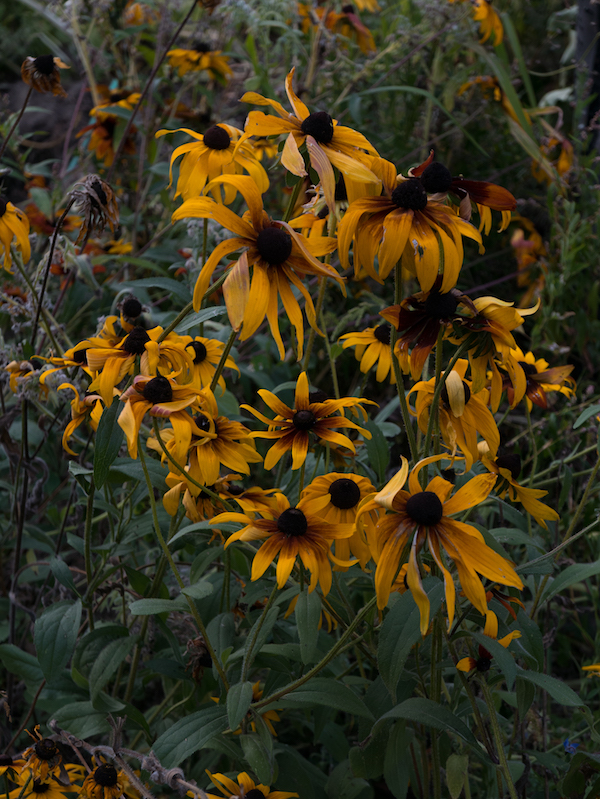 6. Black-Eyed Susans (success). Because I grew up in the Midwest, where there are miles and miles of this perennial along the summer roadside, Black-Eyed Susans are one of my favorite flowers. I thought I had lost them to the harsh winter, and indeed lost the two main patches, but others made themselves visible through the weeds, and I consolidated them into new patches. 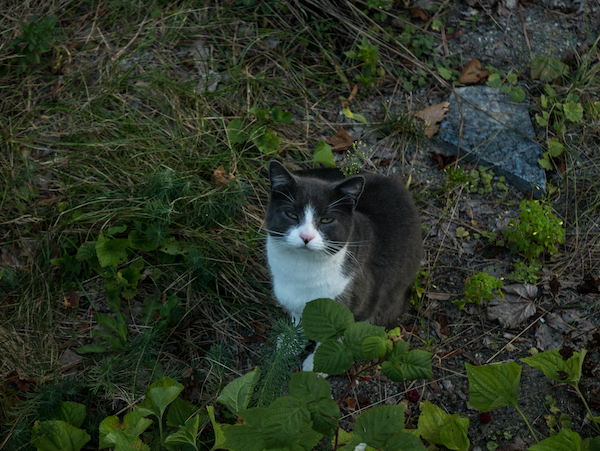 7. The Cat (success). I knew you would ask, so here is the cat, the apex predator of my habitat (besides me, that is). I did find out that the cat has an actual owner, across the street, and so I’m in the happy position of feeding it, and having it bring me small gifts — I keep a shovel next to my desk, now — without being totally responsible for them when the winter comes. Such a clever animal, to arrange for two households to feed it! 8. Tomatoes (failure to learn). Failure to learn, because I consistently promise myself that I will complete more tasks than I have time to do. The scrap of blue tarp is the sign of an uncompleted task two years ago (I had a pile of the gravel you see dumped on it, to shovel over onto the driveway, but that’s too much like work, making my promise to myself doubly delusional, because I don’t like work); and the tomato on the ground is a sign of an uncompleted task this year, viz., tying the tomato plants onto their bamboo hoops. 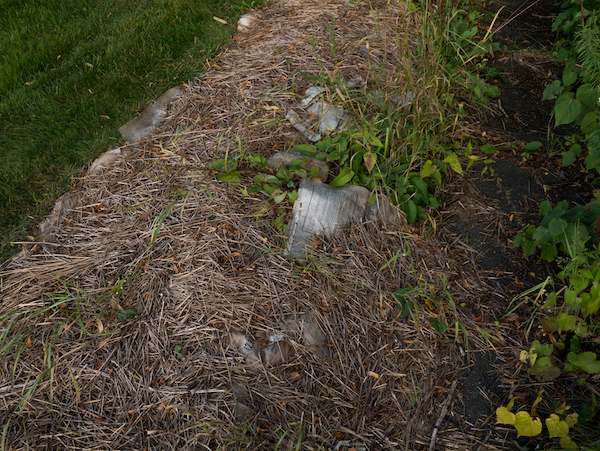 9. Lawn vs. Mulch (failure to learn). The same failure; I sheet-mulched this shady strip with good intentions, planning to put in borage and ferns, and then didn’t complete the task. I suppose straw and newspaper are better than a mass of weeds or quack grass, but the contrast to the kempt lawn at left is too much, and sends the wrong diplomatic signal to the town. Fortunately my neighbor has not complained. 10. Cukes (failure to learn). The same failure as with the tomatoes. (The orange power cord snaking over the straw, however, is a massive success; it feeds the laptop on my desk in the office.) 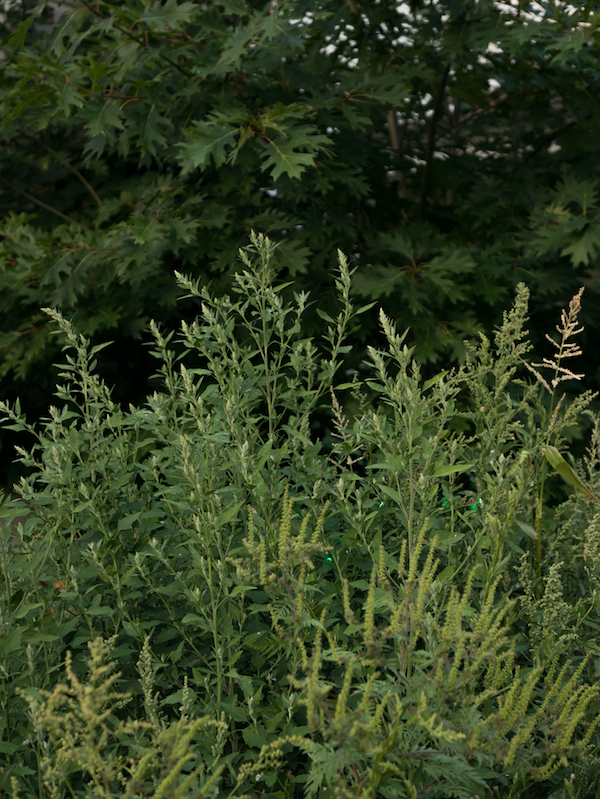 11. Weeds (failure to learn). I saved the worst for last; weeds — plants I don’t want — have completely taken over this patch, and I don’t know what to do about them, this year, or next. 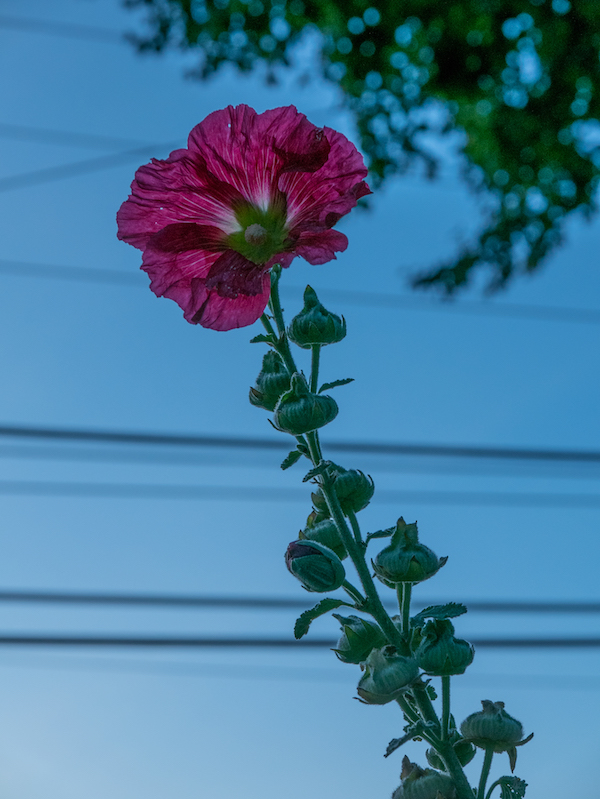 12. Hollyhocks (success). On the bright side, my twelve-foot tall hollyhocks are a tremendous (and perennial) wonderment! 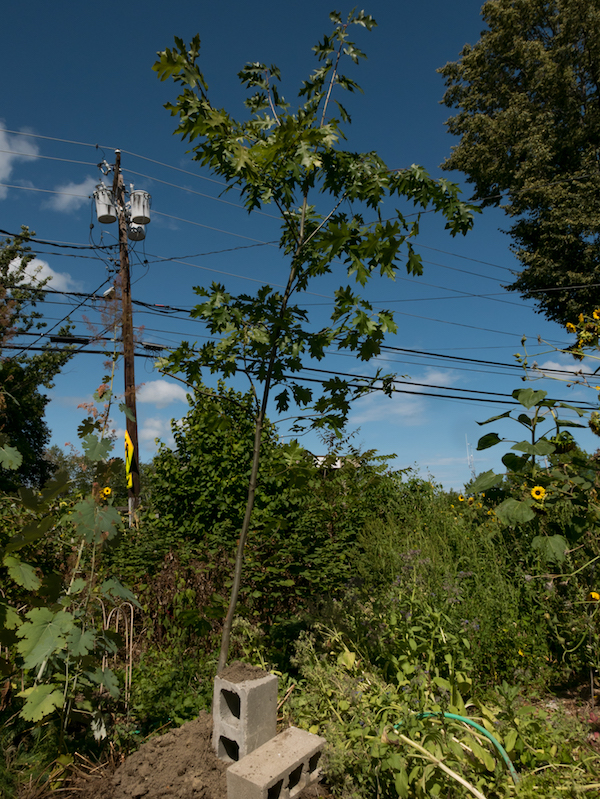 13. Transplanted Tree (success). I have a patch of small oaks — I think they’re oaks; they’re certainly not Norway maples, thank heavens — next to the house, behind the weeds in #11, and they will ultimately wreck the foundation. So I’ve promised myself MR SUBLIMINAL Ha ha! to cut the suckers down, and I’ve already transplanted the straightest, free-standing oak to the center of the garden, as you see here. Next year, I will give up the idea of vegetables entirely, and if the oak survives, it will be the centerpiece of the garden and provide a canopy. (This is a successful idea, but whether it will work out in practice I don’t know, because early fall is not the ideal time of year to transplant a tree.) I mulched it, have been flooding it with water, and gave it all the nitrogen I had; at least all its leaves haven’t immediately wilted, turned brown, and fallen off. And very fortunately, it didn’t blow over in the recent high winds. So we shall see.)

For me, the garden nets out extremely positive: My goal is to sit at my desk in my garden and work, and then take photographs when the light is sweet. And I have an interesting and challenging project in mind for the next season. All gardeners should be so lucky!

And if you’re working in your garden over the weekend, do enjoy!

To be parallel with Wallace Stevens’ Thirteen Ways of Looking at a Blackbird I left out the obligatory photo of a bee pollinating a sunflower blossom; here it is. 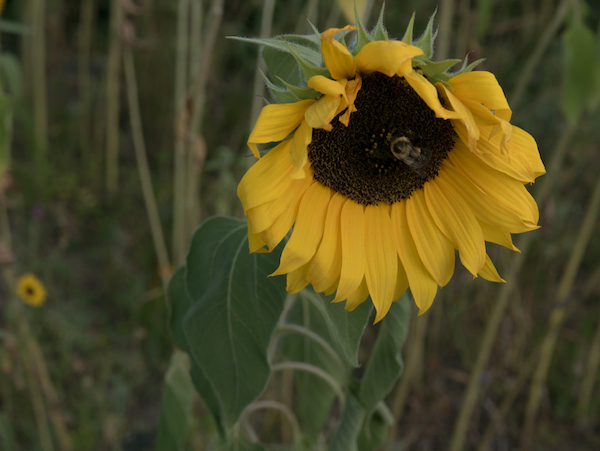 Appendix 1. Sunflower (success). I count this photo as a success, because by the end of the season, the sunflower patches were attracting many honeybees; at the start of the season, wasps and bumblebees and flies seemed to have taken over their niche.