This is Naked Capitalism fundraising week. 1582 donors have already invested in our efforts to combat corruption and predatory conduct, particularly in the financial realm. Please join us and participate via our donation page, which shows how to give via check, credit card, debit card, or PayPal. Read about why we’re doing this fundraiser,what we’ve accomplished in the last year and our current goal, more original reporting.

Yves here. Readers may have fun with “Shorter” takes on this post. My submission: “What about secular stagnation don’t you understand?”

“The Cost of Missing the Market Boom is Skyrocketing”, says a Bloomberg headline today. That must be the scariest headline I’ve seen in quite a while. For starters, it’s misleading, because people who ‘missed’ the boom haven’t lost anything other than virtual wealth, which is also the only thing those who haven’t ‘missed’ it, have acquired.

Well, sure, unless they sell their stocks. But a large majority of them won’t, because then they would ‘miss’ out on the market boom… Some aspects of psychology don’t require years of study. Is that what behavioral economics is all about?

And it’s not just the headline, the entire article is scary as all hell. It reads way more like a piece of pure and undiluted stockbroker propaganda that it does resemble actual objective journalism, which Bloomberg would like to tell you it delivers. And it makes its point using some pretty dubious claims to boot:

The Cost of Missing the Market Boom Is Skyrocketing

Skepticism in global equity markets is getting expensive. From Japan to Brazil and the U.S. as well as places like Greece and Ukraine, an epic year in equities is defying naysayers and rewarding anyone who staked a claim on corporate ownership. Records are falling, with about a quarter of national equity benchmarks at or within 2% of an all-time high.

If equity markets in places like Greece and Ukraine, ravaged by -in that order- financial and/or actual warfare, are booming, you don’t need to fire too many neurons to understand something’s amiss. Some of their companies may be doing okay, but not their entire economies. Their boom must be a warning sign, not some bullish signal. That makes no sense. Stocks in Aleppo may be thriving too, but…

“You’ve heard people being bearish for eight years. They were wrong,” said Jeffrey Saut, chief investment strategist at St. Petersburg, Florida-based Raymond James, which oversees $500 billion. “The proof is in the returns.” To put this year’s gains in perspective, the value of global equities is now 3 1/2 times that at the financial crisis bottom in March 2009.

If markets crash by, pick a number, 20-30-50% next week, will Mr. Saut still claim “The proof is in the returns”? I doubt it. Though this time he might be right. As for the ‘value’ of global equities being 250% (give or take) higher than in March 2009, does that mean those who were -or still are- bearish were wrong? Or is there some remote chance that the equities are part of a giant planetwide bubble?

Aided by an 8% drop in the U.S. currency, the dollar-denominated capitalization of worldwide shares appreciated in 2017 by an amount – $20 trillion – that is comparable to the total value of all equities nine years ago. And yet skeptics still abound, pointing to stretched valuations or policy uncertainty from Washington to Brussels. Those concerns are nothing new, but heeding to them is proving an especially costly mistake.

$20 trillion. That’s a lot of dough. It’s what all equities in the world combined were ‘worth’ 9 years ago. It’s also, oh irony, awfully close to the total increase in central bank balance sheets, through QE etc. Might the two be related in any way? 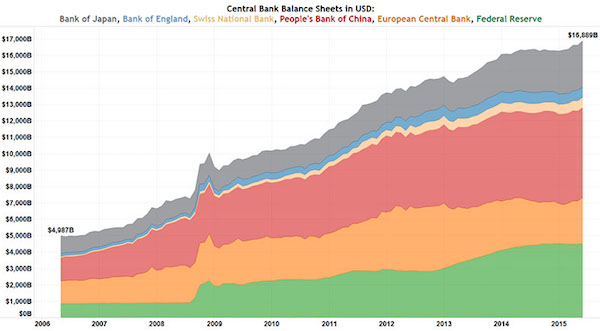 Clinging to such concerns means discounting a harmonized recovery in the global economy that’s virtually without precedent – and set to pick up steam, according to the IMF. At the same time, inflation remains tepid, enabling major central banks to maintain accommodative stances.

‘Harmonized recovery’ is a priceless find. But you have to feel for anyone who believes it. And it’s obviously over the top ironic that central banks are said to be ‘enabled’ to keep rates low precisely because they fail to both understand and raise inflation. Let’s call it the perks of failure.

“When policy is easy and growth is strong, this is an environment more conducive for people paying up for valuations,” said Andrew Sheets, chief cross-asset strategist at Morgan Stanley. “The markets are up in line with what the earnings have done, and stronger earnings helped drive a higher level of enthusiasm and a higher level of risk taking.”

Oh boy. He actually said that? What have earnings done? He hasn’t read any of the warnings on P/E (price/earnings) for the (US) market in general –“the Shiller P/E Cyclically Adjusted P/E, or CAPE, ratio, which is based on the S&P 500’s average inflation-adjusted earnings from the previous 10 years, is above 30 when its average is 16.8”– or for individual companies (tech) in particular?

The CAPE ratio has been higher than it is now only twice in history: right before the Great Depression and during the dotcom bubble, when tech companies didn’t even have to be able to fog a mirror to attract billions in ‘capital’. And the chief cross-asset strategist at Morgan Stanley says markets are in line with earnings? Again, oh boy. 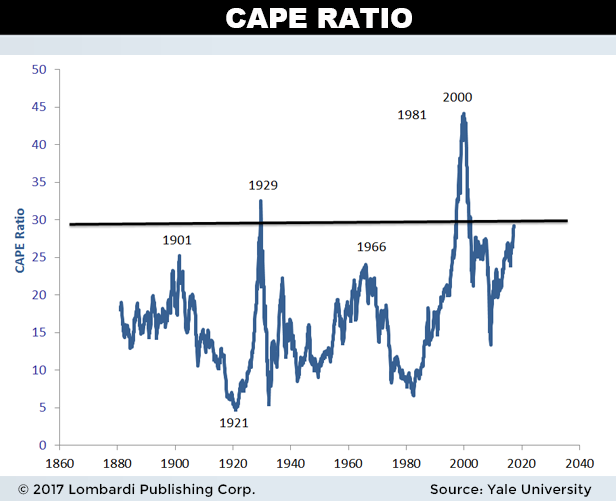 The numbers are impressive: more than 85% of the 95 benchmark indexes tracked by Bloomberg worldwide are up this year, on course for the broadest gain since the bull market started. Emerging markets have surged 31%, developed nations are up 16%. Big companies are becoming huge, from Apple to Alibaba.

Look, emerging markets and developed economies have borrowed up the wazoo. Because they could. Often in US dollars. That may cause a -temporary- gain in stock markets, but it casts a dark spell over the reality of these markets. If it’s that obvious that a substantial part of your happy news comes from debt, there’s very little reason to celebrate.

Technology megacaps occupy all top six spots in the ranks of the world’s largest companies by market capitalization for the first time ever. Up 39% this year, the $1 trillion those firms added in value equals the combined worth of the world’s six-biggest companies at the bear market bottom in 2009. Apple, priced at $810 billion, is good for the total value of the 400 smallest companies in the S&P 500.

To cast those exact same words in a whole different light, no, Apple is not ‘good for the total value of the 400 smallest companies in the S&P 500’. Yes, you can argue that Apple’s ‘value’ has lifted other stocks too, but this has happened in a time of zero price discovery AND near zero interest rates. That means people have no way to figure out if a company is actually doing well, so it’s safer to park their cash in Apple.

Ergo: Apple, and the FANGs in general, take valuable money out of the stock market. At the same time that they, companies with P/E earnings ratios to the moon and back, buy back their stocks at blinding speeds. So yeah, Apple may be ‘good’ for the total value of the 400 smallest companies in the S&P 500, but at the same time it’s not good for that value at all. It’s killing companies by sucking up potential productive investment.

And Apple’s just an example. Silicon Valley as a whole is a scourge upon America’s economy, hoovering away even the cheapest and easiest money and redirecting it to questionable start-up projects with very questionable P/E ratios. But then, that’s what you get without price discovery. 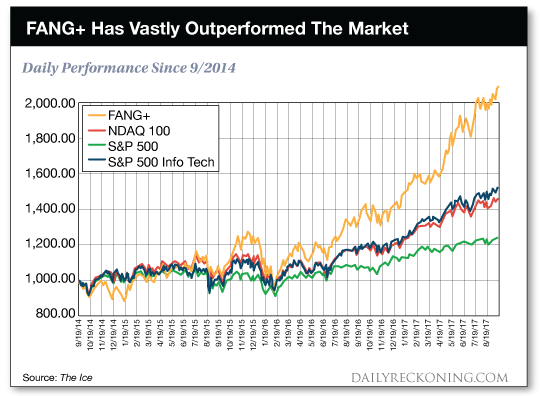 Overall, U.S. corporate earnings are expected to rise 11% this year, on track to be the best profit growth since 2010. And after years of disappointments, European profits are set to climb 14% in 2017, Bloomberg data show. The expectations for both regions are roughly in line with forecasts made at the beginning of the year, defying the usual pattern of analysts downgrading their estimates as the months go by.

Come on, the European Central Bank has been buying bonds and securities at a rate of €60 billion a month for years now. How can it be any wonder that officially stock markets are up 14%? Maybe we should be surprised it’s not 114%. Maybe the one main point in all of this is that the ECB is still buying at that rate, and thereby signaling things are still as bad as when they started doing it.

Meanwhile, Asia is home to some of the world’s steepest rallies, led by Hong Kong stocks that are up 29% this year. Shares in Tokyo also hit fresh decade highs this week, bolstered by investor confidence before the local corporate earnings season and a snap election this month. “Asia will benefit from continued improving regional growth, stable macroeconomic conditions and undemanding valuations,” said BNP Paribas Asset Management’s head of Asia Pacific equities Arthur Kwong. Any pullback in Asian equities after the year-to-date rally presents a buying opportunity for long-term investors, he wrote in a note.

In Japan, so-called investor confidence is based solely on the Bank of Japan continuing to purchase anything that’s not bolted down. In China, the central bank buys the kitchen sink as well. How, knowing that, can you harp on about increased investor confidence? As if central banks taking over entire economies either isn’t happening, or makes no difference to economies? Buying opportunity?

Global economic growth has been robust in most places, with Europe finally joining the party and the euro-area economy on track for its best year since at least 2010. The region’s steady recovery has eclipsed worries about populism, which a few years ago would have been enough to derail any stock market rally.

No, global economic growth has not been ‘robust’. Stock market growth perhaps has been, but that’s only due to QE and buybacks. Still, stock markets are not the economy.

“I’ve never been so optimistic about the global economy,” said Vincent Juvyns, global market strategist at J.P. Morgan Asset Management. “Ten years after the financial crisis, Europe is recovering and we have synchronized economic growth around the world. Even if we get it wrong on a country or two, it doesn’t change the big picture, which is positive for the equity markets.”

Oh man. And at that exact moment the ECB announces it wants to cut its QE purchase in half by next year.

Nowhere is the shifting sentiment more pronounced than in Europe, where global investors began the year with a election calendar looming like a sword of Damocles. Ten months later, the Euro Stoxx 50 Index is up 10%, Italy’s FTSE MIB Index is up 17% and Germany’s DAX Index is up 13%. The rally is even stronger when priced in U.S. dollars, with the Euro Stoxx 50 up 23% since the start of the year.

Sure, whatever. I don’t want to kill your dream, and I don’t have to. The dream will kill itself. You’ll hear a monumental ‘POP’ go off, and then you’re back in reality.