Largest Ever Group of Scientists Issues Humanity an Urgent Warning: Time Is Running Out Science Alert

Thirty Million Americans Just Got High Blood Pressure Bloomberg. Money paragraph, in both senses of the expression: “Of those newly categorized as having high blood pressure, some 4.2 million also have other risk factors for heart disease. These individuals should start taking medicine to lower their numbers, the researchers said.”

New study suggests it may be fructan, not gluten, that is upsetting people’s stomachs MedicalXPress (Robert M). Why I regard food fads with considerable skepticism.

Coffee Boom: Profits in the West and Poverty in the South Der Spiegel (resilc)

Brexit immigration changes have UK farmers upset over rotting agriculture crops Quartz. Our Colonel Smithers has discussed the departure of farm workers and the difficulty of replacing them.

Commentary: The truth behind the U.S. show of force in Asia Reuters (resilc). “The resources plowed into them were stupendous – $5.6 trillion so far, academics at Brown University estimated this month. That would imply a cost per individual U.S. taxpayer of more than $23,000, including future care for veterans.”

FDA Approves a Digital Pill That Can Track When You Swallowed It Bloomberg. Faraday cage vests coming to a store near you? Or would it need to be more like a leotard or burqua? And could you fry it with a magnetic pulse? Techies please speak up!

America Doesn’t Need Trade Like Other Nations Do Bloomberg

Frank Rich: What Comes After Trump Could Be More Dangerous New York Magazine

Hundreds of millionaires are banding together to tell Congress: Raise our taxes CNBC

Steven Mnuchin Says Trump Won’t Bend on Corporate Tax Rate of 20% Wall Street Journal. Good luck with that. As we have said, there aren’t enough deductions that can be eliminates to pay for this, and the deficit hawks insist the cuts have to be more or less paid for.

Trump ready to put his own mark on tax debate Politico. Subhead: The president, who’s been in touch with senior members of Congress, tweeted on Monday with specific proposals – none of which are reflected in the proposed legislation.

GOP senator: We must protect the Senate’s integrity if Moore doesn’t step aside The Hill (resilc)

If Roy Moore Isn’t Rock Bottom for Republicans, What Is? Rolling Stone (resilc)

The Kansas Disaster Is the Republican Dream Esquire (resilc). “There are now 28 states on board this death train. They are six states away. This is a clear and present danger.”

How flashy displays of wealth have changed BBC

Bill Gates, Jeff Bezos, and Warren Buffett Own More Wealth Than the Entire Poorest Half of the US Population Nation

Antidote du jour (Lawrence R). I am a big fan of cross-species friendships. Our eventually enormous tabby Michael grew up with a neighbor dog Buddy and they regularly slept all curled up together. This is Ingo, a Belgian shepherd, and Poldi, a one-year-old owlet. 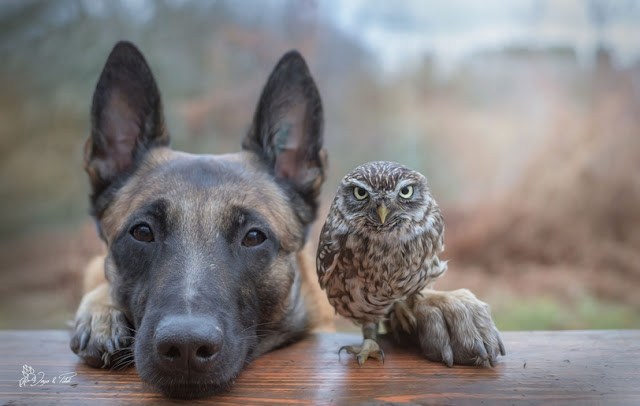 And a bonus from reader Chana: