Today’s SEC filing Tesla issued with respect to Musk’s future stock awards refers to him almost exclusively as “Elon” instead of “Elon Musk”. Which is another red flag. (Who is he trying to be, Madonna?)

By Matthew Klippenstein, who heads Electron Communications, a cleantech-centric consultancy. A long-time chronicler of the Canadian electric car market, he was the first person to report monthly Tesla sales figures for any country. He also co-hosts the CleanTech Talk podcast

The Model S coalition of technophiles (techies) and progressives gave Tesla a strong tailwind when the vehicle launched. Techies formed the base, while progressives were the balance of the coalition. But while they came together for the Model S to strike a blow against Big Oil, these two groups aren’t natural allies.

We can see the rift growing in real time: while techies continue to celebrate Amazon, Uber, and Silicon Valley in general, there’s an escalating progressive backlash against labor conditions at warehouse distribution centres, more and more and more and more evidence of Uber’s culture of toxic lawlessness, and the obscene excesses of startup culture (which include a Dickensian digital class divide, possibly-endemic sexism, predatory sex parties and entitlement complexes worthy of the sons of Trump — and that’s only the stuff we know about so far). 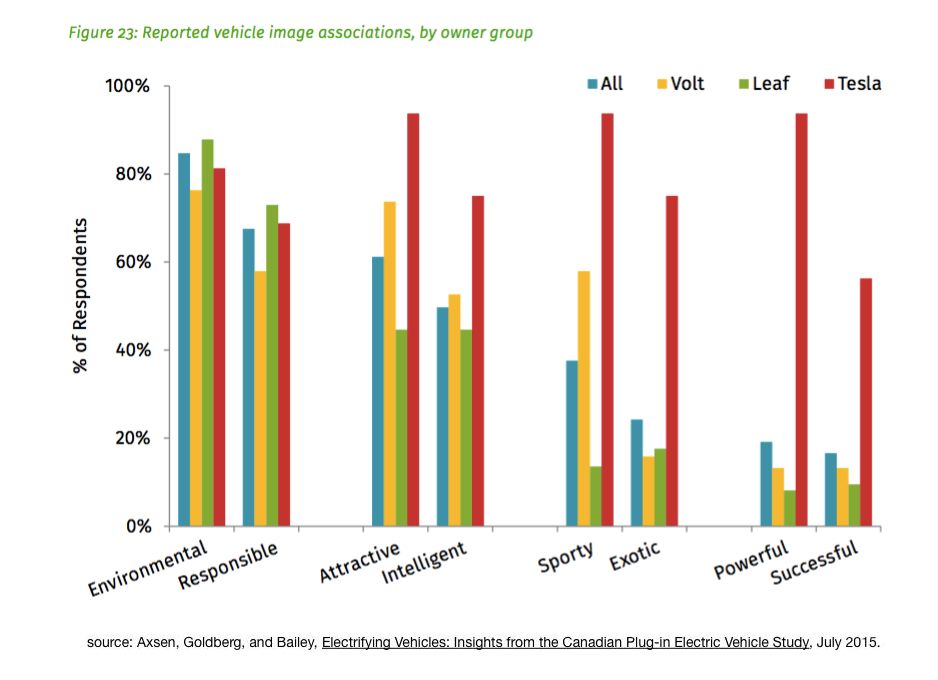 The chart above shows the results of a study of Volt, Leaf, and Model S early adopters who were asked what images would be attributed to their vehicles. This tells us something about the buyers, because consumers purchase products whose so-called “symbolic benefits” (the brand, basically) match their own self-image, values, interests, and aspirations.

Volt and Leaf owners (yellow and green bars, respectively) are pretty similar, except when it comes to thinking their vehicle is attractive or sporty — the styling of the Leaf 1.0 is, shall we say, an acquired taste! Joking aside, this tells us that first-generation Leaf 1.0 buyers, like first-generation Prius buyers before them, really didn’t care about style. These people, and others of like mind, form the progressive coalition.

The Tesla early adopters are different in two categories, and extremely different in four, suggesting that Tesla buyers have different motivations than Volt and Leaf owners. Tesla’s “tribe” wants status goods – which for automobiles means something sporty, exotic, powerful, and successful. They’re Tesla’s techie base.

The Model S coalition emerged from the close overlap between the two groups in the categories of wanting vehicles that were environmental and responsible. I’ve annotated Figure 25 from the report below. While it’s based on in-depth interviews of only 24 individuals, the findings are largely consistent with a cluster analysis of 635 respondents. 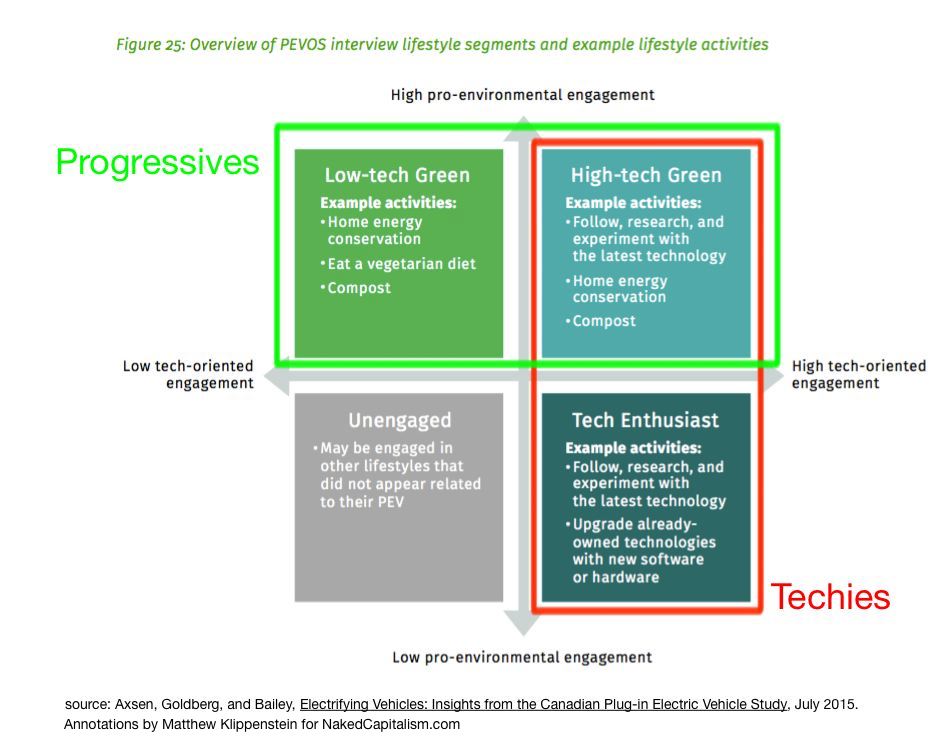 The challenge Musk faces is that there are a lot more progressives than there are techies; they’re likely to be offended by some of his recent actions, so he risks losing their support; and that would have catastrophic consequences. We’ll go through some of the more odious lowlights, then explain why these enrage progressives so.

The University of California–Berkeley, a half-hour’s AutoPilot ride from Tesla’s Fremont headquarters, has performed pioneering research showing how as people gain wealth and/or social status, they lose their ability to empathize with others. This manifests as narcissism, increased unethical behavior, and reduced compassion.

What happens when we consider Musk’s recent behavior through that lens?

Musk may believe that hitting back hard at critics projects strength and dissuades future attacks. That may be true. But it’s also true that the group who react to criticism most aggressively … are narcissists.

Will treating her in this manner strengthen the Model S coalition, or weaken Tesla’s support among progressives, feminists in particular? As loathsome as it is for a left-leaning environmentalist to type, Koch Industries has probably been more respectful towards women alleging sexual discrimination than tech’s most temperamental titan.

We’ll finish with this hat trick:

If this had been the first time I’d heard Musk trying to demolish a critic or journalist, I’d probably believe his side of the story. But the prior two times he played the “should be ashamed” card, he had a really weak case: he should have been appreciative of the $100,000,000’s of 100%-profit-margin revenue CARB credits have provided Tesla, and a layoff is a layoff is a layoff, whatever euphemism you couch it in. So from past precedent, him saying the journalist should be ashamed makes me more likely to believe her reporting: to resurrect the cliched hashtag, #ImWithHer. (Several people have said they didn’t see any sexual activity at the party. I believe them, having been to parties where drugs were present, but not in the rooms I was in.)

Moving away from specifics, the problem in these three cases is that repeatedly saying others should be ashamed of themselves — trying to put them in a one-down position relative to you — can’t be normal. It brings to mind that other “n”-word from the Berkeley research: the one Musk’s ex-wife Justine ruefully wrote about.

Elon Musk’s default response to criticism is bombast and bluster, with ad hominem attacks thrown in for good measure. Three times in the past 18 months, he’s even claimed other parties he disagrees with should be ashamed.

Let that sink in.

Musk’s techie base will probably forgive the above examples as acceptable collateral damage from an impassioned man whose heart is in the right place. But for progressives, this behavior isn’t just a cardinal (deadly) sin, it’s the worst of the secular sins.

Cognitive linguist George Lakoff explains why in his book, Moral Politics. For progressives, selfishness and antisocial behavior are the primary social vices. The major reason progressives have turned against Silicon Valley is the antisocial (exploitative and/or unethical) nature of many of its titans’ behavior.

In Tesla’s case, the examples above are nothing if not antisocial. The targets of Musk’s vitriol have included women, lawyers for people of color and the LGBTQ community (perhaps he realized how bad the optics of attacking the plaintiffs directly would have been), unions, public transit advocates, CARB, and on several occasions the media. They read like a go-to scapegoat list from Fox News.

The next time Tesla needs help — and all businesses occasionally do, whether it’s with finances, policy support, social licence, or other domains — will progressives stand with him? After Tesla’s vindictivenes towards the aforementioned female engineer, will women’s groups offer support? How about organizations for people of color, or the LGBTQ community? Or the 39% of Americans who want unions to have more influence, or the 61% of Americans who approve of unions?

And if some of those groups only express lukewarm support, will he turn on them, too? Remember, techie and progressive opinion on Silicon Valley is already divorcing. Even if Musk was a model CEO — composed, professional, never impulsive, always respectful — Tesla (and SpaceX and his other ventures) would be caught in the maelstrom. But on many occasions, he’s been the polar opposite. If he doesn’t rein in his temper — if he doesn’t start empathizing with others when he disagrees with them — he’s going to lose the progressive coalition. If and when that happens, his support will have reached sub-critical mass. It will have shrunk below the level he needs to achieve his goals:

I want Tesla to succeed, because I want to believe that plucky, audacious electric car upstarts can revolutionize the auto industry for the better. It’s a narrative I buy into. It reinforces my dearest values.

With the aforementioned bilious barbs (and countless others skipped over for sake of word count) my desire for Tesla’s success is about evenly balanced with my desire to see Musk face serious consequences for his antisocial behaviour. And if it’s a close call for me, he’s probably lost a lot of progressives already: the aforementioned urban planners and transit advocates and union employees, for starters.

This is all the more reason someone needs to reach out to him before he crosses the Rubicon — someone he trusts and will listen to — to shake him out of his comfort zone and explain that what worked when he was a scrappy disruptor “punching up” against Big Oil bullies is completely backfiring, now that he’s a bullying tech titan and is “punching down” at others whose station in life is more modest than his.

The vigorous support of the Model S coalition of techies and progressives helped propel Tesla to success. Its triumph (thus far) has brought Musk extraordinary wealth, fame, and influence. These are scientifically demonstrated to corrode people’s judgment, and their fingerprints are all over his consistent inability to respond civilly to criticism. Progressives are already turning against Silicon Valley culture, and Musk’s behavior will cause them to turn on him, unless he maps a fast, full change of course.

In short, Musk’s path to success has narrowed to a razor’s edge. With everything coming to a head this year, 2018 will tell us whether he can walk it, by keeping the coalition he needs, together.