Yves here. I am sure readers will have insightful comments, but let me offer three thoughts. The first is that the article offers “uneven access to technology” as an explanation for the wage gap and therefore difference in general prosperity between coastal cities and rural areas in the US. It then offers a variant of the “let them eat training” remedy.

This seems like looking at a symptom and treating it as a root cause. We’ve had at least 40 years of erosion in the caliber of primary education in the US, measured among other things in the falling standing of US students in international comparisons and the recalibration of the SAT in 1994 as a result of falling test scores. Recall that, as Elizabeth Warren pointed out in her 2003 book, The Two Income Trap, that a, arguably the, driver of rising home prices was increased competition for homes in “better” school districts. That was a reflection of rising inequality and the deterioration of the perceived and probably actual teaching in “lesser” schools.

Another factor has been the erosion of funding (and let us not forget adminisphere bloat) and resulting rising costs of public universities. It used to be that bright kids who had gone to not-so-hot primary schools could if they applied themselves, make up for what they had missed in their freshman year in college, and an inexpensive public college was worth the wager. That’s not such a sound bet now.

Let us put it another way: how do you think someone from the boonies, who was a self taught computer genius, would fare if they tried making their way in a coastal city now? I know someone who fit that profile (no college degree on top of that, but he was doing internet stuff so early that he “owned” a block of class B IP addresses) and by the early 1990s was in a very well paid Wall Street IT job at one of the cutting-edge firms. That sort of transition would seem unthinkable now due to the much greater emphasis on credentials, which institutionalizes class differences.

A second factor that gets nary a mention is inadequate government spending in the post crisis era and undue attention to the state of asset prices, as opposed to worker wages. Goosing asset prices to salvage the banks, as opposed to making them clean up their balance sheets and using fiscal spending to offset the impact of the deleveraging, would have resulted in a less unequal distribution of wages and growth, which most economists are willing to concede is slowing down growth. A less finance/asset price centric recovery is likely to have resulted in more moderate increases in urban housing prices, which also somewhat lower the barrier for people from outside to try to relocate there.

Finally, I suggest readers contrast this post with the one we ran earlier today from VoxEU, which has a real sense of urgency about places left behind which is remarkably absent here. This isn’t the fault of the Bruegel author but of the underlying pieces that she has summarized.

Both in Europe and the US, economists are starting to notice how the economies of cities have been sometimes diverging from the economies of states. While some areas thrive, others may be permanently left behind. Maybe it is time to adopt a more clearly sub-national perspective. We review recent contributions on this issue.

In this week’s Free Lunch, Martin Sandbu makes the very interesting claim that “all economics is local”, and that sustainability of economic strategies depend on their local effects. Many studies show that intensifying economic vulnerability at the local or regional level is closely associated with anti-establishment votes for political disruption or for extremist or populist parties. The deindustrialisation that rich countries have undergone at the hands of technological change (and to a lesser extent globalisation) has created a class of people who are economically left behind, rebelling against the liberal economic and political order.

It matters that change has not just disadvantaged particular socio-economic groups, but that it also affects different places in very different ways. A shift in economic structure from labour-intensive manufacturing to services has different distributive consequences not only across sectors, but also geographically. In particular, it is bad for places traditionally hosting manufacturing — mid-sized factory towns — and good for knowledge-intensive places such as the big cosmopolitan cities. What makes structural change so hard to manage is precisely how it tends to hit the same group with several blows: those already hurt by working moribund jobs are doubly hurt because they live in places particularly concentrated in those jobs. Sandbu offers three principles to approach this change in perspective.

Other authors in the FT have looked at this issue before. Sarah O’Connorfor example had a long must-read report on the city of Blackpool in the UK, arguing that the city embodies much of what is going wrong on the fringes of Britain and wondering whether there is a way to save the towns that the economy has forgotten. Economists in the US often contrast the dynamism of America’s coasts with the malaise of its heartlands. But in Britain, it is increasingly the reverse, with seaside towns like Blackpool exporting healthy skilled people and importing the unskilled, the unemployed and the unwell.

More than a tenth of the town’s working-age inhabitants live on state benefits paid to those deemed too sick to work, antidepressant prescription rates are among the highest in the country and life expectancy, already the lowest in England, has recently started to fall. To some extent, Blackpool shares some of the traits of desperation that we discussed in a previous blog review regarding the US opioid epidemics (Figure 1 below). O’Connor argues that the story of Blackpool is a story about the failure of national policies to support places on the edge, but  it is also a story about how, in the face of necessity, people are trying new ideas to turn things around and break the local vicious circle. 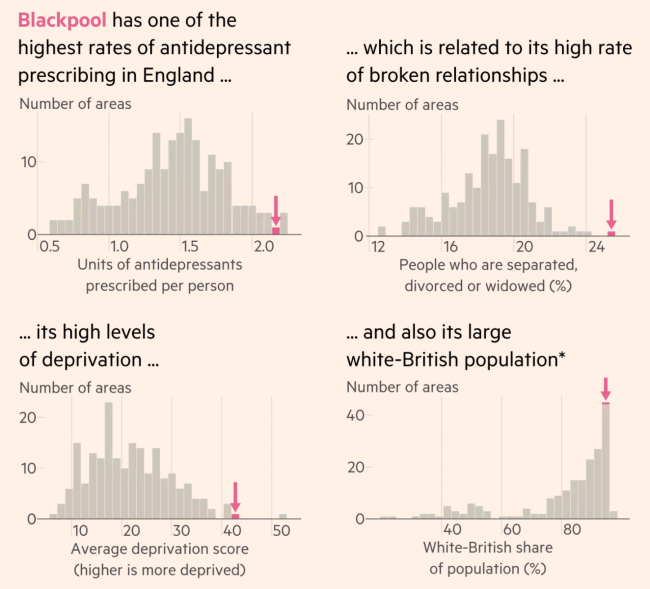 The Centre for Cities released its 2018 report looking at the impact of increasing automation on 63 of the UK’s cities, which gives a clear picture of the differences at the sub-national level. Overall, the report finds that one in five jobs in cities across Great Britain is in an occupation that is very likely to shrink. This amounts to approximately 3.6 million jobs, or 20.2% of the current workforce in cities. In places like Mansfield, Sunderland, Wakefield and Stoke almost 30% of the current workforce is in an occupation very likely to shrink by 2030 (Figure below). This contrasts with cities such as Cambridge and Oxford, with less than 15% of jobs at risk.

While big cities are relatively less exposed to occupations likely to shrink, they are nevertheless likely to see a great deal of disruption. For example, London and Worthing have a similar share of jobs likely to see a decrease in demand (16.1% in London, 16.0% in Worthing), but this translates to around 908,000 jobs in London – 25% of all jobs at risk in cities across Great Britain – and only 8,400 jobs in Worthing, which is just 0.2% of all jobs at risk in cities. All cities are likely to see jobs growth by 2030 and around half of this will be in publicly funded occupations. Yet, looking at the private sector, there is more variation – some cities (mainly in the South) will see many more high-skilled private sector jobs growth, whereas others (mainly outside of the South) will see a growth in lower-skilled private-sector work. Significantly, the report also finds that it is the same cities which are most at risk that also voted to leave the EU and are more dependent on welfare. In a recent paper, Algan, Guriev, Papaioannou and Passari look at Europe more broadly. They investigate the European “trust crisis” and the rise of populism taking a sub-national perspective, and looking at the evolution of unemployment, attitudes and voting from 2000 to 2017 in more than 200 regions throughout 26 European countries. They find a strong relationship between increases in unemployment and voting for non-mainstream, especially populist parties, as well as a correlation between the increases in unemployment and a decline in trust in national and European political institutions. The correlation between unemployment and attitudes towards immigrants is muted, especially for their cultural impact.

The authors also extract the component of increases in unemployment stemming from the pre-crisis structure of the economy, and in particular construction share in regional value added which is strongly related both to the build-up and the burst of the crisis. Crisis-driven economic insecurity is found to be a substantial driver of populism and political distrust. An important policy implication from the European economic crisis is that national governments and the EU should focus not only on structural reforms, but also on protecting the trust of their citizens from the corrosive effect of economic insecurity. 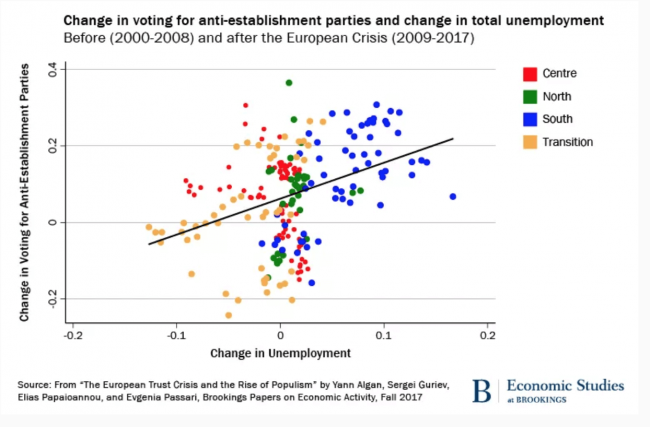 As for the US, The Economist has a striking chart (see below) showing how the economies of States and cities are diverging. The chart is based on a recent paper by Alison Weingarden of the Federal Reserve Board, who estimates that since 2007 the gap between the labour-force participation rate of “prime-age” workers aged 25 to 54 in big cities and similar workers in rural areas has grown from 1 to 3.8 percentage points. Since 2015, the difference between the unemployment rate of prime age city-dwellers and their rural counterparts has increased from 0.3 to 1.2 percentage points. 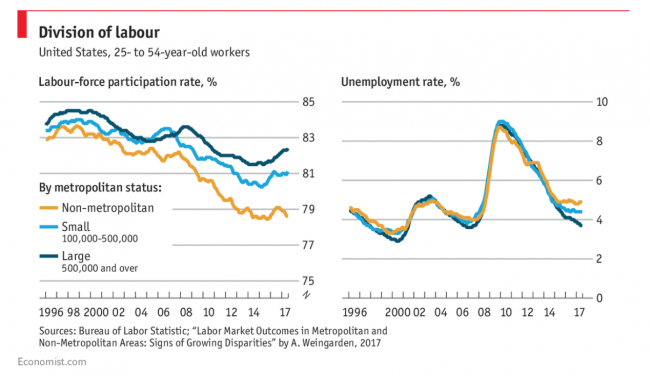 A longer Economist article wonders what can be done to help marginalised regions in the rich world. Across a wide range of industries the share of output generated by America’s top four metropolitan areas for each industry has risen, often substantially. In the financial industry their share of output rose from 18% to 29%, and in retail, wholesale and logistics from 15% to 21% between 2002 and 2014. The Economist offers several reasons why the poorer regions of rich economies did not adjust as well to the winners-take-more geography of globalisation. One is that technology seems to be moving from place to place less easily than it used to: globally competitive firms have got better at mastering complex new technologies, but diffusion of technology from top firms in one country to laggard firms in the same country has slowed down. A second aspect is that labour mobility – even in America – has become lower. On one hand, high housing costs in the successful cities makes relocation difficult. On the other hand, the push to leave failing places has weakened and the growth of the welfare state limits the chances that declining cities will disappear.

Rather than attempting to seed clusters – the Economist argues – governments could instead focus on spreading know-how in order to increase the attractiveness of laggard regions to productive firms. Improving the investment climate in struggling areas could help, as would improving educational opportunities. Ronald Brownstein at The Atlantic has a very interesting account of how mayors at the local level are trying to channel economic growth to neglected places.