You cannot make this stuff up.

At the end of this post is embedded a technical note from the UK government, addressed to no one in particular, in which the UK asks the rest of the world to let the UK keep the same terms of any bi-lateral deals with the EU in place with respect to them too during the transition period. The note acknowledges that multi-lateral deals are a different kettle of fish.

This approach is underpinned by international law and practice, including Article 31 of the Vienna Convention on the Law of Treaties (VCLT), which provides that a treaty is to be interpreted in its context, which can include a subsequent agreement between the parties regarding its interpretation or application.

Help me. The UK wasn’t a party to any of these agreements. It was the EU. So the Uk can’t be one of the parties per the language above because it did not enter into the original agreement.1

So what does this mean in practice?

It is another demonstration of utter UK incompetence. How long has Theresa May been talking about her pet implementation period, and only now does anyone in her Government realize that it (along with Brexit generally) entail other moving parts besides getting an eventual pact on trade and services with the EU? The Financial Times was onto this last May, in After Brexit: the UK will need to renegotiate at least 759 treaties, yet the Government has apparently been trying to stick its head in the sand since then. Key sections from its account:

While Brexit is often cast as an affair between Brussels and London, in practice Britain’s exit will open more than 750 separate time-pressured mini-negotiations worldwide, according to Financial Times research. And there are no obvious shortcuts: even a basic transition after 2019 requires not just EU-UK approval, but the deal-by-deal authorisation of every third country involved.

“The nearest precedent you can think of is a cessation of a country — you are almost starting from scratch,” says Andrew Hood, a former UK government lawyer now at Dechert. “It will be a very difficult, iterative process.”…

Each agreement must be reviewed, the country approached, the decision makers found, meetings arranged, trips made, negotiations started and completed — all against a ticking clock and the backdrop of Brexit, with the legal and practical constraints that brings. Most inconvenient of all, many countries want to know the outcome of EU-UK talks before making their own commitments….

At its most granular level, the sheer administrative scale of the “third country” question is striking. Through analysis of the EU treaty database, the FT found 759 separate EU bilateral agreements with potential relevance to Britain, covering trade in nuclear goods, customs, fisheries, trade, transport and regulatory co-operation in areas such as antitrust or financial services. 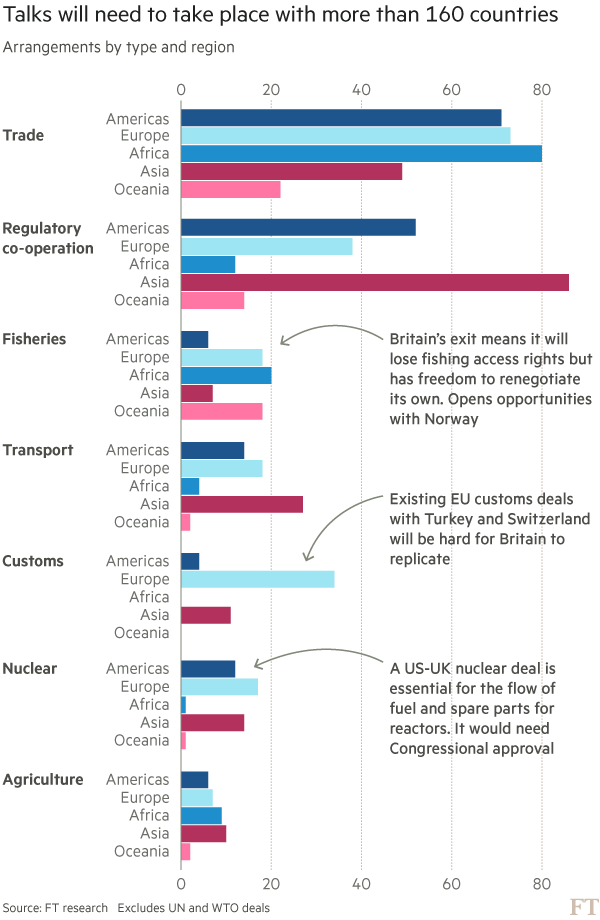 Some of the 759 are so essential that it would be unthinkable to operate without them. Air services agreements allow British aeroplanes to land in America, Canada or Israel; nuclear accords permit the trade in spare parts and fuel for Britain’s power stations. Both these sectors are excluded from trade negotiations and must be addressed separately….

“The logistics are terrifying, even just to go through these commitments and treaties and scope them out,” says Hosuk Lee-Makiyama, a former trade official for Sweden and the EU now at the European Centre for International Political Economy. “Do you want revisions? Do they? Do you go there? How many visits to Chile will this take? That’s a massive logistical operation in itself.

Everyone with an operating brain cell will use this opportunity against the UK. The UK’s failure to understand what Brexit means in practice and make adequate preparations means it has given the countries that are parties to these pacts a free option: you can fudge and honor the current terms with the EU, or you can do what you really should do, which is insist on a new agreement and use Brexit as an opportunity to demand better.

So where might countries leave the present arrangements in place? Where they work to their advantage and they deem it to be too much trouble to fuss. But any government worried about having its position covered in the relevant be clear and properly protected will likely want a new agreement and pretty pronto, just as a matter of good order.

And so merely because they are going to have to go to the trouble of papering up new treaties, most countries will probably seek to improve terms, particularly since the UK will be overwhelmed and not in a position to argue. And those other countries will be even more motivated if they think they are getting the short end of the stick or deem it worth the trouble to take advantage of the UK’s desperate position and demand more, they will.

As the Financial Times noted last May:

“There will be a lot of countries with a beef with the EU or the UK and will see this as a golden opportunity to bring up a nuisance issue. They might not get anything, but they have to try,” he [Hosuk Lee-Makiyama] adds. “There will probably be an accident in areas you cannot predict.”

And in the Financial Times’ account on this mess today, readers offered other reasons why some nations would be keen to sport with the Brits. For instance, from Felix Drost:

Who expects countries like China and India, that have humiliation by Britain on their national curriculum still, to be more generous to Britain than to the EU, the largest single market?

The Financial Times got its digs in on this sorry situation in its headline, Britain to world: please pretend we are not leaving EU, and was if anything understated in the article proper:

Sam Lowe, a research fellow at the Centre for European Reform, said the move marked a U-turn from previous British policy to renegotiate UK-only versions of the deals.

“It is not great for our credibility as a reliable negotiation partner,” he tweeted.

Michel Barnier, the EU’s chief Brexit negotiator, warned last month that there was no guarantee that the UK would be able to continue benefiting from the agreements once it left the EU. He said that was something in the gift of the 100-plus countries with whom Brussels had negotiated the agreements.

“Our partners around the world may have their own views on this,” he said.

As Lambert put it, “The UK seems to think the rest of the world operates like one of their stupid Westminster private clubs.” They are going to get a rude awakening.

1 No, sports fans, the full text does not give the UK any more reason to be hopeful:

1. A treaty shall be interpreted in good faith in accordance with the ordinary meaning to be given to the terms of the treaty in their context and in the light of its object and purpose.

2. The context for the purpose of the interpretation of a treaty shall comprise, in addition to the text, including its preamble and annexes:

(a) Any agreement relating to the treaty which was made between all the parties in connexion with the conclusion of the treaty;

(b) Any instrument which was made by one or more parties in connexion with the conclusion of the treaty and accepted by the other parties as an instrument related to the treaty.

3. There shall be taken into account, together with the context:

(a) Any subsequent agreement between the parties regarding the interpretation of the treaty or the application of its provisions;

(b) Any subsequent practice in the application of the treaty which establishes the agreement of the parties regarding its interpretation;

(c) Any relevant rules of international law applicable in the relations between the parties.

4. A special meaning shall be given to a term if it is established that the parties so intended.