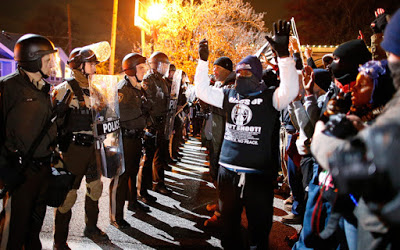 Hands up, don’t shoot” — this is one form of defiance against police at the Ferguson protests. It’s only in the context of state-sanctioned murder that a symbolic act of surrender can be taken as defiance (source).

The Blue Lives Matter movement is a political counterattack against the Black Lives Matter movement. It doesn’t include the concept that black lives also matter (notice the catch phrase isn’t “blue lives matter too”), but enshrines a defiant, contrary opinion thinly disguised in a superficially innocuous phrase. In the same way, “America First” or “Make America Great Again” is a thinly disguised, pretend-innocuous phrase that delivers a defiant and contrary message, in this case against ideas like “immigrants have human rights.”

“Blue lives matter” conceals its hatred beneath its language — barely conceals — but conceals it cleverly enough that arguments based on words alone lead nowhere. In many respects the “blue lives matter” slogan is like the American Flag when worn by cops but not nurses — an innocent-looking symbol with an angry, defiant, threatening meaning that’s been widely understood since hippie days.

This Wednesday, with little attention, the House of Representative just passed the “Protect and Serve Act of 2018”sponsored by Representative John H. Rutherford (R-FL). The bill would make it a federal crime, punishable by up to 10 years in prison, for “knowingly causing serious bodily injury to a law enforcement officer, or attempts to do so.” It joins a host of others deemed “Blue Lives Matter” laws, which have been introduced and passed, in part as a reaction to rising defiance to documented brutality and racism practiced by law enforcement in this county.

This act encapsulates the essence of the “blue lives matter” movement. Why? Because cops lie when they commit their own violence, and resistance of any kind to police violence frequently spurs more police violence. Wright again:

Let us be clear: police departments across the country have justified brutality and murder by accusing their victims of assault, for actions as heinous as dodging a night stick or pushing back on a barricade that is crushing against a crowd. And we don’t need body cameras to know that law enforcement officials are not always honest about their actions that result in arrests and lethal force — assuming the cameras aren’t turned off as was the case with Stephon Clark in Sacramento. Cops in the U.S. already have more of a License to Kill than James Bond, and in many cases enjoy more impunity that he does (Bond at least, at times, faces some scrutiny from M for his actions.)

And now there’s a federal law that can be added to the crimes laid against victims of police violence, thanks to Raúl Grijalva, Keith Ellison, Ro Khanna and others who supposedly, publicly “stand with the people.” Shameful.

By the way, don’t fail to note the irony in the name of the act. Whom does the law “protect and serve”? The police, of course, in a perfect inversion of the phrase’s usual meaning.

The Violence of the State and Non-Violent Protest

It’s not just at Black Lives Matter marches and protests that police violence occurs. And it’s not just people of color who experience it. Police are also front-line enforcers of many types of Establishment control (how often have you seen political protests treated as crimes against the state?), and police and military violence is frequently directed against anyone who opposes state violence. 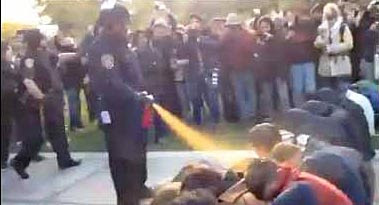 Pepper spray directed by police into the eyes of seated non-violent pro-Occupy protesters at UC Davis, punishment for the crime of opposing state-sanctioned rule by bankers

Consider Chelsea Manning and her years of torture for the crime of revealing crimes by the state, including, appropriately, torture and murder.

Or consider the police treatment of ex-CIA officer and Ray McGovernshown in the hard-to-watch video below, a 78-year-old retired national security officer abused for the crime of protesting the confirmation of CIA torturer Gina Haspel as, again appropriately, the next head of the CIA.

This is the direct violence of the state as executed by police and the military. The violence of the state comes from many other people in many other forms as well, including the building of pipelines that carry poisonous liquids and gases across land and water owned by those who oppose it. Those who resist these forms of indirect state violence, even passively and non-violently, are often treated with direct violence in response. This new law affirms the state’s defense of its violence. And it will certainly be broadly applied.

Note also, as Rogers-Wright points out, that this creates a federalcrime under interstate law:

For purposes of subsection (a), the circumstances described in this subparagraph are that —

(1) the conduct described in subsection (a) occurs during the course of, or as the result of, the travel of the defendant or the victim —

(A) across a State line or national border; or

(B) using a channel, facility, or instrumentality of interstate or foreign commerce;

(2) the defendant uses a channel, facility, or instrumentality of interstate or foreign commerce in connection with the conduct described in subsection (a); 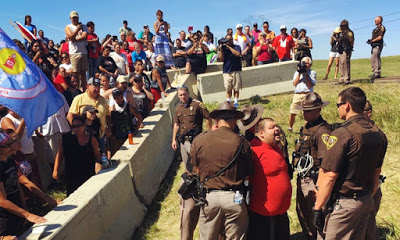 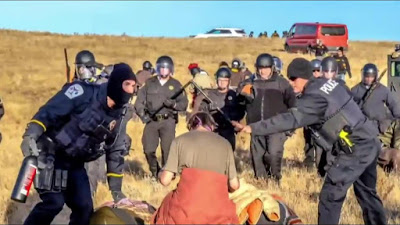 And dare to resist, as Ray McGovern “resisted” in the video above?

Messrs. Grijalva, Ellison, O’Rourke, Khanna: You will have much to answer for as this unfolds.

A Note About Police Murder and the Gun Lobby

An full examination of the relationship of ideas between these elements — the NRA; public support for whites with guns; and police execution of blacks without guns — would be fascinating and productive.

The segment of society that loves guns and the NRA also loves whites who carry guns, yet fears with a passion blacks and those in the restless underclass who do the same. This is more than reminiscent of the pre-Civil War South and its roving gangs of escaped-slave hunters, aka Second Amendment–protected “state militias,” whose job was to make sure any slave thinking of escape — or worse, of armed rebellion — is quickly reminded that those thoughts lead to death.

My own thoughts: Worshipers of guns and worshipers of violence by the state have much in common. Also, America’s slave-punishing past is still with us, but with a greatly expanded list of victims.

I’ve been saying that the nation is in a pre-revolutionary state and predicting a “rolling civil war.” I’ve called it that, a civil war, for a reason. This piece explains that reason.