Readers, here is the latest iteration of my “Table 1” for the 2018 primaries. The structure is the same as the last iteration on “the Wave” and the DCCC. The enormous Pennsylvania primary is tomorrow — all those new districts! — but fortunately this is not a horse-race series, so I don’t have to write up any predictions! I did recheck the candidates backed by the DCCC, and made some other changes in detail (mostly who backs real versions of Medicare for All, and who backs faux versions; thanks to readers for some clarifications). Herewith the table, which gives us one important result.

Using the horserace predictions from the handicappers at Inside Elections (May 8), we come up with the following changes from our post of two weeks ago:

Two weeks ago, only one district (MN-07), had changed from Lean-D to Likely-D. Now an additional six have shifted in the same direction (although, oddly, none from Pennsylvania, and none from California). Although only two have shifted from Toss-Up to Tilt-D, all are moving in the same direction. For a Democrat loyalist, as well as anybody who wants to see divided government return to Washington, that’s good news.

As readers know, I simplify the political world by dividing it into conservatives, liberals, and the left, where liberals and conservatives put markets first, and the left does not (pause for outraged cries from various left groupuscles who deplore being grouped). The liberals who currently dominate the Democrat Party would prefer to “convert” or peel off conservatives (Exhibit A: The rehabilitation of George W. Bush, and other Republican worthies) rather than appeal to the left, let alone expand their base by moving the entire party left and offering universal concrete material benefits to voters. Unfortunately, from the standpoint of the left, liberal Democrats reacted to the results of election 2016 by purging the left from the DNC and from the important rules and bylaws committee, and the DCCC has decided on a straight replay of the squandered 2006 “wave” election by betting on Blue Dogs, identity politics, and big bucks. Down With Tyranny describes the issues well for California Assembly District 15:

Buffy Wicks is the only candidate in the AD15 race who opposed Bernie Sanders in the 2016 Presidential primary. While largely tailoring her platform to the district, she remains visibly the furthest ‘Right’ on charter schools (whose promoters are among her donors) and tenants’ rights. Buffy, who describes herself as a “community organizer,” headed Hillary’s California 2016 primary campaign, after heading a pro-Hillary Super PAC, after playing significant roles in Obama’s 2008 and 2012 campaigns’ fundraising, and heading the Obama Administration’s Office of Public Engagement– during the notorious post-election demobilization of grassroots participation in Obama For America.

Buffy’s many prominent endorsers include California Secretary of State Alex Padilla, who (in between campaigning alongside Hillary) presided over the 2016 Presidential primary, including incorrect instructions to voters and poll workers, and alleged ballot-tampering, which suppressed votes for Bernie

Massive fundraising by Buffy includes donations from mega-donor and Commerce Secretary Penny Pritzker (whose brother spent $70 million to secure this year’s Democratic nomination for Governor of Illinois), and from senior personnel in the offices of Rahm Emanuel and Cory Booker. It was leaked, and then acknowledged, that Buffy poll-tested the resonance not only of her own potential positions, but also attack lines against four other candidates. Buffy has access to virtually unlimited funds in order to carpet-bomb the district with expensively tailored positive and negative messaging.

This race is testing a new local election model: retooling a fundraising operative into a fake Progressive candidate (aided by a track record free of previous positions on policy), to carpet bomb a Progressive and highly educated district with a carpetbag full of money and celebrity endorsements. If this succeeds, it will be repeated everywhere because, if they can fake it here, they can fake it anywhere.

Holy moly, a “community organizer” with “virtually unlimited funds” [puts head in hands]. As readers know, I’ve been casting about in my mind for ways make the Democrat Party, as presently constituted, go the way of the Whigs (who split on slavery, as did the earlier incarnation of the Democrats). Through the various iterations of Table I, I’ve sought fracture points, especially along occupational lines (MILO in Table I) and policy lines (especially Medicare for All), but without what I consider real analytical success. However, reading about the horrid Buffy, it occurs to me that the real power of the Sanders campaign was not policy — important as #MedicareForAll is, and no matter how much we all love to talk about policy — but the Sanders $27-dollar donor model, which oddly, or not, seems to have completely disappeared from political discourse. (I’d go so far along the purity scale as to suggest that even donations from unions be rejected; they need the money for organizing the workplace in any case, which is what they ought to be doing). R. J. Eskow writes:

A truly clear-eyed assessment of the Democratic Party’s recent record would show that, under its current leaders, the party lost both houses of Congress and roughly 1,000 seats in state legislatures during the Obama years. The fact that the electoral tide seems to have shifted this year says little about their leadership. The shift is largely due to the party base’s understandable horror at Trump’s leadership.

In a 2013 PowerPoint slide, the DCCC famously told freshmen Democrats in Congress that they should plan on spending four hours a day raising money [my emphasis] for their re-election campaigns.

The party is using its candidates to feed an infrastructure of consultants that reinforce the need to raise copious amounts of cash. In a leaked Memorandum of Understanding (MOU) between the DCCC and its candidates, the party organization insists on overseeing budgets and campaign finance plans. The MOU also requires candidates to reserve “at least 75 percent of funds raised for paid communications.”

This enriches a certain type of Democratic consultant. It also precludes candidates from embracing the ground-based, movement-aligned strategies that could help increase voter turnout and win races previously thought unwinnable. It prevents the development of lower-cost alternatives to the kinds of campaigns that force politicians to spend hours every day raising money.

My thought, then, is that every insurgent — especially those who have adopted the Sanders $27-dollar model; surely there are some? — who faces a DCCC-backed candidate should be asking that candidate some very pointed questions about how they use their time, time being money. Here’s a handy list from the DCCC’s Red-to-Blue program: 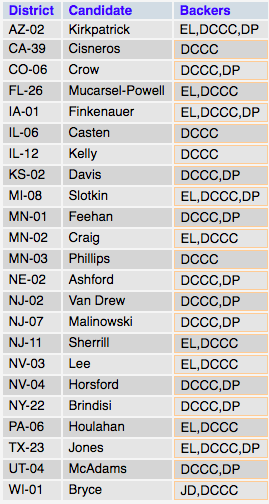 1) “Do you plan to spend four hours a day, every day, on the phone raising money? And a follow-up: Do you think that’s the best use of your time?”

2) “What do you think your contributors are buying with their contributions?”

3) “Wouldn’t it be better if all political campaigns were funded by people, and only by people, who can only afford to pay $27? Sanders proved it can be done, so why aren’t you doing it?”

And other questions like that. Over and over and over. Not one of many things; the thing. It seems that policy-based approaches have, at best, left the Democrat Establishment with flesh wounds. (“Look! Over there! Medicare Extra!”) Maybe following the money will fracture some bone. As Admiral Horatio Nelson (apocryphally) said: “Never mind the maneuvers. just go straight at ’em.”