Jimmy Dore highlights and discusses Bernie Sanders’ recent foreign policy statement. Portions of Sanders’ speech are discussed below, but the entire video is worth watching.

Is anti-war fever building in the U.S.? One would not think so given all the signs — apparent public apathy toward multiple military involvements, happy compliance with “security” at the increasingly painful airport, lack of protests and so on.

Yet there are two signs I’d like to put forward as indicating a growing willingness to forgo foreign “entanglements” (undeclared wars), springing either from a weariness with them, a nascent abhorrence of them, or a desire to focus U.S. dollars on U.S. domestic solutions, like the hugely popular Medicare for All. (Click to see just how popular Medicare for All, called “Medicare Buy-In” at the link, is across party lines.)

• The first sign is Bernie Sanders, the most popular politician in America and by far its most popular senator, making statements like these in the speech linked and discussed in the video at the top of this piece. For example, at 9:00 in the clip, Sanders says (emphasis his):

SANDERS: In other words, what we have seen in time and time again, disasters occur when administrations, Democrat and Republican, mislead Congress and the American people. And when Congress fails to do its constitutional job in terms of asking the questions of whether or not we should be in a war. And I think we need to ask that very hard question today.

And here is the point that I hope the American people are asking themselves. Is the war on terror, a perpetual, never-ending war, necessary to keep us safe?

I personally believe we have become far too comfortable with the United States engaging in military interventions all over the world. … We have now been in Afghanistan for 17 years. We have been in Iraq for 15 years. We are occupying a portion of Syria, and this administration has indicated that it may broaden that mission even more.

We are waging a secretive drone war in at least five countries. Our forces, right now, as we speak, are supporting a Saudi-led war in Yemen which has killed thousands of civilians and has created the worst humanitarian crisis on the planet today.

Talk like this is anathema in our militarized state, comments usually relegated to the fringes of public discourse. For Sanders to say this (and similarly anathemic remarks elsewhere in the speech) certainly denotes a shift, especially since Sanders during the campaign was not considered strong on foreign policy, especially progressive (non-orthodox) foreign policy.

As Jimmy Dore said in reply to the last sentence quoted above, “It’s not Syria? Can you [say] “stop the butcher” is the worst? No. Turns out what we’re doing is the ‘worst humanitarian crisis in the world today,’ committing siege warfare in Yemen, which … is a war crime. And we’re doing it, with Saudi Arabia.”

Sanders also says we’re “fighting terror” in 76 countries. Let that sink in, as Sanders wishes it to — we’re engaged in military conflict in 76 countries, almost a third of the nations in the world. I’m not sure many in the lay public appreciate the importance, or the likely consequences, of that surprising fact. (For one example of those consequences, consider that foreign wars often come home.)

Elsewhere in the video Dore asks, “Do you see Chuck Shumer saying our wars have had ‘dire consequences’?” Sanders, it seems to me, is launching a toe-to-toe battle with what right-wingers have lately been calling the American “deep state” and I’ve been calling the security establishment.

• The second sign comes from Donald Trump during the campaign. This isn’t just Sanders going out on a limb — taking a flier, as it were — on a deeply unpopular position. Consider how often Donald Trump, the campaign version, made similar statements:


He also famously said this about NATO and its mission:

What I’m saying is NATO is obsolete. NATO is — is obsolete and it’s extremely expensive for the United States, disproportionately so. And we should readjust NATO.

If the U.S. security establishment is working to get rid of Trump, to take him out by whatever means necessary, campaign statements like that would be one of many reasons.

If Americans Could Vote Against the Forever War, Would They Do It?

I recently noted how different the outcomes are when the public indicates policy preferences with their votes versus polling data. DC politicians of both parties ignore polling with impunity. Votes, on the other hand, especially in party primaries, can force change — witness the Trump nomination and the Sanders (stolen) near-nomination.

In some ways, small but not insignificant, the 2016 election was a test of the anti-war waters, with Trump asking questions about the need and mission of NATO, for example, that haven’t been asked in over a generation, and Clinton, the proud choice of the neocon left and right, in strong disagreement.

It’s too much or too early to say that Trump’s public pullback from U.S. hegemony helped his election, though that’s entirely possible. But it’s certainly true that his anti-Forever War sentiments did not hurt him in any noticeable way. 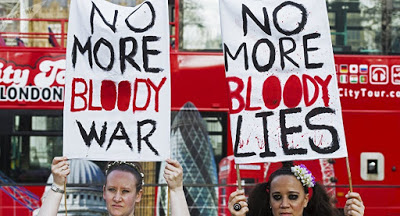