Why Scientists Are Upset About A Dinosaur Fossil’s Sale – And $2.4 Million Price Tag NDTV (Kevin W)

NASA rover data shows Mars had ingredients needed for life Reuters (furzy). As if we need to give Elon Musk more encouragement.

About that tritiated water: Who will decide and when? Japan Times (David L)

A better way to repel China in the South China Sea Asia Times. Kevin W: “This man’s solution is to actually start a shooting war with China. (bangs head repeatedly on desk).”

India Advances Ill-Conceived Plan to Project Military and Economic Power into the Seas Alternet. Curious to get reader reactions.

Trump-Kim summit: North Korea leader may get US invite BBC

Brexit: what is the UK’s backstop proposal? Guardian. Even the Guardian says it’s silly. You can see so for yourself: TECHNICAL NOTE: TEMPORARY CUSTOMS ARRANGEMENT HM Government. Even a not-very-clued-in reader can see it’s a handwave. And if you understand that a customs union does not produce a frictionless border, it’s even more frustrating to read.

Brexit referendum on final deal possible, Foreign Office minister says Independent (Kevin W). This is silly too since there isn’t remotely enough time for another referendum.

Is Brexit going as well as you thought it would? YouGov

Difficult to see how UK proposal on customs aspects of IE/NI backstop will deliver a workable solution to avoid a hard border & respect integrity of the SM/CU. A backstop that is temporary is not a backstop, unless the definitive arrangement is the same as the backstop. #Brexit

12,500 TSB customers leave after IT meltdown Sky News. Number seems low but other reports have described how TSB has made it hard to leave. Clive points out:

Clever use of tense “have left” — says nothing about the pipeline (how many customers have begun the switching process but this is still to complete — it takes 7 to 10 days once initiated). Plus you need a good credit score to open anything other than a very basic bank account. If you’ve got an overdraft you want to transfer to another bank (which you can’t afford to clear first) and poor credit, you’re stuck at TSB.

U.S.-Saudi Pressure On Jordan Opens The Way For Iran Moon of Alabama

Be Very Afraid: Israeli forces Are Training American Police Mint Press (Judy B). Not exactly news. Bloomberg bragged about how the NYPD was the seventh biggest army in the world and was getting advice from Israel.

Up to 14m Facebook users may have unknowingly posted private information to the public Abc.net.au (Kevin W)

Please tell Prime Minister Trudeau and President Macron that they are charging the U.S. massive tariffs and create non-monetary barriers. The EU trade surplus with the U.S. is $151 Billion, and Canada keeps our farmers and others out. Look forward to seeing them tomorrow.

The 2 words you can’t say in a Democratic ad: ‘Single payer’ Politico. Important.

Pelosi: ‘Medicare for All’ should be ‘evaluated’ if Dems win House The Hill (furzy). Translation: “We’ll need to find better excuses for not doing it.”

Texas Student, Mother Detained for Waving to Each Other During Graduation Sputnik

To follow up on the story of the cat with the winning attitude that we ran into during our evening walk.

At first we suspected it might be pregnant. Nope, it’s simply a tom cat who is well fed. It has a loyal following of around a half a dozen local residents who supply food at various points during the day (e.g. four meals a day plus midnight snack). Hence the name “Biggie Mayor.” At the suggestion of the animal control folks, someone went to a vet’s office nearby and discovered that there was already a file created for the friendly feline. The stated owner on file is missing in action.

Somehow the cat wandered over to our neck of the woods and decided he liked it. Definitely an indoor cat given his gentle demeanor. With one major exception, despite having eye problems the cat refuses to be placed in a box or in a car. Preferring the freedom of the great outdoors to even the hint of confinement. Hence making it difficult to deliver eye drops or other medicine. This cat can smell a set-up a mile away and immediately heads for the border.

One local nailed his medical records to a nearby fence. Biggie Mayor has been sleeping rough for over a decade. Good think he’s plump and furry, it’s been getting cold and windy during the evenings. Some nights I jog by and he’s taking shelter under a the warm engine of an SUV. We’ve tried to supply him with padded shelter material but this cat is stuck in his ways.

Note the holder attached to the fence, it contains Biggie’s medical history as various samaritans have gotten shots and delivered meds. It looks like someone is trying to habituate Biggie to a pet container so he doesn’t flee the next time they try to take him for a checkup. 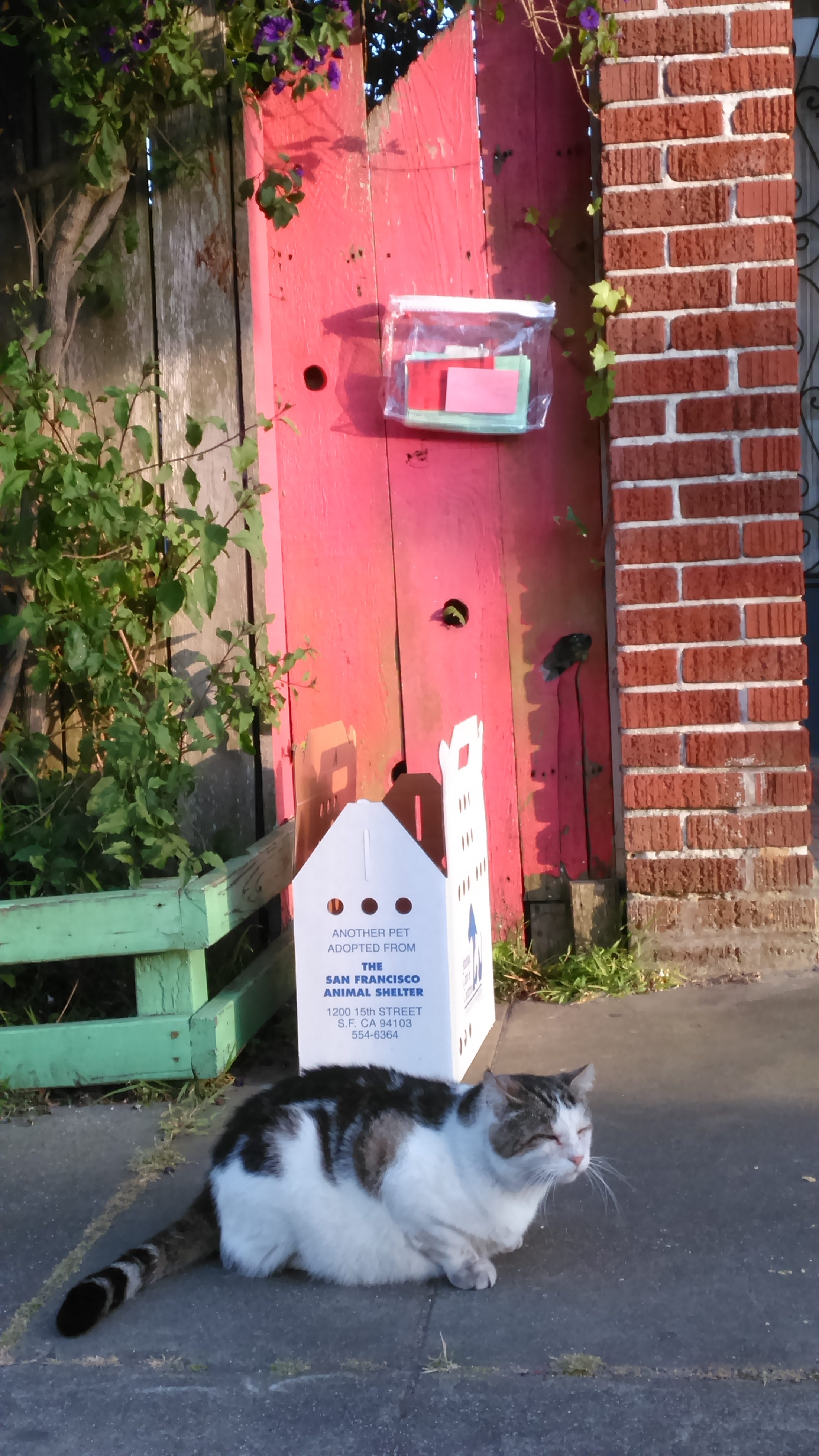