Worried about an economic slowdown amid worsening trade relations with the U.S. and a credit crisis sparked by a massive deleveraging drive, China’s central bank, the People’s Bank of China (PBOC), has unexpectedly made a massive 502 billion yuan ($74.36 billion) available to commercial banks in the form of one-year medium-term lending facility (MLF).

The money is meant to encourage more bank lending after a multi-year campaign by the Beijing government to curb debt started causing serious shockwaves in financial markets. A record numbers of companies ended up defaulting on their debt obligations in the current year.

The central bank is gradually adopting looser monetary policies to alleviate the effects of a huge deleveraging drive that include a worrying economic slowdown, with the economy projected to expand at 6.5 percent in the current year after growing 6.9 percent in 2017.

The latest move by the PBOC came as a surprise to many because no MLFs were due to mature on Monday. The bank typically injects fresh liquidity into the banks on the day existing loans mature.

Interestingly, the one-year MLF remained pegged at 3.30 percent, unchanged from the previous MLF injection—a clear sign that the central bank wants to encourage companies to borrow more. The $74B figure is the most by the bank since MLF was launched four years ago.

It’s now clear that the central bank is moving towards monetary easing from a more neutral stance.

The latest twist comes hot on the heels of reports that the bank had on Friday asked lenders to invest in more lower-grade corporate bonds in a bid to support the $15-trillion asset industry.

The PBOC has in recent months focused on adding liquidity in a targeted fashion in a bid to alleviate funding pressures especially in the private sector, where companies have traditionally faced considerable obstacles trying to obtain credit. The bank has so far cut reserve requirements for banks three times this year.

Chinese companies are going through one of their worst years in recent times, with the number of companies that have defaulted on bond repayments reaching record levels.

By the end of June, companies had failed to honor 33.3 billion yuan ($4.9 billion) in bond repayments, surpassing the previous record of 30 billion yuan set in 2016 for the entire year. But the biggest blow struck early this month when coal miner Wintime Energy defaulted on local bonds worth 72.2 billion yuan ($10.8 billion), a record for the country.

A severe credit crunch can certainly put the skids on the economy.

The Beijing government has largely adopted a hands-off approach as far as managing the country’s fiscal policy is concerned. But China’s State Council, the supreme organ of state administration, has pledged to be more proactive in determining fiscal policy going forward. The government seems keen on reactivating its old engine of growth by accepting more leverage.

While that may impact credit risk due to the current high levels of indebtedness by the nation, Morgan Stanley says there’s no immediate risk due to the government’s financial and capital account controls.

Still, PBOC will do well to steer clear off any dubious tinkering with the yuan.

The currency recently weakened to a one-year low, prompting Treasury secretary Steve Mnuchin to warn that the yuan will be assessed for signs of manipulation during the Treasury’s upcoming semiannual report on currency manipulation in October.

Meanwhile, Hussein Sayed, chief market strategist at FXTM, says that the yuan’s seemingly imminent breaking of the psychologically important 7-mark to the dollar is likely to trigger a round of panic selling in emerging markets equities and debt. The USD/CNY pair is currently changing hands at 6.79 and still climbing. 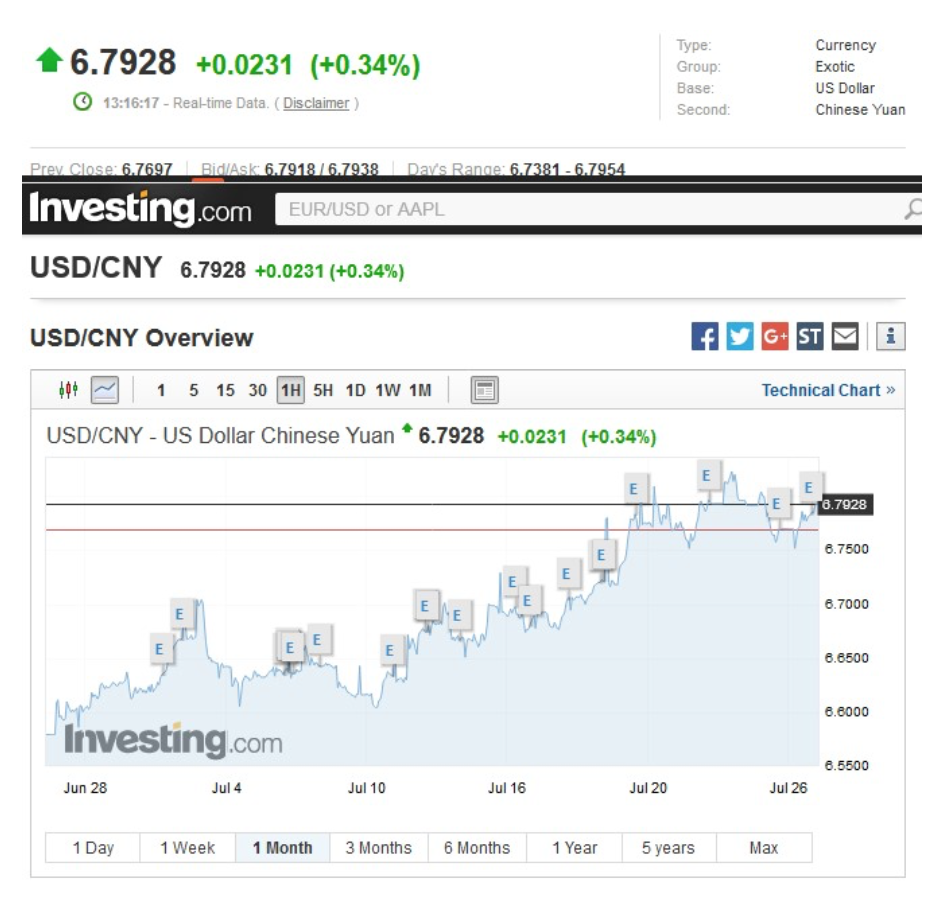