Readers, this is a genuinely open thread; I had to finish my post on the Times, which made me so angry I could hardly think straight. And then I must go run errands, and so this will remain short. –lambert UPDATE Since today’s errands were a debacle, tomorrow’s Water Cooler will be thin, too. Sorry!

Today’s big story is Andrew Gillum’s come from behind victory in the Democrat gubernatorial primary in Florida. The Times:

Mr. Gillum’s upset victory mirrors neighboring Georgia, where Stacey Abrams defied expectations by easily securing the Democratic nomination in a bid to become the nation’s first black female governor. The November governor’s race in Florida will pit Mr. Gillum, who campaigned for Hillary Clinton in 2016 and with Bernie Sanders this month, against Representative Ron DeSantis, who dominated the Republican primary by embracing the policies and style of President Trump.

Gillum does promise to “fight for” “Senator Sanders’ Medicare for All plan,” which is good. And I prefer Gillum to the hackish and dynastic Gwen Graham, and the squillionaire running, too. However, this concerns me. From Politico:

Gillum lacked the resources of his primary opponents, which also included former Miami Beach Mayor Philip Levine and Palm Beach billionaire Jeff Greene, both of whom used tens of millions of dollars of their personal wealth to fuel their campaigns. Gillum often quipped that he was the only person in the Democratic primary who was not a millionaire.

But he has consistently been the most charismatic and dynamic speaker in the Democratic primary. He captured the hearts of grassroots activists, young people and voters of color, but his campaign was also buoyed by national Democratic donors like Tom Steyer and George Soros. Those two and entities directly tied to them accounted for nearly half of the $4.3 million Gillum raised through his political community.

Ugh. I don’t like campaigns that “capture the hearts of grassroots activists” (whatever that means, and whoever they are) and are at the same time funded by squillionaires. With enough funding, you can simulate anything, even (given a compliant press) a grassroots campaign. (Well, Clinton couldn’t, but her campaign was a thousand-year-flood of incompetence and malign neglect.)

Off to run errands. Talk amongst yourselves.

Readers, feel free to contact me at lambert [UNDERSCORE] strether [DOT] corrente [AT] yahoo [DOT] com, with (a) links, and even better (b) sources I should curate regularly, (c) how to send me a check if you are allergic to PayPal, and (d) to find out how to send me images of plants. Vegetables are fine! Fungi are deemed to be honorary plants! If you want your handle to appear as a credit, please place it at the start of your mail in parentheses: (thus). Otherwise, I will anonymize by using your initials. See the previous Water Cooler (with plant) here. Today’s plant (Timotheus): 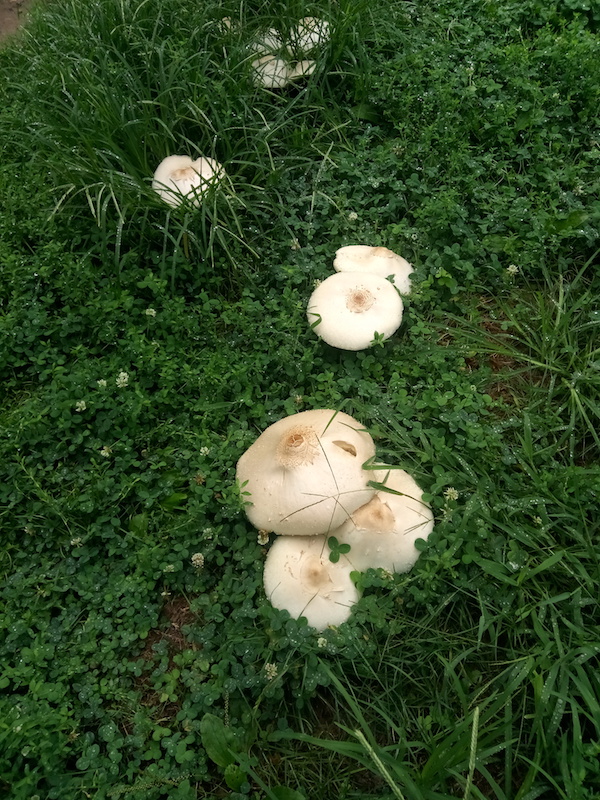 Timotheus writes: “Heavy and constant rains have led to the appearance of these giant fungi in our local park.”