On June 23, 2016, the British public voted by a 52-48 percent margin for the United Kingdom to leave its membership of the European Union. A popular view is that British citizens favored Brexit because they were swayed by misplaced nationalism and base xenophobia. Most academicstudies, however, find that the Brexit vote reflected economic grievances: economically distressed regions had higher “Leave” shares; and people under financial stress were more likely to vote for Brexit. Recent research shows that people who are economically marginalized and see their social standing slipping away are likely to identify themselves with nationalistic and xenophobic ideas and seek solutions for their grievances outside of the political mainstream.

In this article, we pinpoint the source of voter economic anxiety during Brexit: the shrinking opportunity for upward intergenerational economic mobility. Many parents who voted to leave had good reason to fear that their adverse economic conditions would also severely handicap their children. Many children were also influenced by their lack of economic opportunities. They did not vote to leave, but rather, did not vote at all, a decision that turned out to be an important cause of the Brexit outcome.

Many observers have noted that young British voters chose “Remain” more heavily than older citizens. The inference such observers draw is that if more young people had voted instead of staying home, “Remain” would have prevailed. We find that the decision by the young to abstain, just as much as the decision by older citizens to “Leave,” was an expression of political alienation driven by economic pessimism.

Our findings emphasize that lack of upward mobility is more powerful than mere inequality in inducing deep economic grievances. Wealth and status are inevitably distributed unevenly across a population. But parents and children are doubly aggrieved if economic deprivation is handed down from one generation to another. We find that income redistribution is inadequate to overcome the pessimism caused by inadequate opportunities for improving earnings prospects.

A Rust-Belt Trap on Parents, and an Urban Trap on Children

Children’s prospects for upward mobility are determined by the educational and labor market experiences bequeathed to them by their parents. Or, as Stanford University’s Raj Chetty, the preeminent scholar of intergenerational mobility, puts it, children’s success depends on the ‘opportunity’ to which they are exposed. Several studies, including one of ours, confirm that children who have higher-income and higher-professional-status parents start life with superior education and work experience (Lurie 2018).[1]Such children, unsurprisingly, succeed in climbing up the income ladder. Those who are brought up in better neighborhoods gain a further advantage.

Following Lurie, we analyze the value to children of parental and neighborhood advantages. We obtained data on individual characteristics from longitudinal survey data from the British Household Panel Survey (BHPS) and the Understanding Society UK Household Longitudinal Survey (UKHLS) spanning the years 1991 to 2015 (Figure I). To study neighborhood effects, we consider several regional characteristics from the 2001 British census data. Since regional characteristics are highly correlated, we use principal components analysis to identify two distinct groupings. One of these groupings, the “rust-belt,” features low college achievement, significant geographical isolation (commuting distances of individuals in the region are relatively short), and a large share of employment in manufacturing. Rust-belt areas do not have especially high unemployment rates; rather, the high reliance on manufacturing indicates a prevalence of low-paying and insecure jobs. These are areas, in former prime minister Gordon Brown’s words, where British manufacturing, unable to face Asian competition, has “collapsed,” and industrial towns have “hollowed out,” leaving semiskilled workers “on the wrong side of globalisation”. A second grouping suffers from “urban dysfunctions” such as high secondary school dropout rates, high unemployment, extreme geographical isolation, and broken families. Such areas have limited manufacturing activity. 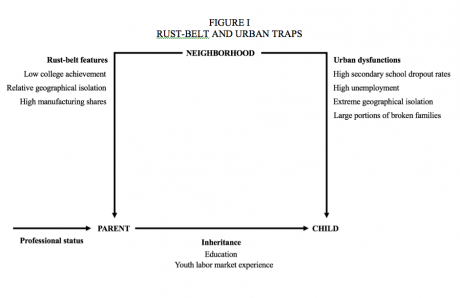 Parents’ incomes not only are constrained by low professional status, but also are held down if they live in dominantly rust-belt areas. And children of low-income parents tend to be inadequately educated and scarred by youth unemployment, which limits their ability to move up the income ladder. Moreover, children earn less if they live in areas of high urban dysfunctions. Thus, the most disadvantaged children are those who, having been born to rust-belt parents, have moved to live and seek work in run-down urban areas.

We find that the regional features that restrict upward mobility were influential in the vote for Brexit and in the decision to abstain.

Rust-belt features and urban dysfunctions persisted from 2001 through 2011. Thus, on the reasonable assumption that these features persisted into 2016, people’s experiences of regional income traps had endured well over a decade by the time of the Brexit vote.

As shown in Figure II, regions with greater rust-belt features had distinctly higher shares of people voting “Leave.” Those who voted “Leave” suffered not only from their own economic anxiety but also from the fear that their children would face poor economic prospects. They attributed these woes to a hyper-globalization amplified by the European Union.

In heavily rust-belt areas such as the West Midlands and the North East, voters suffered from a deep senseof economic frustrationand regretover the loss of industrial jobs. As others have noted, the “Leave” campaign encouraged voters to blame their hardships on the European Union and on the London-based political establishment. 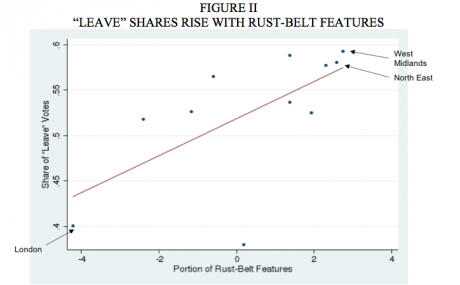 One theme of our findings is that while lack of upward mobility emphatically influenced the Brexit outcome, inequality played a more limited role in voters’ decisions. If anything, “Leave” shares were smaller in areas of high regional inequality: this is true for “market”-generated inequality and even more so for inequality after fiscal redistribution (Figure III). Thus, voters appear to have been moved not by their own relative deprivation, but rather, by the sense that even after receiving fiscal support to ease their daily lives, they could not give their children a chance of moving up in life. Voterturnout data showsthat low-income youth drove low turnout rates: the lowest turnout rates nationally were among those aged 18-34, and among young people, those who were low-income voted the least. Such non-voters lived in dysfunctional urban areas, dealing with spells of unemployment and bleak prospects of making progress. For example, in Greater London, voter turnout was 79 percent in the affluent Kingston upon Thames borough, but only 65 percent in Hackney, where large pocketsof deep poverty and alienation persist. If Greater London’s turnout rate had been materially higher and its “Leave” share had stayed unchanged, the referendum result would almost certainly have been to “Remain.”

Many have portrayed the Brexit vote as reflectinga “generational divide”: the young voted to Remain while older citizens voted to Leave. But this misses the crucial significance of the non-vote. The young living and working in the financial districts of London have little in common with those living in the depressed parts of Hackney. The divide was not across generations but across those who have reason to be optimistic about their futures and those who do not. The non-vote of the young living in the grim areas of Greater London and other similar urban neighborhoods was as much a sign of hopelessness as the exit vote of older rust-belt citizens. Their decision not to vote is a warning that such political detachment could morph into more active protest in the future.

Can Fiscal Redistribution Help After All?

It is the case that areas of high urban dysfunctions also have high market-generated inequality (Figure V). As the London example shows, pockets of extreme poverty and social fracture continue alongside areas of extraordinary wealth. The policy question is whether more aggressive fiscal redistribution to economically depressed urban areas, although too late for the Brexit vote, can help reduce the sense of despair and political alienation in the future. The evidence from the Brexit non-vote is not encouraging. We find that government redistribution was ineffective at alleviating the underlying sources of voter frustration. As shown in Figure VI, while higher market inequality was associated with lower regional voter turnout rates, inequality in disposable income after taxes and transfers bore no relationship to turnout rates. Accordingly, regions with lower inequality in disposable income did not have higher voter turnout. While fiscal redistribution across regions did mitigate market inequality, it did not materially alleviate voters’ sense of frustration in economically and socially left-behind areas, where presumably the government’s safety nets were not enough to significantly raise optimism about the future. Recent studies for the United States describe how as regions fall behind, catching up becomes ever harder. Those who can afford to move from the lagging regions do so. Those who stay behind are left with fewer communal resources and often lower-quality schools, a crucial factor that can limit upward mobility.

Put differently, while redistribution eases the burden of life, it does not, ipso facto, improve opportunities to increase earning potential and move up on the income ladder. Miles Corakreferences a fitting quotation from Brunori, Ferreira, and Peragine:

“[I]nequality of opportunity is the missing link between the concepts of income inequality and social mobility; if higher inequality makes intergenerational mobility more difficult, it is likely because opportunities for economic advancement are more unequally distributed among children.”

Policymakers need to aim for forms of redistribution that improve people’s life chances.

The Urgency of Creating Opportunities

Our findings suggest that improving the prospects of upward mobility must be a multi-pronged policy effort. Regenerating declining manufacturing areas will raise the incomes of those stuck in a low-income status in those communities. Parents in those regions will be able to provide more opportunities to their children. In addition, directly improving children’s prospects of upward mobility will require revitalizing poor urban areas to enhance children’s opportunities upon entering the labor market; such policy initiatives will mitigate the scarring effects of youth unemployment. Crucial also to upward mobility is the availability of quality education. Particularly, low-income families need greater access to education that prepares themfor the future.

Many have criticized the Brexit referendum as undemocratic. Accounting for those who did not vote, less than half of British citizens favored Brexit. Even those who voted for Brexit may have been manipulated by unprincipled politicians and media. Such grumbling misses the point. The referendum gave British citizens an opportunity to pointedly express their pessimism about the future in a way that is not possible in general elections, in which multiple issues and parties compete for votes. In the Brexit referendum, UK citizens were pleading through their vote – and non-vote – for a fair shot at the future. They were calling on British leaders to revitalize decaying industrial areas and bring hope to the failing urban communities in which they were trapped. That plea has unfortunately been lost amid the frenzied debateon Brexit parameters between the UK and European authorities.

The real Brexit message was only peripherally related to Britain’s relationship with the European Union. Rather, the Brexit vote signals the urgency of a task that policymakers have too long neglected: creating more opportunity and instilling a sense of fairness. Prime Minister Theresa May seemed to get it when, at her speech to the Conservative Party in October 2016, she promised “a country that works for all.” But May’s government continued the senseless fiscal austerity of previous Conservative governments. As is well-understood, austerity inflicts the greatest hurt on the most vulnerable. The task ahead is as clear as it is difficult: targeted policy solutions to raise upward mobility are crucial if Great Britain is to begin healing its economic and social divides.