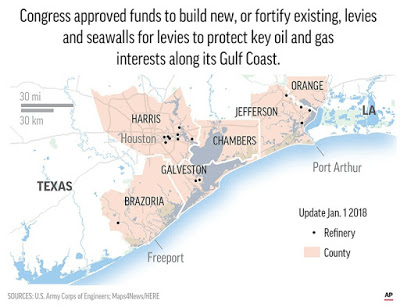 Map from early 2018 showing spending Congress has already approved to protect Big Oil facilities in Texas from superstorms and rising sea levels. What’s mentioned in the article is in addition to all this (source).

In a masterstroke of irony — and hubris — the oil industry wants the federal government to build and pay for “a nearly 60-mile ‘spine’ of concrete seawalls, earthen barriers, floating gates and steel levees on the Texas Gulf Coast” to protect “the crown jewels of the petroleum industry.”

What are those crown jewels? One of the “world’s largest concentrations of petrochemical facilities, including most of Texas’ 30 refineries, which represent 30 percent of the nation’s refining capacity.”

The cost, of course, is in the billions. From the AP:

Texas is seeking at least $12 billion for the full coastal spine, with nearly all of it coming from public funds. Last month, the government fast-tracked an initial $3.9 billion for three separate, smaller storm barrier projects that would specifically protect oil facilities.

That followed Hurricane Harvey, which roared ashore last Aug. 25 and swamped Houston and parts of the coast, temporarily knocking out a quarter of the area’s oil refining capacity and causing average gasoline prices to jump 28 cents a gallon nationwide. Many Republicans argue that the Texas oil projects belong at the top of Washington’s spending list.

“Our overall economy, not only in Texas but in the entire country, is so much at risk from a high storm surge,” said Matt Sebesta, a Republican who as Brazoria County judge oversees a swath of Gulf Coast.

By “overall economy” Sebesta means corporate profits. Even if he talked about “jobs” (he doesn’t), he would still mean corporate profits. The industry doesn’t care at all about the “overall economy.” They only care about their own economy. If industry CEOs could hire Texans to work for a pittance instead of a wage, they would do that. If they could hire Texans to work for nothing instead of a pittance, they would do that too.

The planned infrastructure is quite extensive. Just some of the detail: “While plans are still being finalized, some dirt levees will be raised to about 17 feet high, and 6 miles of 19-foot-tall floodwalls would be built or strengthened around Port Arthur, a Texas-Louisiana border locale of pungent chemical smells and towering knots of steel pipes.”

The stink of the town is obviously due to the massive refinery structures. Note that this federal spending protects the property of non-U.S. companies as well:

The town of 55,000 includes the Saudi-controlled Motiva oil refinery, the nation’s largest, as well as refineries owned by oil giants Valero Energy Corp. and [the French company] Total S.A. There are also almost a dozen petrochemical facilities.

Of course, the entire industry is international with no interest in borders, Russian and Iranian borders excepted. In addition, all oil products are sold on international exchanges to international buyers, so the concepts of “our oil” and “our oil companies” are meaningless. Still, for those still fooled by those concepts, it’s worth pointing out that “their oil companies” will be protected by U.S. federal dollars as well as “ours.”

“Not every property can be protected”

The article notes near the beginning that communities and “delicate ecosystems” will be also protected by this project, but lower down, beyond where most people stop reading, we find this (emphasis added):

The proposals approved for funding originally called for building more protections along larger swaths of the Texas coast, but they were scaled back and now deliberately focus on refineries. …

Oil and chemical companies also pushed for more protection for surrounding communities to shield their workforces, but “not every property can be protected,” said Sheri Willey, deputy chief of project management for the Army Corps of Engineers’ upper Texas district.

“Not every property can be protected” should be emblazoned on t-shirts and coffee mugs and sold in dollar stores everywhere. It will be the one commonality when the full climate crisis hits.

When that day comes, and every day after it, the ultra-rich will use the full resources of government to only protect themselves. Because not every property can be protected.

You read it here first.