By John Weeks, Professor Emeritus, School of Oriental & African Studies, University of London, and author of ‘Economics of the 1%: How mainstream economics serves the rich, obscures reality and distorts policy’, Anthem Press. Originally published at openDemocracy

When we change our perspective on of the nature, size and ownership of the UK public debt we can see that it poses no threat to economic stability. Its size is modest and its burden on taxpayers is minor. If we treat the national debt as an asset, we can use it as a means to end austerity.

Give the Public Debt Some Respect and End Austerity!

The claim that our public debt is excessive has been used as a major justification for austerity – cuts in spending. That massive debt, we are told, 1) must be repaid, 2) threatens our country with bankruptcy, and 3) is a burden on future generations. All these are wrong. Let me explain why.

When our government borrows it does so by selling a promise to pay, called a bond. For example, a household buys a £100 bond and our government promises to buy it back at the same amount in ten years with interest (at present 2.5% or £2.50 every year). A pound note also is a promise to pay (look at the small print near the Queen’s picture). A pound note is a bond paying zero interest.

This buying and selling of public bonds is not the much-misunderstood Quantitative Easing (QE). QE was a one-way street – our government bought private corporate assets from companies threatened with bankruptcy. In a phrase, QE was “bail-outs” of reckless private sector financial behaviour.

The Size of the Public Debt Is Not a Problem

Figure 1 shows that outstanding public bonds (called “gilts” from the days when the edges of the bond had gold gilt) amounted to £1.9 trillion or 96% of GDP at the end of 2016, which was the UK gross debt. 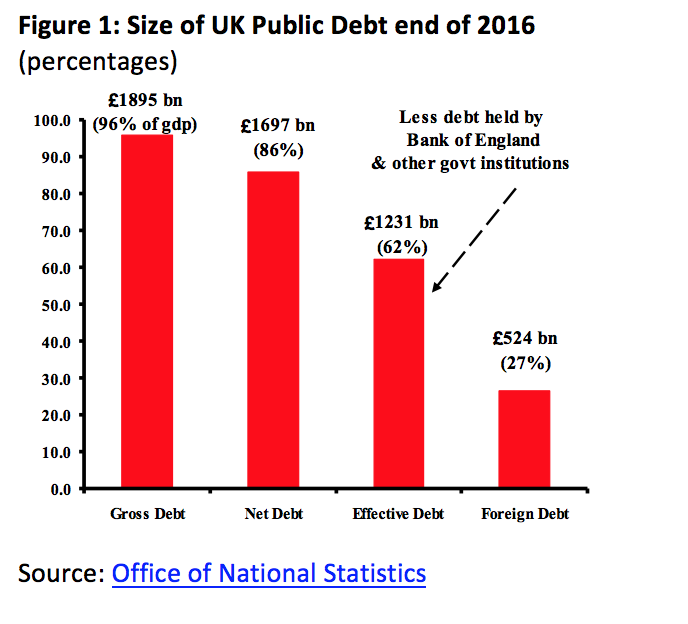 When we look closer at the national debt, its nature changes. Public sector liquid assets (for example, cash deposits held by the central and local governments and financial assets such as stocks and bonds) reduced this to £1.7 trillion or 86% of GDP. When we subtract the government’s assets from its debt, we have the net debt, the measure of public indebtedness used by the Treasury. The gross/net distinction also applies to households. A household with a £300,000 mortgage and £50,000 in the bank has a net debt of £250,000.

Another 27% of the net debt amount (£466 billion) was held by public sector institutions, the vast majority by the Bank of England. This portion of the national debt is what the public sector owes itself. Subtracting this gives the effective debt, the debt that the UK government owes to others. In 2016, the effective debt was 62% of GDP.

The Public Debt Is Not a Burden 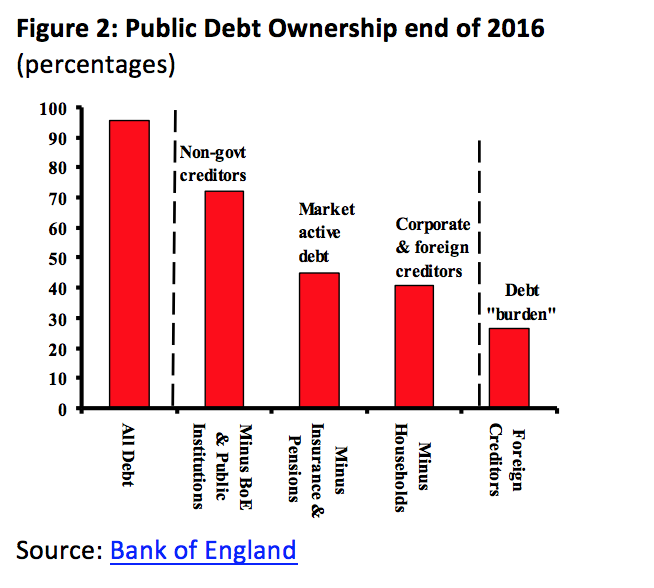 Pension funds hold a large portion of the 75% of gilts not owned by the government. The interest paid on debt held by pension funds is income to retired households. As such, this portion of the national debt is a source of household income, a benefit not a burden to citizens.

Debt held by the government itself and pension funds are long term holdings, rarely bought and sold. They do not represent a speculation danger that might put upward pressure on bond rates. When these are subtracted the remaining “gilts” constitute the market-active public debt, £808 billion, or 45% of GDP.

At the end of 2016, private corporate and foreign gilts holders owned 41% of the UK’s national debt. Only the £524 billion of gilts held by foreign creditors could be considered a “burden” in that the associated interest payments are from UK taxpayers to non-UK creditors. For fiscal year 2015/16 interest payments to foreign creditors were approximately £12 billion, or 0.6% of GDP – quite a small burden.

This analysis of the nature, size and ownership of the UK public debt shows that it poses no threat to economic stability. Its size is modest and its burden on taxpayers is minor. From this come the following policies to end austerity: