Yves here. The decline in use of high-deductible health insurance policies is important not just for employees who get insurance at work, but for the public generally. The retreat by employers will make it harder to treat high-deductible plans as a preferred option for expanded government-provided care.

Note that employers health care costs, as you might expect, continue to rise. And even though employers aren’t so keen about high deductible plans, average deductions are rising. From the Wall Street Journal:

The average cost of employer health coverage offered to workers rose to nearly $20,000 for a family plan this year, according to a new survey, capping years of increases that experts said are chiefly tied to rising prices paid for health services.

Annual premiums rose 5% to $19,616 for an employer-provided family plan in 2018, according to the yearly poll of employers by the nonprofit Kaiser Family Foundation. Employers, seeking to blunt the cost of premiums, also continued to boost the deductibles that workers must pay out of their pockets before insurance kicks in….. 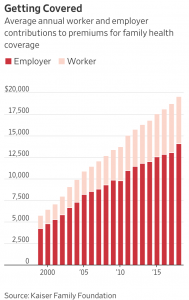 Nationwide, workers paid $5,547 a year on average in premiums for a family plan in 2018, according to the Kaiser employer survey. That represented 29% of the total premium cost.

In 2017, workers’ average premium contribution for a family plan was $5,714, or 31% of the total cost, slightly higher than this year’s figure but not statistically different, according to Kaiser.

For an individual employer plan, the average total premium cost was $6,896 in the 2018 survey, or 3% higher than last year, with workers paying 18% of the total.

The average 2018 general deductible for individual-worker coverage was $1,573, according to the survey, up from $1,505 last year and $1,135 five years ago. Those averages don’t include plans that lacked such deductibles.

By Jay Hancock, a Senior Correspondent for Kaiser Health News, who previously worked for The Baltimore Sun, The Virginian-Pilot of Norfolk, and the Daily Press of Newport News. Originally published at Kaiser Health News

With workers harder to find and Obamacare’s tax on generous coverage postponed, employers are hitting pause on a feature of job-based medical insurance much hated by employees: the high-deductible health plan.

Companies have slowed enrollment in such coverage and, in some cases, reinstated more traditional plans as a strong job market gives workers bargaining power over pay and benefits, according to research from three organizations.

This year, 39 percent of large, corporate employers surveyed by the National Business Group on Health (NBGH) offer high-deductible plans, also called “consumer-directed” coverage, as workers’ only choice. For next year, that figure is set to drop to 30 percent.

“That was a surprise, that we saw that big of a retraction,” said Brian Marcotte, the group’s CEO. “We had a lot of companies add choice back in.”

Few if any employers will return to the much more generous coverage of a decade or more ago, benefits experts said. But they’re reassessing how much pain workers can take and whether high-deductible plans control costs as advertised.

“It got to the point where employers were worried about the affordability of health care for their employees, especially their lower-paid people,” said Beth Umland, director of research for health and benefits at Mercer, a benefits consultancy that also conducted a survey.

The portion of workers in high-deductible, job-based plans peaked at 29 percent two years ago and was unchanged this year, according to new datafrom the Kaiser Family Foundation. (Kaiser Health News is an editorially independent program of the foundation.)

Deductibles — what consumers pay for health care before insurance kicks in — have increased far faster than wages, even as paycheck deductions for premiums have also soared.

One in 4 covered employees now have a single-person deductible of $2,000 or more, KFF found.

Employers and consultants once claimed patients would become smarter medical consumers if they bore greater expense at the point of care. Those arguments aren’t heard much anymore.

Because lots of medical treatment is unplanned, hospitals and doctors proved to be much less “shoppable” than experts predicted. Workers found price-comparison tools hard to use.

High-deductible plans “didn’t really do what employers hoped they would do, which is create more sophisticated consumers of health care,” Marcotte said. “The health care system is just way too complex.”

At the same time, companies have less incentive to pare coverage as Congress has repeatedly postponed the Affordable Care Act’s “Cadillac tax” on higher-value plans.

Although deductibles are treading water, total spending on job-based health plans continues to rise much faster than the overall cost of living. That eats into workers’ pay in other ways by boosting what they contribute in premiums.

Employer-sponsored group health plans, which insure 150 million Americans — nearly half the country — tend to get less attention than politically charged coverage created by the ACA.

For these employer plans, the cost of family coverage went up 5 percent this year and is expected to rise by a similar amount next year, the research shows.

Insuring one family in a job-based plan now costs on average $19,616 in total premiums, the KFF data show. The American worker pays $5,547 of that in a country where the median household income is more than $61,000.

The recent cost upticks, driven by specialty drug costs and expensive treatment for diseases such as cancer and kidney failure, are an improvement over the early 2000s, when family-coverage costs were rising by an average 7 percent a year. But they’re still nearly double recent rates of inflation and increases in worker pay.

Such growth “is unsustainable for the companies I have been working with,” said Brian Ford, a benefits consultant with Lockton Companies, echoing comments made over the decades by experts as health spending has vacuumed up more and more economic resources.

For now at least, many large employers can well afford rising health costs. Earnings for corporations in the S&P 500 have increased by double-digit percentages, driven by federal tax cuts and economic growth. Profit margins are near all-time highs.

But for workers and many smaller businesses, health costs are a heavier burden.

Premiums for family plans have gone up 55 percent in the past decade, twice as fast as worker pay, according to KFF.

Employers’ latest cost-control efforts include managing expenses for the most expensive diseases; getting workers to use nurse video-chat services and other types of “telemedicine”; and paying for primary care clinics at work or nearby.

At the “top of the list” for many companies are attempts to manage the most expensive medical claims — cases of hemophilia, terrible accidents, prematurely born infants and other diseases — that increasingly cost as much as $1 million each, Umland said.

Employers point such patients to the highest-quality doctors and hospitals and furnish guides to steer them through the system. Such steps promise to improve results, reduce complications and save money, she said.

On-site clinics cut absenteeism by eliminating the need for employees to drive across town and sit in a waiting room for two hours to get a rash or a sniffle checked or get a vaccine, consultants say.

Almost all large employers offer telemedicine, but hardly any workers use it. Thirty-nine percent of the larger companies covering telemedicine now make it comparatively less expensive for workers to consult doctors and nurses virtually, the KFF survey shows.