This is an odd sort of success, but the reader who asked us to post on this disgrace to Chicago credits NC exposing it to the city cleaning it up….and who should know better than a local? From a January 2017 post:

Yves here. While this is a reader pet peeve, horse dumps are a bona fide issue in American cities. And aside from the aesthetic and potential health cost of horse dumps, it’s also a potential resource being squandered. The soil in Birmingham, Alabama isn’t all that hot; it’s red from iron deposits. Every year, my father would collect a load of “zoo doo” from the Birmingham Zoo to use in his vegetable garden.

By Stephen T. Ziliak, Professor of Economics at Roosevelt University and lead author of the critically acclaimed book, The Cult of Statistical Significance. His popular essay on “Haiku Economics” was featured in Who Reads Poetry: 50 Views from Poetry Magazine (University of Chicago Press, 2017; eds. Fred Sasaki and Don Share) 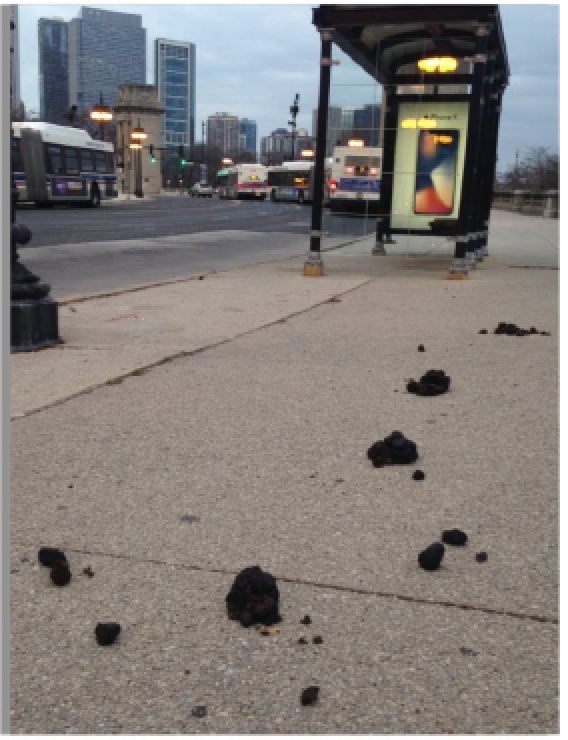 Bus stop near Michigan Ave and Congress
We’ve heard a lot about Goop in the Loop—Gwyneth Paltrow’s controversial “lifestyle” pop up here in Chicago. But is anyone curious about those big piles of “poop” in the Loop? Poop in Chicago, period, it’s popping up everywhere.

I’ve gathered some samples in an ethnographic vein. For the past few weeks, during afternoon walks, I’ve employed my (ahem) iPhone 5 to photograph the fresh and ancient piles. (I couldn’t help it: no joke, the shit is everywhere.) The photos included here are a representative selection from over a hundred I’ve taken in the South Loop and Grant Park area.

So far as one can surmise, most of the piles have not been squeezed out by runaway horses or John Wayne’s men. The Dave Matthews Band is, this time, seemingly innocent. No, this poop comes primarily from Chicago’s police horses – sitting, rotting, infecting and spreading for up to weeks at a time. Even Rahm Emmanuel – the city’s mayor – and Chief of Police Eddie Johnson will have to admit: that’s real horseshit. 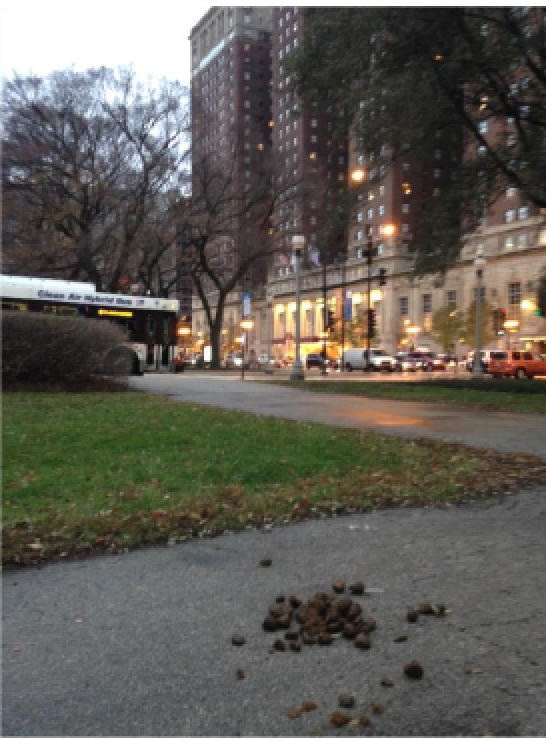 Spirit Garden, Michigan Avenue
Regardless, why is there so much poop on the sidewalks of Chicago? Or New York, or San Francisco, or other big city?

An economist would say that since there is no price assigned to horse poop it (the economic “bad”) is oversupplied. People (police, in this case) behave as if there is zero price – zero cost – to their action. Thus the traffic jam which occurs when drivers gooseneck. (You really should stop.) Thus “Bubbly creek” in the Chicago River (ditto). Thus racism and sexism in the workplace (ditto). Thus texting while driving (ditto). Thus poop in the Loop, a tragedy of the commons. In common vernacular, it’s called “dumping” and “running”. 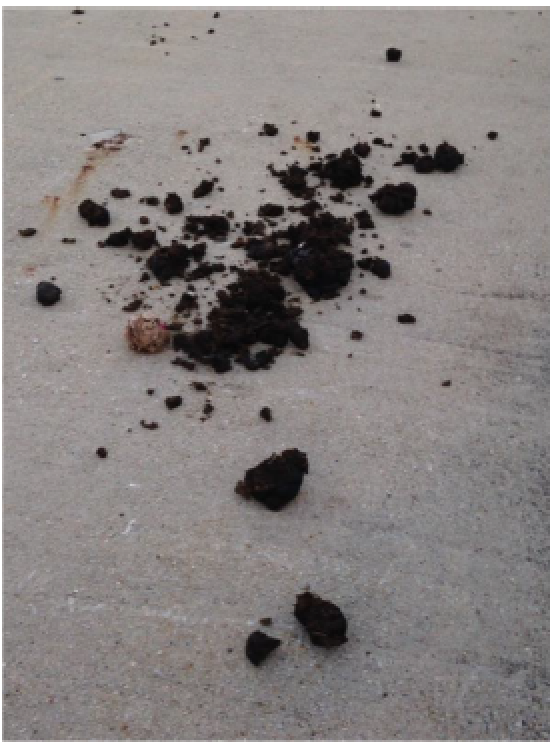 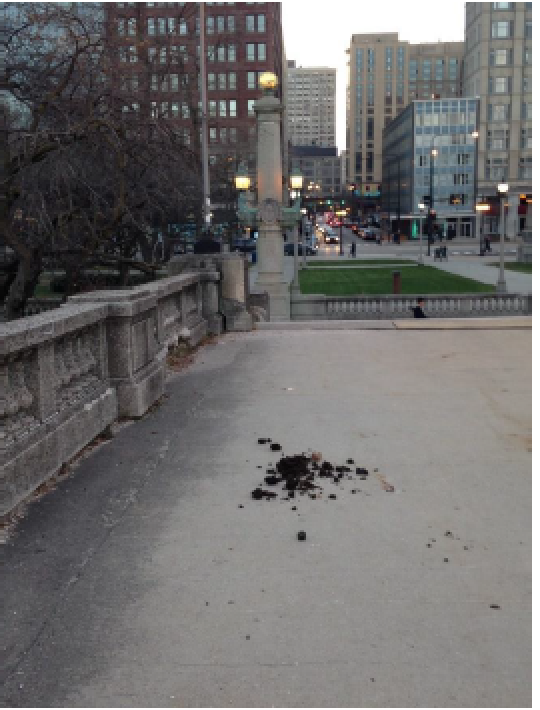 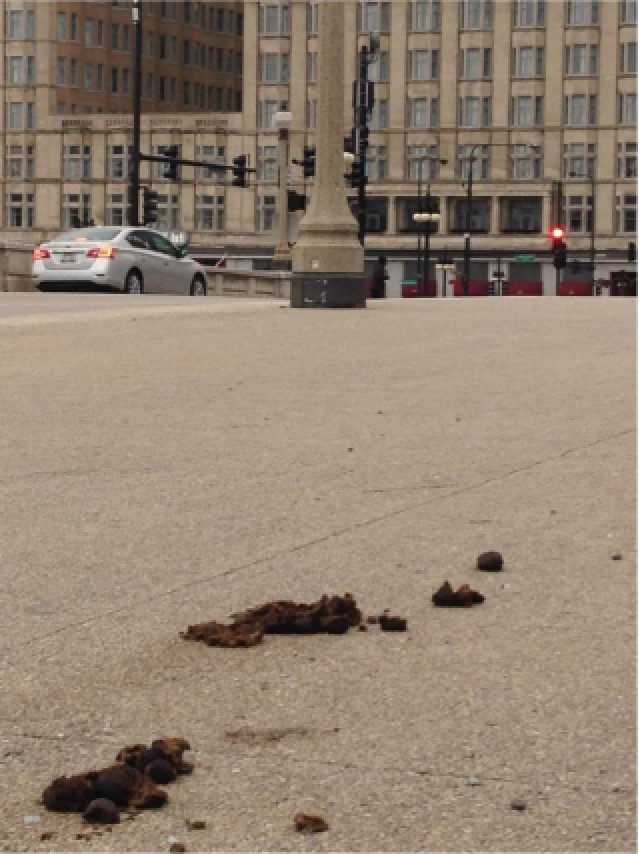 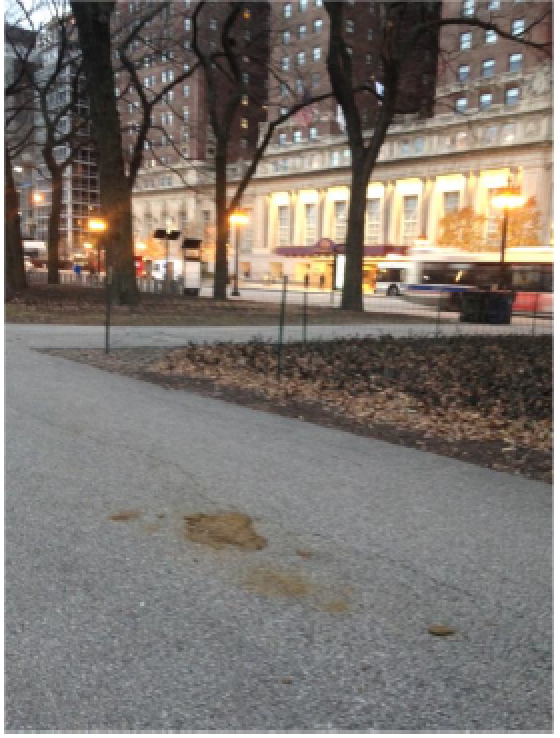 Same vintage, all spread out, one week later

There was even more, both examples and a description of health hazards, but you get the idea.

We got this message from Steve Ziliak today:

I thought you’d enjoy hearing that there is no more poop in the Loop!

Seriously. Ever since you ran the piece (no pun intended!) in Naked Capitalism, there is nary a rabbit pellet to be seen, and – again – no horse poop!

I walked and cycled and waited for it to come during summer: Lollapalooza, Blues Fest, Taste of Chicago etc. Still, no poop.

Congrats to us and many thanks.

p.s. Chicago PD increased in force in Grant Park, the Loop, the Lake — but they are on bicycles instead of
horses.

So Chicago readers should thank Steve for being a good citizen, documenting the problem, and sending us a writeup that made it easy for us to publicize it.