The recent report from the Intergovernmental Panel on Climate Change (IPCC, 2018) rightly raises the alarm about the dangers of global warming of 1.5 °C beyond the “pre-industrial” temperature level circa 1850-1900. Unfortunately, the present situation is far worse than the Panel suggests. Its projections regarding reductions in energy use while maintaining historically observed productivity and income growth patterns into the future are inconsistent with historical experience. They understate the impact of continued economic growth on carbon dioxide emission and climate damage.

On the other hand, sufficient mitigation of emission could offset the damage. It would require new spending, large but lying within the range of macroeconomically feasible reallocations. Political consensus could be another story.

We begin with two sets of background observations, then describe the IPCC’s scenarios, and conclude by examining potential macroeconomic repercussions.

The first point is that increasing CO2 emissions from combustion of fossil fuels has gone hand in hand with industrialization and increases in the real output/employment ratio (or “labor productivity”) for more than 250 years. Compared to traditional sources (waterpower, wood, animal and human traction) coal and subsequently petroleum and natural gas are readily available, relatively easy to handle, and have high energy density.[1] Here is a capsule history:

The bottom line is that fossil fuels have been built into the core of modern technology, required by essentially all prime movers with the partial exception of electricity. (One-third of supply comes from non-fossil sources including nuclear and hydro but it also uses coal, the dirtiest and most harmful of fossil fuels). Over 90% of primary energy supply comes from CO2–producing fossil and biofuels.[2]

Second, this technological bias means that world energy utilization per person has risen in direct proportion to output per capita: A one percent increase in income is associated with nearly a one percent increase in energy use.[3] With fossil energy sources built into the economy in such a fundamental manner, CO2 emissions go up in direct proportion to output, with Earth only absorbing a fraction in natural “sinks.” Remaining emissions add to greenhouse gas (or GHG) in the atmosphere. Since the 19th century it has been known that atmospheric GHG causes global warming. Through various channels (i.e., reduced health, increased diseases, and the more direct economic consequences of lower profits and the direct destruction of capital) warming causes reductions in the flow of world gross domestic product, not to mention the devastating impacts on ecosystems described by the IPCC.

Myriad details underlie this macro level causal loop: a positive effect of output on GHG accumulation, and a negative feedback of the rising atmospheric stock of GHG on output growth.  Complications notwithstanding, unless this loop is severed, it will inevitably lead to worldwide economic collapse. The recent IPCC report suggests that, as we learn more about the climate’s response to emissions, the crash can come sooner than was previously expected.

There are two ways to sever the loop. One is to mitigate atmospheric GHG accumulation created by burning fossil fuels to supply energy—either by avoiding carbon-emitting energy sources or by finding ways to sequester emissions once they occur. The other is to employ less energy to raise output. The two are complementary, and the IPCC relies heavily on both to keep to the 1.5°C target. While transforming the energy system to create no (or preferably negative) emissions is a daunting challenge already, the second is even harder given the historical record mentioned above.

In very round numbers, current world population is 7.5 billion, and real output or GDP in 2010 at market exchange rates is $75 trillion per year. Hence GDP per capita is $10 thousand. It is convenient to measure the rate at which energy is consumed in terms of kilowatts per person.[4] Worldwide, energy is consumed at the rate of 18 terawatts (trillion watts) or roughly 2.5 kilowatts per capita.

These numbers explain the labels on the axes in Figure 1. The world currently operates at 2.5 kilowatts and $14.5 thousand at purchasing power parity[5] at the top right end of the historical trajectory (from 1960 to 2016), the solid black line. The dashed and dotted lines illustrate future prospects, if the average growth rates from 1970-2016, and from 2000 to 2016 were to continue until 2050. They are labeled ex 1970 and ex 2000 respectively. These trajectories show proportionality between energy and real income per capita.

Figure 1: Historical and scenario trajectories of output per capita and energy demand per capita. 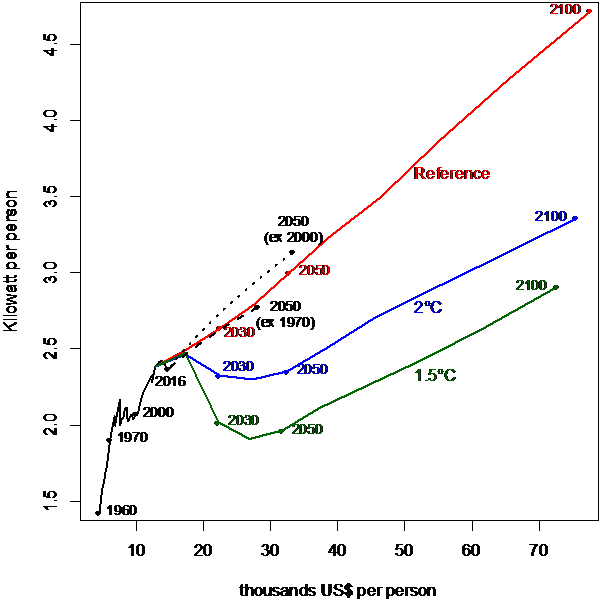 The IPCC enters with a “reference” or “business as usual” (BAU) scenario in red which is supposed to mirror past dynamics, even though it is evident that it falls below the extrapolation from the 2000s and grows much faster than the extrapolation from the 1970s. It implies that a given level of output per capita (horizontal axis) can be supported by lower-than-historically- observed energy per capita (vertical axis). A dot shows where the scenario is in 2050, with output in the upper range of extrapolations at a substantially lower power level. All these trajectories would spell continued global warming, several degrees above the envisaged 1.5°C target.

The two blue curves represent IPCC scenarios in which global warming is held below 2.0 and 1.5 degrees, respectively, by the year 2100 (with a possibility of some overshoot in the interim).[6] The trajectories show a very substantial reduction in energy demand relative to a high level of GDP per capita. The implied output growth rate is about 3.0% per year until 2050—similar to or faster than historical rates.

In the scenarios, renewable substitutes for fossil fuels only come online gradually, playing a smaller role in the next two decades which are decisive for climate change. Table 1 quantifies the contribution in the reduction of fossil fuel use from BAU to the 1.5 scenario. Until 2040, around three quarters of reduced energy demand comes from fossil fuel reductions relative to baseline. Renewable energy starts to become more important only at mid-century, when the critical window to reduce emissions has all but passed.

All figures in Exajoules per year. Source: Huppmann et al. 2018.

In a macroeconomic model of economic growth designed to analyze the implications of reducing global warming with greater reliance on shifting the fuel mix rather than reducing energy demand (Rezai et. al., 2018), we used an initial mitigation cost of $160 per metric ton of carbon, or $44 per ton of CO2, in the mid-range of current estimates. Net carbon emissions are now on the order of 10 gigatons (billion tons) per year.

The model is built around the feedback loop described above. Output is broadly proportional to capital, so that the “state” variables, which evolve over time, are stocks of capital and atmospheric CO2. Labor productivity grows with the level of capital, and also increases in response to higher employment. In line with the historical pattern in Figure 1, growth of the ratio of energy use to employment is proportional to the growth of productivity—i.e. to make people more productive, they need more energy per person.

There is doctrinal dispute among economists about whether output in the medium run is set by forces of supply (typically assumed to involve full employment of labor and determination of investment in new capital by available saving) or whether it responds to effective demand (full employment not assumed and saving follows investment). Our model incorporates the latter assumptions. Outlays on mitigation add to demand, and so generate more output and employment.[7]

Figure 2 summarizes results from three runs of the model: BAU with no mitigation, mitigation set to hold the global temperature increase to 2°C, and full mitigation from the start to maintain the increase at the level of 1.3°C to which we are committed today (i.e., the level of warming that will materialize due to the emissions in the atmosphere already).

Figure 2: Simulations of the impact of different mitigation scenarios on the economy. 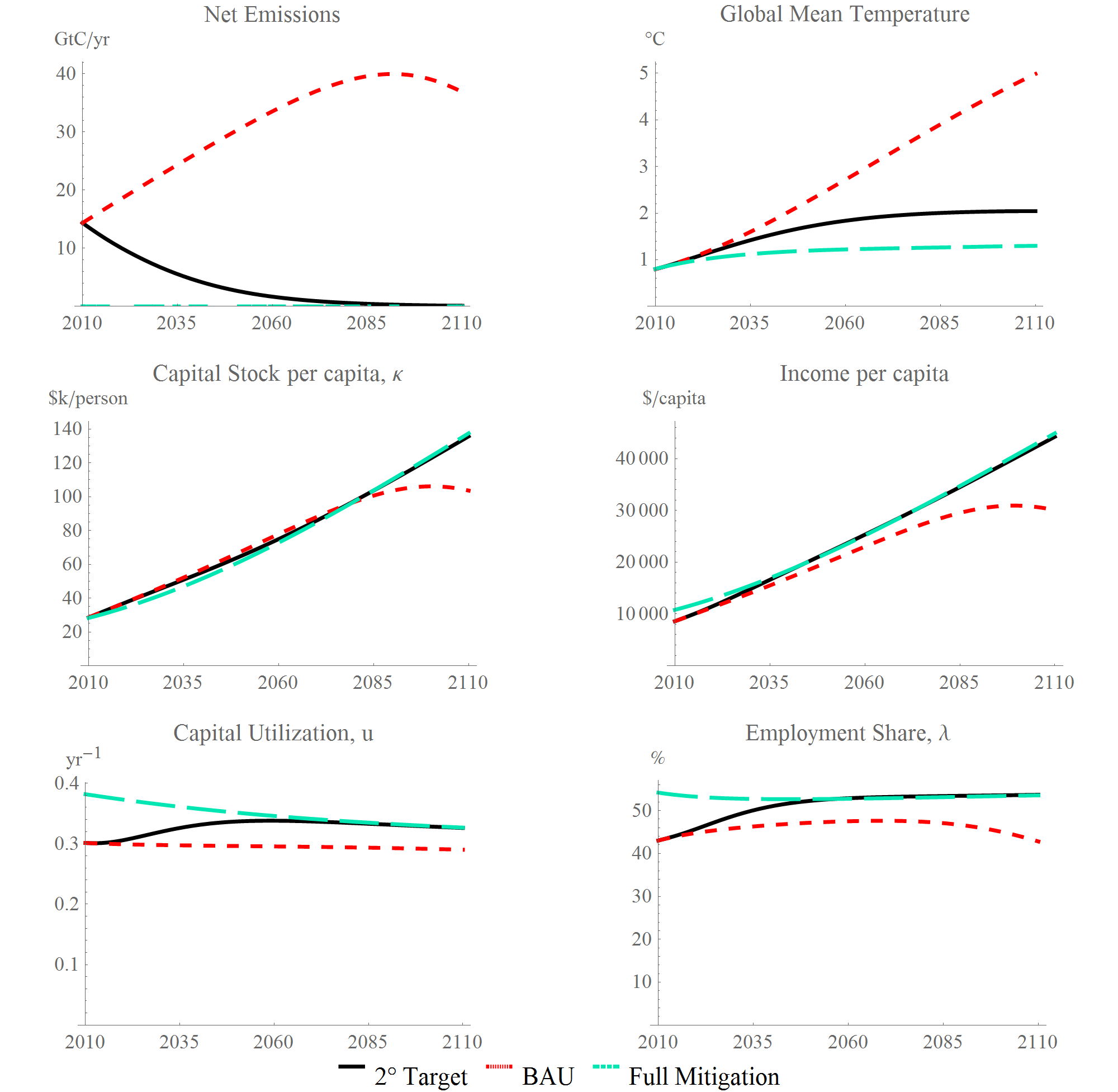 Unsurprisingly, BAU runs the economy into a climate crisis. Net emissions go up for nearly a century and then trail off in the wake of an output collapse (upper left diagram). In the upper right-hand panel, the global mean temperature increase rises steadily by almost 5°C over a century. The underlying cause for this rise in emissions is a growing capital stock and income per capita, which start to fall precipitously as the climate worsens (middle panels), holding the output/capital ratio relatively stable (bottom left). The share of employment in population collapses as well.

The two scenarios with mitigation avoid the crisis. Cumulative net emissions stay close to current levels so that the temperature increase is held down.  Capital stock and income per capita increase exponentially and the employment/population ratio is stable.

Figure 3 illustrates the timing of mitigation outlays. Full mitigation holds the temperature increase to 1.3°C. An initial mitigation “big push” is built into the timing, with outlays starting out at six percent of GDP and tailing off to about two percent. The simulation amounts to a more extreme version of the IPCC 1.5°C package, also because we are less optimistic regarding the deployment of negative emissions technology (i.e., the ability to reduce atmospheric carbon levels directly) within this century. The initial push in the model’s 2°C run is not as big as with full mitigation, but still peaks at three percent of GDP.

Figure 3: Mitigation shares and expenditures for the mitigation scenarios. 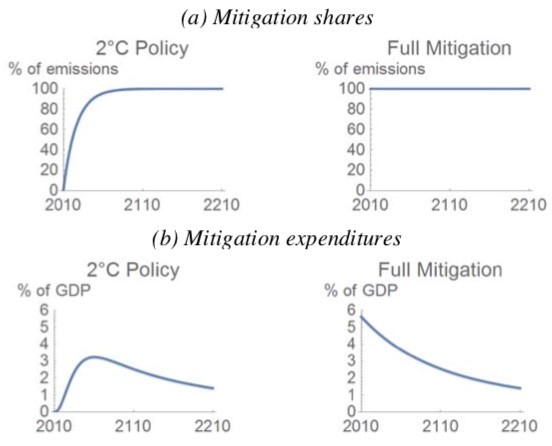 In absolute terms, these outlays are large but comparable to other forms of spending. Three percent of current world GDP at market prices is $2.25 trillion. This magnitude compares to the world total of $1.74 trillion spent on the military. In several large countries the military’s share of GDP is in the range of two to four percent. Fossil fuel subsidies worldwide are estimated to be in the range of $5 trillion.

These numbers suggest that a big mitigation push, perhaps financed by carbon taxes and/or reductions in subsidies, is possible macroeconomically even if the link between energy use and output is not severed. This, however, would require considerable modifications of countries’ macroeconomic arrangements. Needless to say, military establishments and recipients of energy subsidies wield political clout. Fossil fuel producers have at least as much. Whether national preferences will permit big shifts in the use of economic resources is the key question. The IPCC report may help lead to a rational answer.

[1] Burning a kilogram of coal yields twice the energy as comes from the same amount of wood. Gasoline yields three times as much.

[2] For detail on energy see a new MIT textbook by Jaffe and Taylor (2018), largely accessible to the “intelligent layperson.”

[3] See Semieniuk (2018) for a review of the evidence. Recent investigation suggests that the correlation between the component of energy delivering useful work (in the physics sense of applying a force over a distance) and GDP is even higher (Serrenho et al. 2016).

[4] Power as measured in kilowatts is the flow of energy per unit time (a traditional 100-watt lightbulb uses 0.1 kilowatts or 100 joule per second). A standard metric for energy itself is kilowatt-hours (kilowatts times hours). Power absorbed by a typical US household is 1.2 kilowatts, or 11 thousand kilowatt-hours of energy per year.

[5] GDP at “purchasing power parity” or PPP is based on the idea that relatively inexpensive goods and services produced by cheap labor allow higher levels of real consumption (think of the comparative costs of haircuts in Mumbai and Manhattan). Estimated income in India, China, and all other poor countries is thereby adjusted upward, increasing the world total. The IPCC presents results in terms of PPP.

[6] All three IPCC curves are based on the marker implementation of the “middle of the road” scenario of future growth, energy demand, and technical change which is to continue past trends (Fricko et al. 2017), and are supposed to be comparable to historical data. The second of the five ‘shared socioeconomic pathways’ or SSPs (O’Neill et al. 2017)  underpins the integrated assessment models used in the new IPCC report.

[7] See Mercure et al. (2018) for an integrated assessment model where output is demand-determined.