Uber and Lyft’s valuations expose the gig economy to scrutiny FT. “Uber and Lyft customers are heavily subsidised by investors: both companies are still losing money. And while IPOs do not necessarily result in sober valuations based solely on the facts, the process will at least expose the sector to closer scrutiny.”

Say goodbye to the cold, hard cash in your pocket Australian Financial Review

Bolsonaro: Brazil ‘liberated from socialism’ with him in power Reuters

Brexit: misdirection EU Referendum. Doing the arithmetic on route substitution for the Dover corridor in the case of a No Deal.

The United Kingdom is on life support CNN

A Eurocrat’s guide to Bucharest Politico. Romania takes over the EU’s rotating Presidency.

Opinion: We were winning when we left DuffelBlog

Time to Get Out of Afghanistan Robert Kaplan, NYT

Donald Trump considering delay to US withdrawal from Syria The National. From the UAE.

Russia Has a Plan for Libya—Another Qaddafi Bloomberg. Since our plan seems to have been rebooting slavery, it’s hard to imagine that anything else wouldn’t be an improvement.

‘We are new Russians’: How a hard-drinking nation curbed its alcohol use CBC

I keep seeing images and videos of glass-bottomed bridges from China:

Chinese manufacturing had an even worse December than expected, more data show CNBC

The future might not belong to China Martin Wolf, FT

In a post-James-Mattis South China Sea, can the next US defence chief do what needs to be done to prevent war? South China Morning Post (Furzy Mouse).

Deep underground, new NYC train hub slowly takes shape AP. Key word: “Slowly.” Next up, a new tunnel under the Hudson? To replace the one we know is going to fail?

Airport water fountains shut down after passengers become ill on Frontier Airlines flight CNN. Welcome to the Third World. And no jokes about Cleveland, please; this is systemic.

White House: Pelosi’s plan to reopen the government ‘a non-starter’ The Hill

The Secret Behind Growth in Trump’s America Is Deficit Spending Bloomberg. You say “deficit spending” like that’s a bad thing!

FBI investigating Trump golf club for hiring undocumented workers after tip to Mueller Salon. Trump is the only bad apple, fortunately for us all.

The Anti-Trump Party: How The Democratic Party Has Lost Its Defining Values In The Obsession With Trump Jonathon Turley

House Democrats to push for more diversity in top corporate ranks Politico. As opposed to, say, breaking up big banks or tech monopolies.

In 2019, California workers gain on pay and working conditions. Employers say it will be costly LA Times 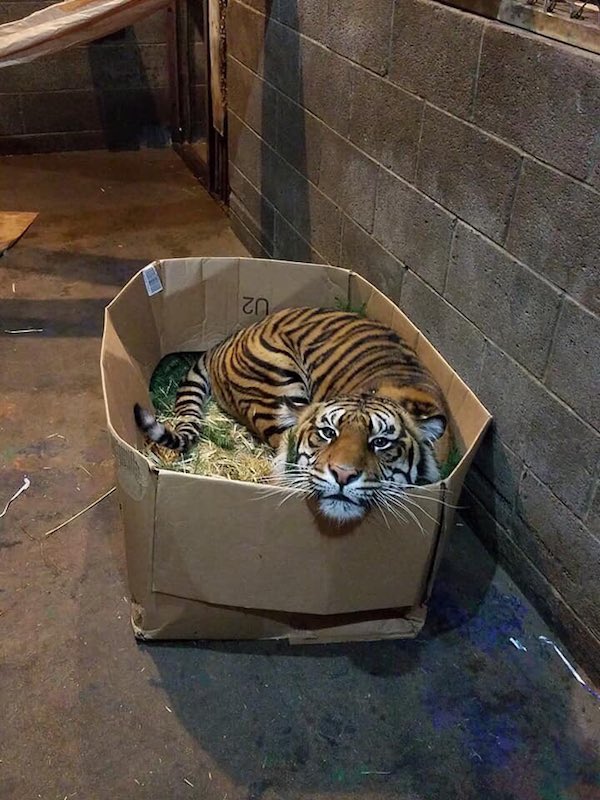 All cats love boxes. Further leveling up my cat game for 2019, a bonus antidote (via):