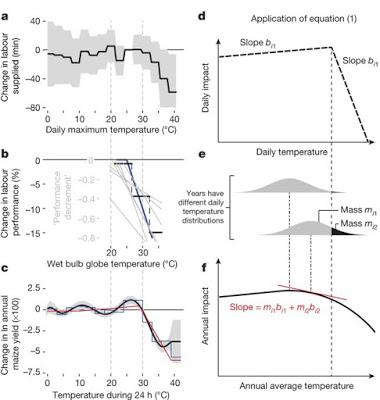 Economic growth and global warming, Figure 1 from a paper studying “Global non­linear effect of temperature on economic production” (link below). “Non-linear” in this case means “at what warming point do economies tend to ‘fall off a cliff'”? It’s not the same point for all economies, but the non-linearity is obvious. (For conversion in charts a, b, and c, 20°C = 68°F, and 30°C = 86°F. Click to enlarge.)

These headlines tell you they measure cost in terms of lost profit, not lost wages, since no one at Forbes or Bloomberg wants to see wages rise. Nor do they consider lost lives.

Green New Deal advocates assure us that indeed we can pay for it, partly because of increased productivity (it will put a lot of people to work, FDR-style) and partly because the economy can simply absorb the influx of new money without the need for high “pay for it” taxes, just as the economy is absorbing the multi-trillion cost of the Iraq War and President Trump’s tax cuts. When elites and the wealth they serve want something expensive, they get it, and no one bothers to make them “pay for it” later. 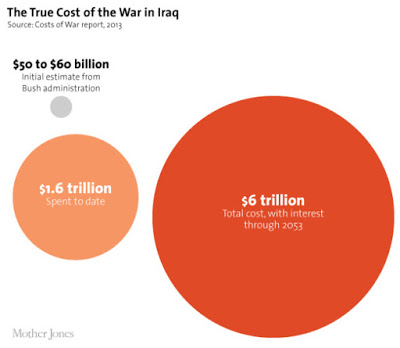 See this Huffington Post article, “We Can Pay For A Green New Deal,” by Stephanie Kelton, Andres Bernal and Greg Carlock for the gist of the “yes, it’s affordable” argument.

Both statements are true, of course. Any attempt to really mitigate climate change — make the damage less, as opposed to merely adapting to the crisis — will cost “a lot of green.” And yes, the economy can absorb the additional spending, allowing taxes to be used only as an economic cooling device (if and as needed), not as a prohibitory “pay for it” device.

But few are focusing on the real measurable — not what it will cost economically to address the problem, but what it will cost economically to not address the problem. “Cost economically” here means exactly and only what the people at Forbes and Bloomberg think it means — How does economic activity slow when atmospheric temperature rises? How are profits and wealth affected? This analysis looks at no other factors affecting the economy, such as the cost of recovery from super-storms.

One of those who did address the economic cost of not dealing with climate change is Solomon Hsiang, professor of public policy at UC Berkeley and coauthor of a little-noticed 2015 paper, “Global non­linear effect of temperature on economic production.” A link to the Nature abstract is here; a link to the paper itself is here (pdf).

The abstract begins this way (notes are linked in the original):

Growing evidence demonstrates that climatic conditions can have a profound impact on the functioning of modern human societies (1,2), but effects on economic activity appear inconsistent. Fundamental productive elements of modern economies, such as workers and crops, exhibit highly non-linear [jerky or stepwise] responses to local temperature even in wealthy countries (3,4). In contrast, aggregate macroeconomic productivity of entire wealthy countries [aggregate economic activity of whole nations] is reported not to respond to temperature (5), while poor countries respond only linearly (5,6). Resolving this conflict between micro [i.e. labor] and macro [nationwide] observations is critical to understanding the role of wealth in coupled human–natural systems (7,8) and to anticipating the global impact of climate change (9,10).

The language of the abstract is a little confusing for a lay reader, so let me explain. In essence, the question they’re studying is this: Are macroeconomies (economies of whole nations) affected by atmospheric warming, contrary to what is reported? If so, are those effects linear (gradual and along a straight line) or non-linear (sudden and precipitous at certain thresholds)?

In other words, do national economies “drop off a cliff” at certain levels of increased atmospheric heating? The graph at the top, taken from the paper, shows the answer is yes.

The authors conclude (my emphasis):

We show that overall economic productivity is non-linear in temperature for all countries, with productivity peaking at an annual average temperature of 13 °C [56°F] and declining strongly at higher temperatures. The relationship is globally generalizable, unchanged since 1960, and apparent for agricultural and non-agricultural activity in both rich and poor countries.

Note that this is a study of the past, not the future. In other words, the study looked at real-world consequences of warming that has already occurred, not projected consequences using economic models only. Thus this forward-looking conclusion: “If future adaptation mimics past adaptation, unmitigated warming is expected to reshape the global economy by reducing average global incomes roughly 23% by 2100 and widening global income inequality, relative to scenarios without climate change.”

Widening global wealth inequality means that some nations will do better than others — at first. An article covering a subsequent talk by Dr. Hsiang put it this way:

That decrease in economic output will hit the poorest 60 percent of the population disproportionately hard, said Hsiang. In doing so, it will surely exacerbate inequality, as many rich regions of the world that have lower average annual temperatures, such as northern Europe, benefit from the changes. Hotter areas around the tropics, including large parts of south Asia and Africa, already tend to be poorer and will suffer.

A graph printed with the article indicates the eastern seaboard of the United States and northern Europe, among other places, will have improved economies (click through to see it).

But the conclusion that the East Coast and northern Europe will thrive economically is deceptive, since the study was limited to the economic effects of warming. What about the physical effects? For example, the population of the East Coast of the U.S. will at some point suffer numerous super-storms, sea level rise and the shoreline erosion that always accompanies it.

Put simply, at some point cities on both coasts will have to be moved inland as the land they sit on erodes into the ocean. How far inland? I wouldn’t want to be the planner that has to figure that out, since you only want to have to do it once.

The East Coast is home to about 120 million people. The total U.S. population is between 300–350 million people. More than a third of all U.S. citizens will be forced to relocate away from the Atlantic shore. What’s the cost of that?

As to northern Europe, if the thermohaline current (the Gulf Stream) is drastically altered by fresh water melt from Greenland, northern Europe — England, for example — will freeze like Canada in the winter, whose latitude it shares. Will England thrive economically in that scenario?

How Much Will It Cost Not to Mitigate Climate Change? $17 Trillion Per Year in Economic Loss Alone

So what’s the economic cost of not responding to global warming? According to the paper, the bottom line is this. Global GDP (called Global World Product, or GWP) was estimated between $70 and $80 trillion about five years ago. Thus, by this paper’s (highly conservative) estimates, the economic loss that results from willfully ignoring climate change will be roughly $17 trillion per year by 2100, a sum that doesn’t include the additional cost of wars, famines, droughts, plagues, epidemics, and “national emergencies” of various flavors and stripes.

Can we afford, economically, not to address climate change now? The answer, of course, is no.

Yet once more the pathological among us have us asking the wrong questions. All they want to know is, will their own wealth be affected? Will they still keep their billions? Will they die poorer than they are today?

The question we should be asking is, will the rest of us die poorer — and sooner — if our first priority is protecting the wealth of the wealthy?

The answer, of course, is yes.