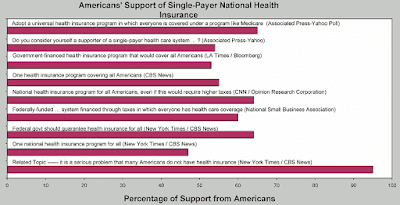 Medicare For All is wildly popular. Why not just give the public what it wants?

An argument (or “fervent discussion”) is raging on the left about the best way to approach Medicare For All (M4A) legislation — Should the plan be proposed all at once, or piecemeal?

Mike Lux, who was involved in the Clinton-era health care reform battle, accurately characterizes the opposition this way. “The problem with MFA is that it takes on almost the entire industry at the same time.  Not to mention, of course, the entire big money conservative apparatus: the Koch brothers network, the Chamber of Commerce, the National Restaurant Association, the National Federation of Independent Businesses, the Wall Street banks who have made heavy investments in insurance/pharma/for-profit hospitals, all the conservative think tanks and media outlets and grassroots operations. It would also likely be opposed even by some labor unions who have great health insurance plans that they have collectively bargained for over the years, and various big businesses that have their own plans they administer.”

Fair enough; but look at the polling for M4A (above). The problem with this argument is that it prevents the public from having the one thing it really wants — a card on day one they can use to go to the damn doctor without paying money.

Here’s Duncan Black (Atrios) to explain this position in the simplest possible terms (emphasis mine):

“We” spend too much money on health care costs in this country, but I don’t particularly care about that. I mean, I do, it’s absurd, and we shouldn’t, but it isn’t actually my job do worry about how to fix that. It isn’t your job. It isn’t the job of voters to waste their beautiful minds worrying about what the best plan to cut health care costs is, and it’s absurd that for some reason it’s expected that voters all play Wonk for a Year and try to figure out who has the wonkiest wonko plan of all.

People are paid a lot of money to figure that shit out. Go figure it out. What kind of health plan should pass that makes voters happy and doesn’t make them upset because it doesn’t raise their taxes or upset the status quo or isn’t “moderate” or whatever the fuck? One which mails them a card on day one that they can use to go to the damn doctor without paying any money. Then the wonks and the politicians can get to work for the next 10 years fixing the engine under the hood.

Make voters happy by making them happy. Tomorrow. Eat the up front costs because we are a rich country and we can afford to eat the costs, and then spend the next 10 years clawing money back from the other “stakeholders” who have been looting the bank accounts of dying people for decades. Just don’t make us have to worry about how.

Make getting sick slightly less of a hassle than Comcast Customer Support and voters will love you. It’s that simple. The details matter, but the wonks should be working out that shit between themselves, not by writing memos on op-ed pages because none of us should have to care about them.

• The best plan gives voters “a card on day one that they can use to go to the damn doctor without paying any money.”

• “Eat the up front costs because we are a rich country … then spend the next 10 years clawing money back” from the predators who’ve been looting from dead people for decades.

In other words, just get on with it and do the wonky stuff later. The public would love you for it.

Imagine if President Obama’s 2009 health care reform plan was today’s Medicare for All? Imagine how much support would he have gotten (assuming he wanted that for us in the first place, which he didn’t)? Public approval would have been instant, full-throated and universal. Remember, “Hands off my Medicare“? 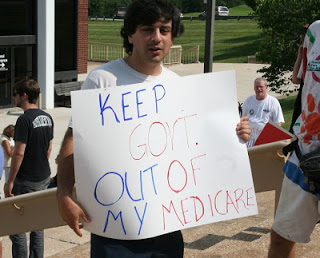 A fervent supporter of all the Medicare he can get

Black’s bottom lines are wildly popular, easy to understand — and easy to love, since no one in the country is giving to the “undeserving” what they aren’t also getting for themselves.

Which tells you immediately how to frame this: “Folks, it’s called Medicare for All, not Medicare for Some. Everyone gets the new plan — free health care forever — or no one does. So pick one: Are you in or out?”

Only the predatory health care industries will say no to that. Actual voters are the plan’s best friends. All proponents have to do is make them happy by making them happy.