Patient readers, I have had a complexified day, and I am going to beg your indulgence for an open thread. I’ll put up some conversation starters on the Mueller Report and its possible sequelae, and rise again harder and stronger tomorrow. –lambert

Here is a summary of Barr’s presser:

For those who like primary sources, here is the (redacted) Mueller Report (a PDF): Special Counsel Robert S. Mueller, III, “Report On The Investigation Into Russian Interference In The 2016 Presidential Election.” It’s 448 pages long.

Bloomberg’s National Political Reporter on the obstruction of justice charge:

Robert Mueller's conclusion on the president and obstruction of justice. pic.twitter.com/uERxnzbfZL

At this point, the only hot takes that have emerged will have been written before the report was released. Hence I see a lot of people claiming their priors have been reinforced. To me, the key point going forward, as we say, is that the Mueller Report does say that “Russian” interference with the 2016 election took place, a claim which, as Stephen Cohen points out at TRNN is both dubious and extremely dangerous, given that Russia is a nuclear power. (Playing geopolitician for a moment, I think the anti-Russian warmongering is dumb, unless a two-front (cold) war with Russia and China is a good thing).

Being counter-suggestible, let me present two story arcs that may get lost in the shuffle. The first is Wikileaks and its putative responsibility for the phishing attack on the DNC that led to the exposure of their emails. Charlie Savage:

Embedded in Barr remarks is an important qualifier: Trump campaign collusion with WikiLeaks could not be an illegal conspiracy because WL publication of the emails was not a crime since WL didn't help hack them. pic.twitter.com/4E9TpxhUx0

The second is the weird episode with George Papadopoulos and the mysterious Maltese academician Joseph Mifsud. Papadopoulos — who presents as a sort of innocent abroad — becamme enmeshed with looks like a network of Five Eyes spooks trying to nobble the Trump campaign; see this long interview with Papadopoulos here (he’s written a book). Moreover, Mifsud — right on cue? But whose cue? — seems to have re-emerged from hiding:

Finally, @ilfoglio_it reveals Joseph Mifsud has been hidden in a Link Campus apartment in Rome for at least 7 months: Via Domenico Cimarosa 3.

The whole operations seems to have been run jointly by Link Campus and Italian intelligence.https://t.co/8kXv499kxb

Whatever the truths of the matter, it certainly looks like the intelligence community was all over the Trump campaign like flies on sh*t, and if the Papadopoulos interview and book are correct, not merely doing “counter-intelligence,” but setting up honeypots, coat-trailing, installing moles, etc. — even if it’s all of a Burn After Reading caliber. Almost as if the Trump campaign were a foreign power. I assume this will emerge as a counter narrative over the next two years.

Readers, feel free to contact me at lambert [UNDERSCORE] strether [DOT] corrente [AT] yahoo [DOT] com, with (a) links, and even better (b) sources I should curate regularly, (c) how to send me a check if you are allergic to PayPal, and (d) to find out how to send me images of plants. Vegetables are fine! Fungi are deemed to be honorary plants! If you want your handle to appear as a credit, please place it at the start of your mail in parentheses: (thus). Otherwise, I will anonymize by using your initials. See the previous Water Cooler (with plant) here. Today’s plant (Phil H): 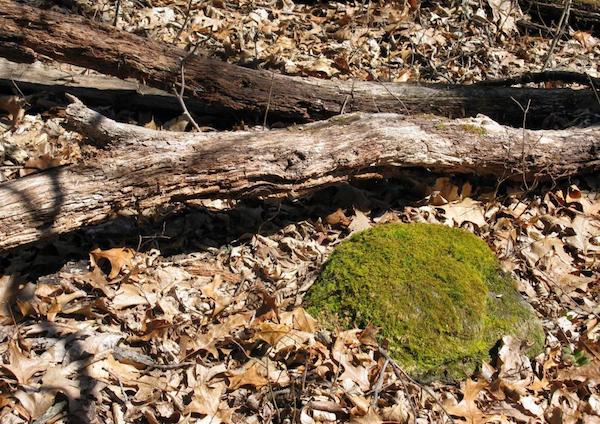 Phil H writes: “From yesterday’s walk in the Ohio woods: Just about the only green showing in the woods this early in April is moss on the scattered rocks. Here is a smallish rock next to the remains of a fallen tree.” I know this kind of walk. And as readers know, I encourage walks. But be sure to look up at the sky!