Even though the Good Friday/Easter weekend is coming up and Brexit matters are thus in low gear, the UK still seems stuck in its pattern of confusing motion with progress.

Labour-Tory talks still going nowhere. I’m not sure it would be progress even if the negotiations were going somewhere, since Labour’s Brexit scheme is awfully unicorn-y (wanting a customs union that has pretty much all the goodies of the Single Market without having Single Market obligations). But independent of the substantive difference, it’s not clear that the Tories have incentives to compromise now, given the upcoming municipal council election. The party is already looking plenty battered. Why give Labour another talking point that will give loyal Conservatives another reason to stay home?

More Tory plotting to oust May. May has stared down so many coup attempts that she likely has a food taster. Nevertheless, as always, the noise is this time they really will get her. And in fairness, there has been so much wolf-crying that it would be too easy to dismiss the scheme that finally does May in.

The state of play, per the Telegraph:

Grassroots Tories believe they are just weeks away from triggering a little-known process that could help to bring down Theresa May.

Party chairmen are circulating a petition calling for the party’s National Convention, which represents the grassroots, to call an Extraordinary General Meeting to pass a vote of no confidence in Mrs May, the Tory leader.

If the petition motion is signed by more than 65 association chairmen, the party is obliged to hold the meeting. So far between 40 and 50 party chairmen have signed it, and the threshold could be passed as early as next week.

The wee problem is that even if this move succeeded, it would not remove May as Prime Minister, just as party leader. My understanding is there have been Prime Ministers who have not been the heads of their party. So this move would fall in the category of further reducing her authority…when it’s hard to see how driving her lower from her diminished position would make much difference.

Voter positions on Brexit largely entrenched. Admittedly, this item comes from a study written up in Politics.co.uk, but it’s a large scale conducted by academics who asked many of the same questions in earlier surveys.

Hard Remainers and hard Leavers have not changed their minds. There does however seem a shift in sentiment among Left Wing Leavers with a quarter them now ranking Remain as their top preference and also among Sovereignty Remainers. Leave voters who have changed their minds mostly voted Labour in 2017 while changing Remain voters mostly voted Conservative. This means that as Labour has become more Remain, the Conservatives have become more Leave.

But are voters still changing their minds? Not really. Last September, we asked people how they would vote in a new referendum. Back then, just over 80% of Sovereignty Liberals and 70% of Conservative Remainers said they would vote Remain again, while 20% of Left-Wing Leavers had changed their minds and would now vote Remain. Overall, the numbers now are pretty similar. While Left Wing Leavers now seem slightly keener on Remain, and Sovereignty Remain voters seem to prefer some kind of Brexit deal, there hasn’t really been a significant shift in sentiment. 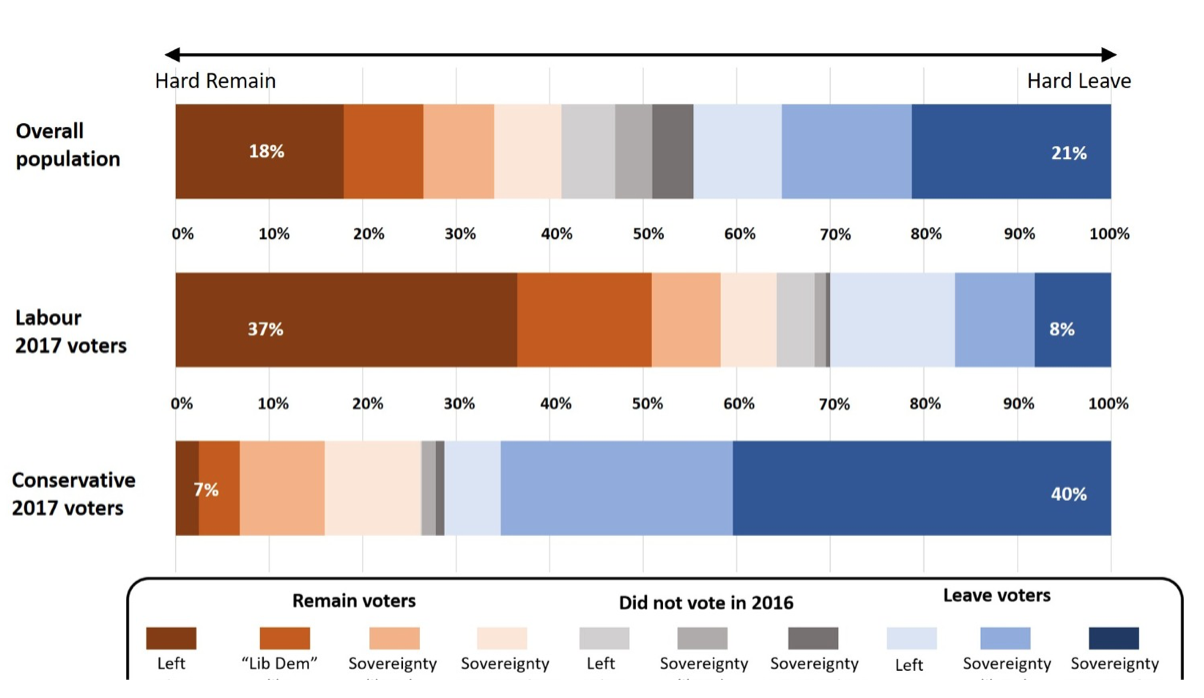 And we have this mess:

Following the repeated failures of Theresa May’s withdrawal agreement to gain a majority in the Commons, many have advocated a softer Brexit as the best compromise outcome. These range from a permanent customs union to the Common Market 2.0 proposal. But only 13% ranked a Softer Brexit as their number one option. Left Wing Leave voters were the only cluster to prefer Softer Brexit in significant numbers, with 27% of them ranking it top.

Nevertheless, Softer Brexit was very popular as a second-choice option across the voter types. Indeed, a majority of all voters ranked it second. Using an established ranked voting method, it was the overall population ranked voting winner. This is because Remainers strongly reject No Deal and Leavers strongly reject Remain. Remain voters also influence the ranking more than Leavers because they are more united in their rankings than Leave voters and heavily wanted Softer Brexit as their 2nd choice. Leave voters tend to prefer the withdrawal agreement to Softer Brexit.

Given how “first past the poll” thinking is so deeply ingrained in UK politics, it’s hard to see how to arrive at a consensus on a second-best option for most voters. And on top of that, “softer Brexit” is a unicorn-rich zone, so there’s a large risk that even if the pols were able to agree on something, that something might not be on offer from the EU. Richard North didn’t need a big poll to come to the same conclusion:

Therefore, much as we need a plan for Brexit, with the nation uniting behind it, this is not going to happen. Even if the system was capable of generating a plan which had a scintilla of credibility, the majority would oppose it. In this nation of ours, the idea of a national plan is neither a practical nor political reality.

Germany making tough noises about “no further extension.” Mind you, I don’t believe this until Merkel starts making similar noises, and even then, I’d have doubts, since Merkel is a cautious politician who prefers incremental moves whenever possible. But it could be that by October, enough things have changed that the EU decides that continuing to drag Brexit out is just too costly. Perhaps the EU Parliament elections look like a validation of Macron. Perhaps Barnier’s successor is less conciliatory towards the UK. But change on the EU side could just as easily strengthen the tendency to engage in neverending extensions.

Germany’s foreign minister has warned London that there will be no Brexit extension beyond October, sending out the strongest signal yet that Berlin’s patience with the UK’s deadlocked political system is starting to wear out.

“They will have to decide what they want by October,” Heiko Maas told the Financial Times in an interview. “You cannot drag out Brexit for a decade.”

Angela Merkel, German chancellor, fought hard to secure a six-month Brexit delay at last week’s European summit against French insistence that the UK should be given at most until the end of June to secure an orderly withdrawal from the EU. Mr Maas’s intervention suggests that Berlin will side with the harder French line should the new Brexit deadline of October 31 draw closer without progress on the UK side.

He also cautioned British leaders that an appeal for a further Brexit delay would be read as a plea to remain in the EU: “Another extension could send the signal that they plan to stay in the EU after all.”

Now this comment could reflect the fact that some Europeans allowed themselves to believe the Corbyn-May talks might get somewhere, when anyone who knew UK politics would see that odds of that happening as very remote. Or this could be more messaging to encourage the Remain faction.

So expect another confused next six months. And May seems likely to still be nominally in charge.