Yves here. Wolf Richter, and now his colleague Don Quijones with the implosion of Debenhams, have been chronicling the wipeout in bricks and mortar retailers and in particular, the significant role private equity has played in many of these demises. Some of them, like the bankruptcy of Toys ‘R” Us, resulted from good old fashioned overleveraging, which led to under-investment, especially in e-commerce. But another big factor, chronicled at length in the landmark book Private Equity at Work by Eileen Appelbaum and Rosemary Batt, is asset stripping. Many retailers own their own stores so as to lower their operating costs and enable them to ride out business cycles. Private equity firms would often sell the real estate, then lease it back to the retailer, often at a high rental so as to provide attractive yields on the properties. The spun-out stores would fetch a nice price early in the deal’s life, goosing the apparent returns….and providing an ample cushion if (and more often than not, when) the retailer foundered under the high lease payments.

Shares of UK-based multinational department store Debenhams — with 165 stores in the UK and Ireland and with 58 franchise stores in 19 other countries — were suspended today after the company and its creditors turned down two last ditch rescue offers from discount retail group Sports Direct, which owns close to 30% of Debenhams’ stock. Debenham’s shares have collapsed spectacularly since they were floated on the stock market in 2006 by its then-private equity owners, Texas Pacific Group, CVC, and Merrill Lynch Private Equity: 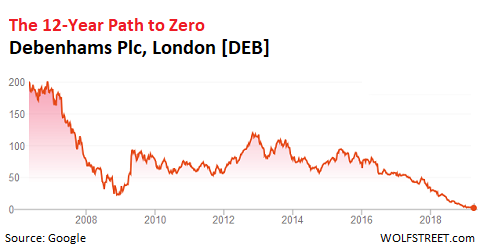 The latest rejection means that Debenhams, after gracing British high streets for over 200 years, now faces a “pre-pack” administration that will wipe out its shareholders, including Sports Direct which is estimated to have plowed at least £150 million into the firm.

On its corporate website Debenhams stated that while the Group’s holding company has gone into administration, its operating companies “continue to trade as normal” and its commercial stakeholders, including suppliers, are not adversely impacted by the Company’s administration. “We remain focused on protecting as many stores and jobs as possible, consistent with establishing a sustainable store portfolio in line with our previous guidance.”

Debenhams had given Sports Direct until Monday April 8 to launch a firm takeover bid that included arrangements to either refinance the group’s debt or underwrite the issuance of new shares. Sports Direct, which rescued the rival department store House of Fraser from administration last October, had offered to underwrite a £150-million rights issue for Debenhams, but on two conditions: that Mike Ashley, Sport Direct’s CEO be appointed Debenhams chief executive, and that Debenham’s lenders pledge to write off a similar amount of debt.

It was an offer Debenhams’ board of directors and lenders felt they could and should refuse. Even when Ashley upped the bid to £200 million late Monday evening, it was still rejected. Trading in Debenhams’ shares was later suspended at the company’s request. By Tuesday morning the retail group that once boasted the UK’s biggest chain of department stores had become the property of its lenders, which intend to close around 50 of Debenhams’ 165 stores via an insolvency process called company voluntary arrangement.

Many will blame the decline and fall of this high street stalwart on the growing exodus of consumers to online platforms and cheaper outlets, as well as, of course, the confidence sapping effects of the British public’s decision in 2016 to leave the EU, which both the British government and parliament now seem determined to thwart.

But in reality, the rot at Debenhams began to set in long before online retail became the menace of main street and even longer before the term “Brexit” was conjured into existence. In fact, the store’s decline can be traced all the way back to 2003 when a consortium of private equity houses led by Debenhams’ then CEO Rob Templeman and made up of Texas Pacific Group, CVC and Merrill Lynch Private Equity bought the company. The consortium funneled just £600 million of their own funds into the £1.8 billion deal, while the rest was financed by new debt that Debenhams had to take on.

Short-term thinking, chronic under investment, bucket loads of borrowing allowed the financiers to make off with bumper profits while the business was saddled with £1.2 billion of debt it was never able to pay off. As the UK Independent reports, that debt pile prevented the firm from making the sort of investments that might have given it a fighting chance of weathering the storm that is now battering the bricks-and-mortar retail sector:

“Its private equity buyers slashed costs and sold off freehold property while opening new stores to boost profits (and juice their returns) before floating the company less than three years later.

“Spending on refurbishments was cut by 77 per cent to £7 per square foot, less than a tenth of what Marks & Spencer was spending at the time.”

Following its collapse today, Debenhams joins a long line of once-ubiquitous retail chains (BHS, Banana Republic, Barratts, JJB Sports, Comet, C&A, Dixons…) that were unable to adapt to the brutal conditions that prevail on the UK high street. As a new report from the London-based estate agency Knight Frank spells out, the sector is beset with structural failings that have been “30 years in the making” and which are now “preventing the recovery of the retail market.” They include:

And last but not least…

The report concludes that retailers should be run as retailers, by retailers, not as cash cows by financiers. Unfortunately, for many fallen firms, their other stakeholders, and employees, it’s a little late in the day for such advice.