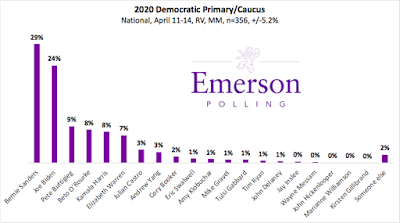 On April 15, just prior to Joe Biden’s entry into the race, Emerson College Polling released their Democratic primary contest report. Two things to note before we go further.

First, the poll of the Democratic primary shows four clear tiers of candidates (see graphic above):

Tier 1 — Bernie Sanders and Joe Biden, far above the rest
Tier 2 — Buttigieg, O’Rourke, Harris and Warren, two-thirds below the leaders
Tier 3 — Castro and Yang, polling at 3%
Tier 4 — Everyone else

Tier 4, everyone else, is polling at or below the choice named “Someone Else.”

Second, the Emerson site write-up of this poll highlights everything but the striking 12-point surge by Sanders, who rose from 17% in February to 29% in April. Mayor Pete’s rise over the same period — from 3% to 9% — is their first touted takeaway. According to Spencer Kimball, the organization’s director, “[I]t looks like Mayor Pete is the candidate capturing voters’ imagination”.

Kimball is wrong twice. Mayor Pete is not the “candidate capturing voter’s imagination.” His rise from 3% in February to 9% in April is half the increase of Bernie Sanders in the same period.

What We Learned & What We Know

From all this we learned several things:

• Much of the Biden vote is also a Sanders vote, at least so far.

From the underlying polling data itself, 31% of Biden voters have Sanders as their second choice, while O’Rourke and Buttigieg together would capture another 30% of the Biden vote if Biden were out. That seems a good rough proxy for a nascent 50-50 split among Biden supporters for Radical Change vs. Return to Obama Status Quo, “nascent” because I don’t think anyone who could support Sanders would begin to tolerate Biden after she learns what Biden actually stands for. Stay tuned for Biden to shed that support.

Further, from the crosstabs Sanders and Biden are as good as tied among millennials (ages 18-29). I’d be shocked if almost all of this group didn’t turn against Biden by the time the primary is over.

It’s early yet, but if we give Sanders a conservative half of Biden’s support across the whole primary, Sanders would lead the field with over 40% popular support — a clear plurality, but not a majority. Of course, as the issues become sharpened, that could change further.

• The delegate count is the vote that matters, not the popular vote.

I’ll expand on this point later, but just as the popular vote in the general election is not the vote that matters, the popular vote in the primary is also not the vote that matters. The “pledged delegate” count will control what happens at the convention in the first round of voting. After the first round, superdelegates enter the battle, mostly on the side of re-establishing an Obama status quo.

This means that if Joe Biden, say, picks up 25% of pledged delegates in the very early California primary, then fades to almost nothing but doesn’t drop out, his California delegates will still vote for him at the convention in round one, denying those votes to anyone else. It will go like that state by state.

So if you’re a Sanders supporter, the data to watch is not his popular support, which could surge even greater by April 28, when the last of the big states votes, but his cumulative delegate count. Watch especially the delegate counts in the early races, when the sheer mass of candidates will tend to dilute any candidate’s share of the total available.

• A brief expansion of the last point: Delegate counts for Tier 4 candidates can be ignored (Klobuchar, for example, will not pull many Minnesota delegates from the other candidates), and of Tier 3 candidates only Castro, who will vie with O’Rourke for “favorite son” delegates in Texas, is likely to affect the final delegate count.

This leaves Biden, Buttigieg, O’Rourke and Harris as the chief delegate vote-splitters, since most Warren delegates are likely Sanders delegates if Warren releases them. Can Biden, Bueetgieg, O’Rourke and Harris together capture more than 50% of the pledged delegate total entering the convention? On that point the entire drama of the convention — and with it, the nomination — will turn.

After all, Sanders can “win” with a plurality on the first round and still be denied the nomination.

• Even so, watch these polls with great interest.

The sooner Sanders captures and keeps first place in popular support in a world with Biden as a candidate, the stronger his argument to voters in the early primaries that he should get the most delegates.

Also, the sooner Sanders captures and keeps majority support (50% or more) in these polls, the stronger his argument at the convention will be that superdelegates should support him on the second round or risk a rebellion among his supporters independent of what Sanders himself recommends. Such a revolt against the Democratic Party could put Trump in charge of the nation for another four years regardless of the goodness of the Democratic Party’s “compromise” or “unity” candidate.

Put simply, superdelegates need to be put on the hottest hot seat Sanders supporters can create if his candidacy is to survive a second round of voting.

The Rebellion Has Already Started

From the Department of Just Saying, here’s an expansion of that last point. The nation is already in revolt, just as it was in the 1850s before the first shot was fired at Fort Sumter. We’re sitting on a powder keg, just not a lit one.

So far the rebellion is mainly electoral. People surged for Obama in 2008 thanks to the (false, as it turns out) “Times They Are A-Changin’” paint job his campaign received from Will.I.Am and “Yes We Can.”

They surged for Sanders in 2016, then shockingly to many (but not to all) surged again for Trump, who lying through his teeth, ran on a “Sanders platform” and marched to a 304–227 Electoral College win over the quintessential status quo candidate Hillary Clinton.

The rebellion is surging again this year, once more electorally. Unless the odd or unexpected happens, unless he stumbles or is brought down, expect Sanders’ support to reach near or above 50% among potential primary voters — and expect his 2020 polling against Donald Trump to equal his dominant 2016 polling. During that primary, Sanders beat Trump in almost every head-to-head poll by a far greater margin than Clinton did.

But if the grinding machine that is the bipartisan, militarizedEstablishment denies again the people’s choice for president, look for the rebellion against it to seek electoral revenge once more only — by not voting or voting for Donald Trump.

After that, the rebellion will not be so restricted.