By Sharon Kelly, an attorney and freelance writer based in Philadelphia. She has reported for The New York Times, The Guardian, The Nation, National Wildlife, Earth Island Journal, and a variety of other publications. Prior to beginning freelance writing, she worked as a law clerk for the ACLU of Delaware. Originally published at DeSmogBlog.

On Monday, Oregon state regulators dealt a blow to the proposed Jordan Cove Liquefied Natural Gas (LNG) project, refusing to issue a state water quality certificate required by the Army Corps of Engineers, citing unresolved concerns about water pollution and the company’s failure to answer information requests from the state in a timely manner.

“This is a huge victory for clean water and healthy ecosystems in Oregon, and it will help protect our climate from dangerous fossil fuel projects,” Jared Margolis, a senior attorney at the Center for Biological Diversity, said in a statement. “The state water quality standards are intended to protect people and species from harm, and it’s clear Jordan Cove would cause incredible damage to Oregon’s waterways.”

The state decision was made without prejudice, meaning that the company can reapply.

The project’s owner, Pembina Pipeline Corp., had told investors four days before the water certification rejection that it planned to reduce its Jordan Cove spending forecast for the year to $50 million, a 50 percent reduction, and that it would hunt for partners to buy out 40 to 60 percent of its stake in Jordan Cove and the associated Pacific Connector pipeline.

“Pembina’s Management team is working to better understand this decision and its impacts and will communicate updates when appropriate,” Pembina spokesperson Tasha Cadotte told the Associated Press after the state rejected the certification.

In April, President Donald Trump signed an executive order directing the U.S.Environmental Protection Agency to reconsider whether state approval should be required for energy infrastructure projects under the Clean Water Act (drawing immediate objections from over a dozen environmental groups who argued that the move would be unlawful).

Jordan Cove has sought federal permits to daily ship more than 1 billion cubic feet of natural gas, a fossil fuel which can be worse for the climate than coal, according to multiple studies, when burned for electrical power.

Outside estimates have pegged the project’s total greenhouse gas footprint far higher, based on an assessment that includes the full life cycle of the gas shipped through Jordan Cove, rather than on-site emission alone.

It would take the state’s only remaining coal-fired power plant 15 years to create as much greenhouse gas pollution as Jordan Cove would emit in one year, that analysis found. That coal-fired power plant, the Boardman plant, is slated to close next year, and Portland General Electric announced in February that it planned to build a 380 megawatt wind, solar, and battery energy facility to power 105,000 homes to partially replace Boardman’s 575 megawatts of power.

The West Coast LNG terminal would allow gas from Colorado — much of it from fracked gas wells — and Canada to be shipped to Asia. Pembina has said it reached non-binding deals with potential buyers abroad for LNG shipped through Jordan Cove and is working to reach binding agreements.

In 2016, the Federal Energy Regulatory Commission (FERC) rejected Jordan Cove because its owner had failed to show demand for its gas in Asia by signing contracts with buyers and citing the harm to Oregon landowners and the environment. Later that year, it rejected a request to reconsider.

Pembina acquired the project in 2017 and re-applied for FERC approval.

On March 29, FERC released a Draft Environmental Impact Statement for Jordan Cove, which opened up a public comment period for the project through July 5.

Environmentalists called on the commission to reject Jordan Cove once again.

“FERC was right to reject this dangerous fracked gas export terminal last time, when FERC explained that there was no evidence showing that anybody actually wanted to buy gas from this boondoggle,” said Rhett Lawrence, Conservation Director of the Sierra Club’s Oregon Chapter. “Nothing has changed since then.”

Natural gas and LNG are both notorious for their price swings — making construction of major LNG import and export terminals, which can cost billions of dollars and take years to move from drawing board to operation, a risky prospect for investors.

Nonetheless, driven by a massive glut of gas from the North American shale drilling rush, a massive wave of LNG export projects is underway. 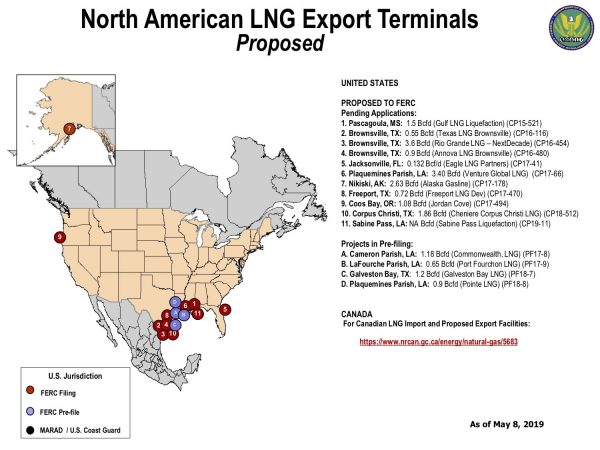 Proposed LNG export terminals in the U.S. are concentrated along the Gulf Coast. Credit: FERC

Five of the 11 projects FERC currently lists as “proposed” are larger than Jordan Cove, including the 3.6 billion cubic feet (bcf) per day Brownsville project in Brownsville, Texas, and the 3.4 bcf/day Venture Global LNGproject in Plaquemines Parish, Louisiana, which would each have more than tripled the capacity of the proposed Oregon terminal.

In April, FERC announced approval for Tellurian’s Driftwood LNG project in Louisiana — recipient of the largest local tax break in U.S.history, with a capacity of 4 bcf/day — and the Port Arthur Liquefaction Project in Port Arthur, Texas, with a 1.86 bcf/day capacity. Construction has not yet started on those two plants and three others recently approved by FERC, all the same size or larger than Jordan Cove.

Tellurian plans a final investment decision on Driftwood this year. Earlier this month, the Trump administration’s Department of Energy granted Driftwood and Sempra Energy’s Port Arthur project export approvals that would permit their LNG to be sold in Asian countries. And FERCissued a final environmental impact study for a proposed 3.4 bcf/day plant in Plaquemines Parish, Louisiana, moving that project closer to approval.

The gas industry is expected to pour $200 billion into LNG import and export facilities and associated projects between 2019 and 2025, according to energy researchers at Wood Mackenzie.

By 2030, the United Nations has warned, the world must have taken dramatic action to slash carbon and methane emissions. Last October, the UN released a report warning that within 12 years, the world must reduce its greenhouses gas pollution by 40 to 50 percent or risk breaching the 1.5 degree Celsius goal (which would carry, at minimum, impacts like significantly worse droughts, flooding, and risks to human health and the economy.)

“We are the last generation that can prevent irreparable damage to our planet,” General Assembly President María Fernanda Espinosa Garcés said in a March 28 address. “Eleven years is all we have ahead of us to change our direction. 2019 must be the year of climate action at all levels.”