Confession: I hate breakfast cereal. I grew up in a 1960s Wonderbread US home. My Mom – a teacher – was big on making sure we each had a proper breakfast before walking down the street to the bus stop and catching the bus to school.

But I simply hated all the options on offer: usually some form of dried cereal, such as Kellogg’s corn flakes (or frosted flakes), or Cheerios. There’s just something about the texture of cold cereal I find repulsive – the thin flakes immediately made soggy by the addition of milk. And I didn’t like the alternative, oatmeal, either – no matter how much sugar or maple syrup I was allowed to add.

Another problem: to this day, I don’t like to eat shortly after I wake up. And the way my childhood schedule was set, I would sleep in ’til the last possible second, and then scramble to get ready for school. I simply wasn’t hungry for anything a half hour after crawling out of bed, no matter what dire penalties Mom threatened if I didn’t choke down some breakfast.

Reviewing the latest Environmental Working Group study on glyphosate residues in children’s cereals, I was surprised to see that the same cereals we had on our table in the 1960s remain big sellers today.

Now, I’ve moved on, and enjoy breakfast – which I usually eat three or four  hours after I awaken.  If I’m preparing it myself, breakfast is some fruit with yoghurt (whatever’s in season), or some version of shakshuka (red, green, I have many ways of making it). Or a toasted cheese sandwich (with avocado, tomatoes, or caramelised onions). Occasionally a giant rosti or some potato pancakes. Or sometimes, something left over from the night before – as long as I don’t have to eat straightaway after rising, I make no distinction between “breakfast” and other foods.  If traveling, I eat whatever the local standard might be: pho in Vietnam; congee in China; olives, cheese, fruit in Turkey; ful medames in Egypt; nasi (or mie) goreng in Indonesia; poha, aloo paratha, idli, dosa, or aloo puri in India.

Yet, never, ever dry cereals –  even the best homemade granola leaves me cold.

Yesterday, the Environmental Working Group (EWG) released the latest results of tests of levels of glyphosate residues in children’s cereals, In New Round of Tests, Monsanto’s Weedkiller Still Contaminates Foods Marketed to Children.

Over the last several months, juries have awarded three sets of plaintiffs damages in successful product liability suits that alleged glyphosate causes cancer (see Glyphosate Use Surges in Midwest, Lawsuits Mount: What Will the Supremes Say? and EPA Says Glyphosate Is Safe, But Lawsuits Loom and Bayer’s Woes Mount). Bayer  – which acquired Monsanto in August 2018 and assumed its glyphosate-related legal liabilities – has been the losing defendant in each of these three actions. More than 13,000 actions remain pending, and each successful jury award draws in more potential plaintiffs.

Major food companies like General Mills continue to sell popular children’s breakfast cereals and other foods contaminated with troubling levels of glyphosate, the cancer-causing ingredient in the herbicide Roundup. The weedkiller, produced by Bayer-Monsanto, was detected in all 21 oat-based cereal and snack products sampled in a new round of testing commissioned by the Environmental Working Group. All but four products contained levels of glyphosate higher than what EWG scientists consider protective for children’s health with a sufficient margin of safety.

The new tests confirm and amplify EWG’s findings from tests in July and October of last year, with levels of glyphosate consistently above EWG’s children’s health benchmark. The two highest levels of glyphosate were found in Honey Nut Cheerios Medley Crunch, with 833 parts per billion, or ppb, and Cheerios, with 729 ppb. The EWG children’s health benchmark is 160 ppb. 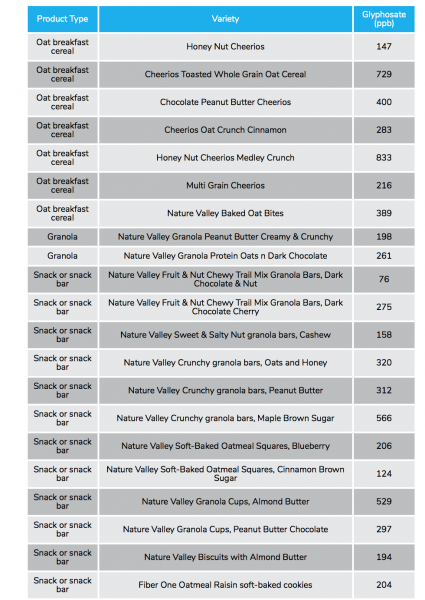 For corn and soybeans, glyphosate is typically used as a weedkiller. With oats, the chemical is used as a desiccant, killing the crop, and allowing for easier harvesting.

CBS reports in Cheerios, Nature Valley cereals contain Roundup ingredient, study finds, that General Mills makes all 21 products tested ( including six varieties of Cheerios and 14 of General Mills’ Nature Valley products [Jerri-Lynn here: My youngest sister, on being asked by my even younger brother, once defined prison as a place where all you could eat was cabbage and peas; my six-year old self would have said that a good definition of hell would be a place where all you could eat was six varieties of Cheerios.]

The company does not seem to be bothered by the EWG findings, and instead asserts:

General Mills said food safety is a “top priority” for the company, which said it’s working to minimize the use of pesticides on the ingredients it uses. “Most crops grown in fields use some form of pesticides and trace amounts are found in the majority of food we all eat,” the company said in an emailed statement. “Experts at the FDA and EPA determine the safe levels for food products,” which it adheres to, as well as farmers that grow the crops, it added.

The Environmental Protection Agency (EPA) has “a far higher threshold for glyphosate content, ranging from 0.1 to 310 parts per million, rather than per billion” used by the EWG, according to CBS.

The EWG disputes the EPA’s standard, and has called for the EPA to return to a previous, stricter, standard:

All but one of the tested products contained glyphosate at levels higher than what EPA previously allowed on oats, in 1993. EWG’s petition, currently under consideration by EPA, calls on the agency to return to its health-protective 1993 standard. But it could take years for EPA to act, and the agency has been caught colluding with Monsanto to promote the claim that the chemical is safe.

Far be it for me to begrudge anyone the occasional bowl of Cheerios (as long as I don’t have to eat them).

“I think a small amount of concern and scrutiny is appropriate,” [Jamie Alan, an assistant professor of pharmacology and toxicology at Michigan State University] says. “While the EWG and EPA both have levels they consider ‘safe,’ we really don’t understand the consequences that ingesting this amount of glyphosate will have.”

Alan says it’s “reasonable” to look for organic alternatives to big-name oat cereals and products, which are much less likely to contain glyphosate. However, if you or little ones in your life can’t do without a bowl of Cheerios here and there, you’re probably okay. “It’s not very likely that this will have long-lasting deleterious effects,” Alan says. “The glyphosate is there, but it is in relatively small amounts.” [emphasis in original]

Unfortunately, I disagree with Alan: I think that the real problem is the approach we take to that which we just don’t know.

To reiterate what Alan says – “While the EWG and EPA both have levels they consider ‘safe,’ we really don’t understand the consequences that ingesting this amount of glyphosate will have.”

If that’s indeed the case, shouldn’t we just say no to untrammelled use of this chemical? Particularly for uses – such as as a desiccant to make harvesting easier –  that aren’t crucial to ensuring an adequate food supply.