A new study from the Crowther Lab at the Swiss Federal Institute of Technology in Zurich published in Science (paywalled, but here is the original) has come out with a recommendation for reforestation as a (partial) solution to carbon capture. The report has gotten a lot of great press — “Stop building a spaceship to Mars and just plant some damn trees” is perhaps the most overheated headline, although the article is good — but there are issues. One issue is that the method of reforestation[1] — plantations or, for want of a better word, natural — matters. Finally, there are issues about how and where to appropriate the land, much of which is currently being deforested by powerful business concerns, and some of which is already occupied by indigenous peoples. Let’s look at each of these issues in turn, starting out with the Science report.

The restoration of trees remains among the most effective strategies for climate change mitigation. We mapped the global potential tree coverage to show that 4.4 billion hectares of canopy cover could exist under the current climate. Excluding existing trees and agricultural and urban areas, we found that there is room for an extra 0.9 billion hectares of canopy cover, which could store 205 gigatonnes of carbon in areas that would naturally support woodlands and forests. This highlights global tree restoration as our most effective climate change solution to date. However, climate change will alter this potential tree coverage. We estimate that if we cannot deviate from the current trajectory, the global potential canopy cover may shrink by ~223 million hectares by 2050, with the vast majority of losses occurring in the tropics. Our results highlight the opportunity of climate change mitigation through global tree restoration but also the urgent need for action.

The following figure shows the mapping: 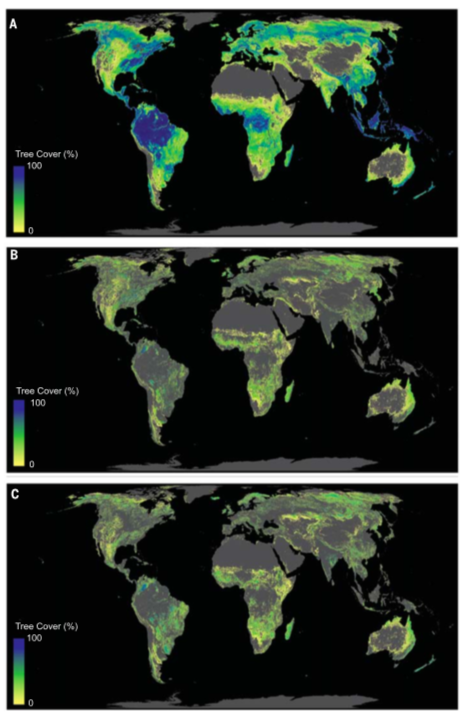 The caption for the figure:

Essentially, the study is an inventory using sophisticated GIS techniques.

Reforestation is a Partial Solution

565 gigatons — Scientists estimate that humans can pour roughly 565 more gigatons of carbon dioxide into the atmosphere and still have some reasonable hope of staying below two degrees.

Since CO2 emissions are still rising, we could still run off the 546 gigatons runway, even if we could take 250 gigatonnes out of the equation instantly. (Forests take time to grow; even secondary forests in the tropics take a decade.)

So I find the excitability embodied in this tweet a little irritating:

Brilliant new research showing how much carbon can be sequestered by reforestation around the world. I suggest that everyone who has a #bullshitjob – or no job – should have the opportunity to switch to tree-planting until we hit the full 1.2 trillion. https://t.co/jwX03VTjex

Further, the Crowther abstract is carefully, even gingerly, worded:

..among the most effective strategies for climate change mitigation…

That does not say that reforestation is the best, or the only effective strategy[2]. Besides overexcitability, I’m irritated by our collective inability to integrate and sum a collection of strategies to bring us to the required total of reductions (among them necessarily industrial policy; see NC here).

Although this issue is covered in Crowther, the nuance is lost in the press coverage. From Nature, “Restoring natural forests is the best way to remove atmospheric carbon”

[P]lantations are much poorer at storing carbon than are natural forests, which develop with little or no disturbance from humans. The regular harvesting and clearing of plantations releases stored CO2 back into the atmosphere every 10–20 years. By contrast, natural forests continue to sequester carbon for many decades

Protecting land from fire and other human disturbances allows trees to return and forests to flourish, building carbon stocks rapidly to reach the level of a mature forest in roughly 70 years4. Recovery times can be accelerated by planting native species, and the area under natural regeneration expanded using legislation and incentives, such as those pioneered in Costa Rica.

However, plantations are the most popular restoration plan

In other words, if private equity goes into “reforestation”[3] in a big way — generating more overheated headlines like the one above — they’ll do so with plantations, because harvesting plantations generates profit. But profit should clearly not be the priority; meeting our carbon stock goals should be. Or so one would think.

Appropriating the Land for Reforestation

As the maps in the Crowther figure show, reforestation would take a lot of land:

In 2018, the United Nations’ Intergovernmental Panel on Climate Change, the world’s foremost authority on climate, estimated that we’d need to plant 1 billion hectares of forest by 2050 to keep the globe from warming a full 1.5 degrees Celsius over pre-industrial levels. (One hectare is about twice the size of a football field.) Not only is that “undoubtedly achievable,” according to the study’s authors, but global tree restoration is “our most effective climate change solution to date.”

Again, Crowther is aware of this, but it’s another nuance lost in the coverage. The methods that would most likely to be used to appropriate this land are uncomfortably close to the enclosures. See Kristen Lyons, “The new corporate enclosures: Plantation forestry, carbon markets and the limits of financialised solutions to the climate crisis” (PDF). From the abstract:

In recognition of the opportunities associated with climate change, the finance sector have engaged in market based activities via the acquisition of land for ecosystem services, such as biofuel production or forestry for carbon sequestration. Many of these investments are global in scope; with finance capital from the Global North directed into the acquisition of land in the global South. We take the case study of the self-proclaimed largest plantation forestry operator on the African continent, the Norwegian company, Green Resources and their Ugandan land acquisition, to explore, firstly, the claims-making associated with the expanding financialisation of land and natural resources and secondly, the new corporate enclosures engendered via such companies’ participation in the expanding carbon economy. Our findings show that investor claims regarding the economic development and environmental sustainability at the site level do not match with the lived reality of Ugandan villagers at the investment site. Whilst carbon capture is possible, it is outweighed by a suite of social and environment ills, including forced dispossession, biodiversity loss and chemical pollution.

In other words, if we use the market to appropriate the necessary land, the process of appropriation will necessarily be financialized, with (a) attendant resistance, violence, inability to meet schedule, resulting in (b) plantations, rather than forests, leading to distinctly suboptimal suboptimal performance in carbon capture.

As so often, the really interesting problems are not technical in nature, but part of political economy, that is to say part of politics, both by the current owners of the land (indigenous or no), by policy makers in the First World, and by capital[3]. I hope to return to the topic of reforestation again with more than a mere sketch.

[1] Fascinatingly, reforestation is not all a new idea; see James B. Pollack and Carl Sagan in 1991.

[2] This tweetstorm argues that the Crowther study gets the carbon cycle wrong: “Finally, the reader is left with the impression (final paragraph) that out of 300 Gt of anthropogenic C, 200 Gt can be removed by tree planting. Unfortunately, the carbon cycle doesn’t quite work this way…. When we emit 1 tonne of C, half of it is removed by the land and ocean sinks; the other half is accumulated in the atmosphere. Well, the same applies when you remove 1 tonne of C from the atmosphere, half tonne of C is released by the natural CO2 sinks. So, take half of 200 [205] GtC.” I’m putting this only in a note because I feel it’s one for the judges.

[3] Crowley, with “canopy cover,” neatly elides the distinction between forest and plantation.