It’s no longer paranoid to say that “they” are out to kill news. First it was the Internet almost entirely displacing classified ads, which had accounted for roughly half of newspaper industry revenues in the US. The Internet also turned most people save those who are now oldsters off print newspapers, even though nothing is so efficient to scan, taking with it higher subscription rates and display ads. Then Facebook and Google sucked most online advertiser revenues to themselves.

To add insult to injury, Google implemented algos hostile to smaller sites, first targeting those that did what Google deemed to be too much aggregation, like our daily Links feature. Google deemed those sites to be “low quality”. One wonders if the real issue was that they competed with Google News. Then Google downgraded sites it deemed not to be “authoritative,” whacking not only many left and right leaning sites but even The Intercept. Facebook’s parallel action was to change its search and newsfeed algos, supposedly to combat fake news, but also hurting left-leaning publishers.

Now, as the Wall Street Journal reports, many major advertisers have created blacklists, nixing ad placements that appear next to or in stories with headlines using naughty words like “bomb” that amount to a partial or total ban on news content. It isn’t isn’t just fluffy feel good brands that want to steer clear of controversy. Startlingly, even some financial services companies like Fidelity want to stay away from hot words like “Trump” even though “Trump” appears regularly in business news headlines, such as ones discussing his China trade spat, his tax cuts, his deregulatory efforts, and today, his interest in buying Greenland.

It appears advertisers just want us to take our Soma and shop rather than know about anything in the world at large. One wonders if words like “climate” and “strike” are on some blacklists. From the Journal: 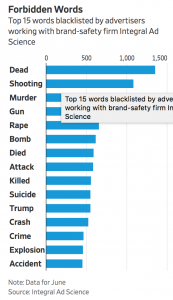 Like many advertisers, Fidelity Investments wants to avoid advertising online near controversial content. The Boston-based financial-services company has a lengthy blacklist of words it considers off-limits.

If one of those words is in an article’s headline, Fidelity won’t place an ad there. Its list earlier this year, reviewed by The Wall Street Journal, contained more than 400 words, including “bomb,” “immigration” and “racism.” Also off-limits: “Trump.”….

“Political stories are, regardless of party affiliation, not relevant to our brand,” a Fidelity spokesman said in a written statement. The company also avoids several other topics that it says don’t align with published content about business and finance…

The average number of keywords the company’s advertisers were blocking in the first quarter was 261. One advertiser blocked 1,553 words, it said.

Notice how obituaries are on the verboten list for many advertisers. So would be articles discussing deaths of despair and many on the opioid epidemic.

The Journal points out that advertisers have long had blacklists, but in the past they weren’t as widely used and were narrower. But after a 2017 Times of London story exposed how many advertisers were running ads on YouTube channels with hate speech thanks to automated ad buys on online ad marketplaces. Up sprung a new mini-industry of “brand safety” firms that have generated blacklists so far-reaching as to imperil already-strained publishers:

Online news publishers are feeling the impact, from smaller outlets to large players such as CNN.com, USA Today-owner Gannett Co., the Washington Post and the Journal, according to news and ad executives.

Consumer-products company Colgate-Palmolive Co., sandwich chain Subway and fast-food giant McDonald’s Corp. are among the many companies blocking digital ad placements in hard news to various degrees, according to people familiar with those companies’ strategies.

Some companies are creating keyword blacklists so detailed as to make almost all political or hard-news stories off-limits for their ads. “It is de facto news blocking,” said Megan Pagliuca, chief data officer at Hearts & Science, an ad-buying firm owned by Omnicom Group Inc.

The Guardian said some advertisers have banned the word “Brexit”. Advertisers like Subway claimed they wanted their ads to be associated with things like “positivity”. I don’t think eating fast food that makes dodgy pretenses about being healthy is positive, but to each his own.

Google won’t place ads with stories that might bump up against its commercial interest…which includes a wide swathe of business reporting:

Alphabet Inc. ’s Google has a long keyword blacklist that contains more than 500 words and phrases, including “privacy,” “federal investigation,” “antitrust,” “racism,” “FBI,” “taxes,” “anti-Semitic,” “gun control” and “drought,” according to a copy reviewed by the Journal. The list has made it difficult for at least one news publisher to place Google ads on its site, a person familiar with the matter said.

And some advertisers are effectively rebelling against idpol:

Some digital publishers said the push for brand safety amounts to indirect censorship. Vice Media told advertisers at a presentation in May that it will no longer allow brands to block 25 words, including “bisexual,” “gay,” “HIV,” “lesbian,” “Latino,” “Middle Eastern,” “Jewish” and “Islamic.”

There is a bit of an arms war underway, with publishers trying to persuade advertisers that there screens are too crude:

CNN.com and Gannett are creating technology intended to give advertisers a better way to gauge if a news story is controversial.

CNN.com said it is testing a new product dubbed SAM, for Sentiment Analysis Moderator, that uses machine learning to score its site’s content for whether it will make readers feel “mostly negative,” “somewhat negative,” “neutral,” “somewhat positive” or “mostly positive.”…

The New York Times and USA Today also have been using sentiment analysis to help brands advertise in news articles that may have a positive or optimistic sentiment.

But you can see where this is going. News will have to be massaged to have a high enough “feel good” quotient. How soon will we see AI-based editing that will flag negative-sounding content and send it back to the author for a rewrite?

And what does it say about the US as a society that we tolerate only positive emotions? Every major religion is based on the inevitability of suffering. Trying to deny that that is fundamental to the human condition is a fast track to neurosis.

But more immediately, this development shows that advertisers and Silicon Valley are terrible parasites. An effective parasite has a symbiotic relationship with its host. Advertisers and the tech platforms depend on content, yet they seem out to kill it. Perhaps Facebook is happy to get by with no news whatsoever, but how do the elites function if the news business continues to shrivel? How do they have even a remote handle on what is going on outside their PR bubbles? They may be happier that way, but so to were French nobles in 1788.