I sincerely wish I had the energy to write a post that would give generalist readers more background on the money markets and how the scary-looking but not-a-systemic issue of the Fed funds rate shooting up several times this week. Instead, I hope this piece will make a few simple points without being simplistic. And I encourage expert readers to pipe up with observations and any quibbles.

However, the bottom line is the most serious implication of the Fed having to race in repeatedly to apply liquidity is that the central bank doesn’t look terribly competent. The Fed was blindsided by the liquidity crunch, when it shouldn’t have been, or at least not to this degree. And it appears not to have understood in how some of its post-crisis measures might wind up making the withdrawal of liquidity a rockier process than it might otherwise have been.

Specifically, the Fed injected emergency cash via using its repo facility for the first time since the crisis, which had some glitches that held up its first use on Tuesday morning by a half hour. This performance looked even more shambolic after the Fed had ignored the first spike on Monday, and its inaction proved to be not the best response. The monetary authority has had to rinse and repeat every day for the balance of the week, and will continue on Friday.

Mind you, it’s not unreasonable for laypeople to wonder if these market moves were a harbinger of something serious, since the repo markets did seize up during the crisis, plus the Fed repeatedly failed to recognize how bad the rot in the financial system was. Remember Bernanke’s “Subprime is contained” posture of March 2007? Or the Fed and Treasury going into “Mission Accomplished” mode after the Bear bailout, when the worst was yet to come?

Earlier in the week, the official story was that the cash scarcity was the result of quarterly corporate tax payments, which suck cash out of banks, along with bigger than usual Treasury auctions suck more cash out of banks. These would normally be short-term pressures. However, this is occurring against a backdrop of the Fed shrinking its balance sheet by letting maturing bonds run off, which means there is less liquidity in the financial system and in particular, banks have less in the way of reserves. Bear in mind that it is the central bank, and not individual banks, that determine the level of overall reserves.

Today, the Financial Times reports that there are additional forces in play which means that the pressures on the money markets may not abate so quickly:

Several strategists at major banks that act as trading counterparties for the Fed said the central bank should pump more regular bursts of funding into the system. This is particularly important before the end of financial quarters and years, analysts said, because of the risk of further bouts of cash outflows sparking renewed market dislocations…

In particular, some bankers have highlighted the end of September, which is typically a more strained time for the repo market as banks pull back and reduce the size of their balance sheets ahead of an important regulatory reporting date on the last day of the July to September quarter.

One has to wonder why the central bank didn’t see this coming. Is it an unintended side effect of how the Fed has changed the way it manages short-term rates? Before, it did so via open market operations in the Fed funds market. It changed its approach to paying interest on reserves, and using that rate to influence the Fed funds rate.

The Congressional Research Service explains some of the implications of this change as the Fed shrinks its balance sheet:

The basic challenge to doing so is that the Fed cannot effectively alter the federal funds rate by altering reserve levels (as it did before the crisis) because QE has flooded the market with excess bank reserves. In other words, in the presence of more than $ 1trillion in bank reserves, the market-clearing federal funds rate is close to zero even if the Fed would like it to be higher….

The Fed intends to ultimately reduce the balance sheet until it holds “no more securities than necessary to implement monetary policy efficiently and effectively.”53The Fed has stated that a balance sheet that is consistent with this goal will be larger than it was before the crisis. In part, that is because other liabilities on the Fed’s balance sheet are larger—there is more currency in circulation now thanthere was before the crisis, and the Treasury has kept larger balances on average in its account at the Fed. But the balance sheet is also significantly larger because the Fed decided in January 2019 to continueusingits new method of targeting the federal funds rate even after normalization is completed. Under the new method, the federal funds rate is not determined by supply and demand in the market for bank reserves, and the Fed would prefer to maintain abundant bank reserves so that it does not have to use open market operations to respond to changes in banks’ demand for reserves. By contrast, if it had gone back to the pre-crisismethod of targeting the federal funds rate, only minimal excess reserve balances would be necessary (but perhaps more than before the crisis), so its balance sheet could have beenmuch smaller.

It may simply be an artifact of the drafting, but this analysis makes it sound as if the Fed has an antipathy for open market operations, when the Fed’s money market desk was once formidable as well as a source of market intelligence. Did the degrading of the role of the money market traders result in information loss? It certainly didn’t help that key people left early in the summer and have yet to be replaced. From Reuters:

Complicating matters is the recent departure of two key markets experts, leaving vacancies at the New York Fed that some worry may have slowed down the U.S. central bank’s response to the volatility this week.

The two market-focused officials abruptly departed in June: Simon Potter, who oversaw the New York Fed’s trading desk, and Richard Dzina, who ran the bank’s financial services group. To date, neither has been replaced, leaving the central bank without permanent leadership in a key part of its operations.

An additional reserve-destabilizing post-crisis move arguably falls in the “What were they thinking?” category. From the Financial Times’ comment section:

before the GFC and the QE, whenever quarterly taxes were collected, they were transferred to Treasury Tax and Loan Accounts that the Treasury held at all the major commercial banks. The accounting was simple: taxpayers accounts at JPM, say, were debited by the amount of tax that the taxpayers were paying and the TT&L account of the Treasury at JPM was credited. No movement of reserves. Nothing else to worry about.

When banks were awash with reserves due to QE, the Treasury stopped using its TT&L accounts. The accounting for a tax payment would then be as follows: customers of JPM, say, who had a tax bill to pay would have their accounts at JPM debited, JPM’s reserve account at the Fed would be debited and the Treasury’s account at the Fed would be credited. This would involve a huge movement in reserves from banks to the Treasury, but because banks had so many reserves, it wasn’t an issue.

Now, with QE having been partially unwound, such that the total reserves held by the banking system has reduced, together with increased demand from bank customers for banknotes (that also involves debiting banks’ reserve accounts), combined with the Treasury leaving its TT&L accounts dormant, a big movement of reserves from the banks to the Treasury upon a quarterly tax payment has caused a shortage of reserves within the banking system. The banks still have way more reserves than they are required to hold, but the amount they have been left with after the tax payment relative to what they would like to hold has fallen, leading to the Fed offering to add reserves to the banking system via overnight repos.

Finally, in August, Izabella Kaminska at FT Alphaville reported on a “liquidity black hole” that the Fed may not be factoring into how it goes about shrinking its balance sheet. From her post:

It’s been a while since we checked in on what’s percolating through the mind of financial-plumbing specialist Zoltan Pozsar at Credit Suisse….

Here’s the gist from the opening of his latest note (with our emphasis, oh, and RRP stands for reverse repurchase agreement):

The FOMC should forget about r* for the moment and focus on Sagittarius-A* – the supermassive black hole at the center of global dollar funding markets.

The black hole is the foreign RRP facility, which has seen close to $100 billion of inflows since the beginning of the year.

The driver of these inflows is the curve inversion, and the longer the inversion persists the more inflows will follow. The trade war is also contributing to the inflows – given the inversion, as foreign central banks weaken their currencies they “buy” the foreign RRP facility and not Treasuries like in the past.

It’s an important point because even if the Fed were to stop tapering (a monetary tightening measure which sees central banks absorbing the proceeds of maturing Treasuries rather than reinvesting them in further asset purchases), tightening would continue for as long as the uncapped foreign RRP facility attracts inflows. Which it would, says Pozsar, because of the curve inversion.

He predicts such inflows could eclipse $200bn by the year’s end with the consequence of pricing Treasury supply out of the market. 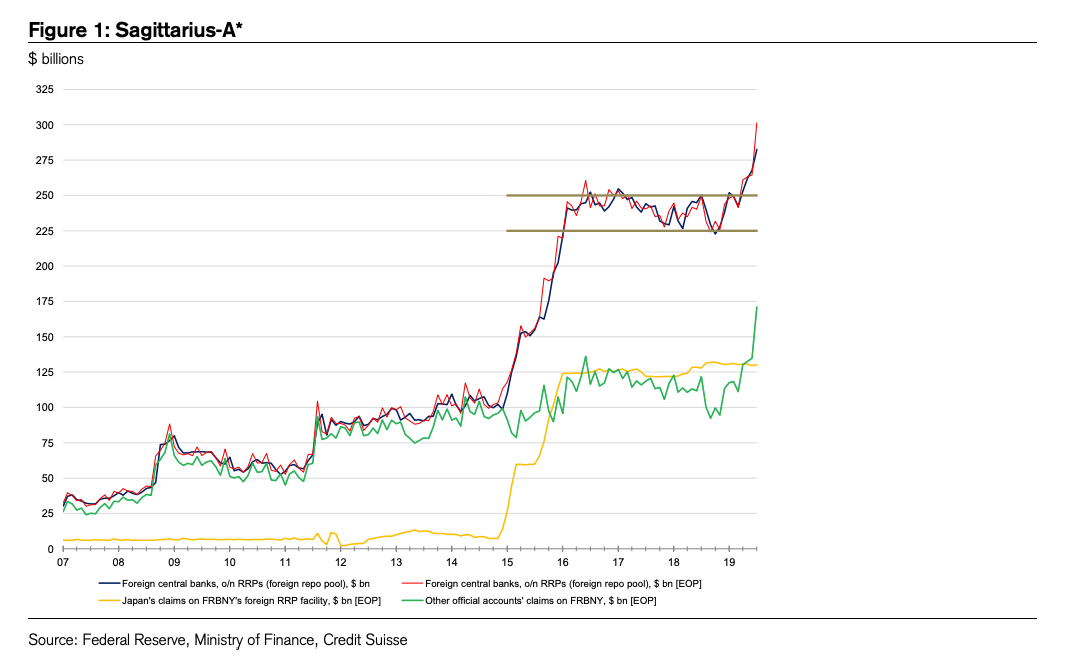 This suggests the Fed may have overdone its hiking cycle, something that now can only be fixed with rate cuts. (Which incidentally also means, eek, Donald Trump might be right about Powell’s policy.)

The claim about “pricing Treasury supply out of the market” is histrionic, but that doesn’t invalidate Pozsar’s broader point about the RRP being a major liquidity drain when the yield curve is inverted.

It looks worrisomely like the Fed hadn’t thought through the second-order consequences of its post-crisis changes, and some of them are now coming back to bite. No wonder some bankers are calling for the Fed to institute a two-week repo facility. Even though the Fed has the means to tamp down these problems, the failure to do so expeditiously and well is a dent to its credibility.