Readers will remember[1] that when Warren released her “pay for” plan, I wrote:

There are two big problems with Warren’s “plan” (A) the “head tax,” and (B) dependencies….

(B) Dependencies. Warren, to “pay for” #MedicareForAll, is going to have to ramp up IRS enforcement (remember how popular the mandate was?), pass immigration reform, and take away a slush fund from the Pentagon. In politics, as in programming, “The cheapest, fastest, and most reliable components are those that aren’t there.” If you really want #MedicareForAll to pass, why create a combinatorial explosion, a veritable hairball of political problems that will get in the way of its passing?

Of course, moving to this kind of system will not be easy and will not happen overnight. This is why every serious proposal for Medicare for All contemplates a significant transition period. In the weeks ahead, I will propose a transition plan that will specifically address how I would use this time to begin providing immediate financial relief to struggling families, rein in out-of-control health care costs, increase coverage, and save lives. My transition plan will take seriously and address substantively the concerns of unions, individuals with private insurance, hospitals, people who work for private health insurers, and medical professionals who worry about what a new system will mean for them. It will also grapple directly with the entrenched political and economic interests that would spend freely, as they have throughout modern American history, to influence politicians and try to frighten the American people into rejecting a plan that would save them thousands of dollars a year on premiums and deductibles while making sure they can always see the health care providers they need with false claims and scare tactics.

Which is all fine — accepting the premise that “the concerns of unions, individuals with private insurance, hospitals, people who work for private health insurers, and medical professionals” have never been taken seriously before — but we’ll need to see how long that transition period is, won’t we? Given that #MedicareForAll is a “long-term”[2] goal?

In comments I was more direct:

[I]t won’t pass, because Warren tied #MedicareForAll to all these other dependencies.

Now we have Warren’s promised “transition plan,” and it makes the same strategic choice: Warren reduces #MedicareForAll’s chances of passage by introducing needless dependencies. Since this is a short post, I won’t focus on detail[3]. Here is the essential part. From Warren’s “My First Term Plan for Reducing Health Care Costs in America and Transitioning To Medicare For All“:

So, when you strip away all the verbiage, Warren plans two pieces of legislation: Legislation for a public option in 2021, and legislation #MedicareForAll after the midterms, in 2023. (I think we can safely say that “no later than my third year in office” means “after the midterms,” because I doubt Warren plans to pass major legislation in 2022, after having just passed major legislation in 2021.) Here is why having two bills for the transition period — Sanders has one bill, that also includes a transition period — introduces an unmotivated[4], needless dependency.

First, the political calendar. Everybody knows that Presidencies have the most “political capital” at the start of their terms. Thereafter, their political capital declines, especially after the midterms. So Warren proposes to pass the weakest bill, the public option, when she is strongest, and then the strongest bill, “true” #MedicareForAll, when she is weakest. How does that make any sense? The only reason I can think of for choosing to make #MedicareForAll into a separate piece of legislation — remember, this is a bill Warren endorsed! — and then punt on it ’til after the midterms is that you don’t really want to pass it.

Second, the theory of change. Both pieces of legislation — Warren’s public option stopgap, and #MedicareForAll — will be ginormous political battles. If Warren thinks she can win either one by getting everybody “at the table,” she’s delusional; power concedes nothing without a demand. #MedicareForAll is not on the agenda because Warren and her professional colleagues decided to put it there, or even because Sanders ran on it in 2016. #MedicareForAll is on the agenda because a movement put it there. So, Warren is asking that movement to die on two hills: First, in 2021, to die on the hill of a program in which they do not believe, the public option. Then, to die on the hill of the program in which they do believe, #MedicareForAll, after the midterms. Not only will Warren be weak after the movement, but the movement itself will be weak, because it already died, as it were, on the first hill. A good commander doesn’t waste their troops. (Of course, #MedicareForAll may never come up, in which case, betrayed, the single payer movement might simply vanish from the scene. Every cloud has a silver lining!)

Kip Sullivan explains the history at PNHP. The whole post is worth reading, but here is the essential part:

There have been three cycles of health care reform in the last half century – 1970-73, 1992-1994, and 2007 to date. At the dawn of each cycle, single-payer legislation had already been introduced. But early in the cycle, single-payer legislation was “taken off the table” (to quote a statement Sen. Max Baucus now wishes he had never made). Each time the Democratic leadership chose instead market-based proposals that had no track record and no evidence to support them. Each time they favored reform deemed more “politically feasible” than single-payer because it left the insurance industry in place. In all three cycles, the alternative, market-based proposal was promoted by one or two policy entrepreneurs (that is to say, it wasn’t an idea that bubbled up from the grassroots).

Single-payer legislation was the first out of the chute during the 1970-1973 cycle. In January 1970, Sen. Ted Kennedy introduced what we would today call a single-payer bill. But Kennedy and other leading Democrats quickly abandoned single-payer in favor of a theory about cost containment called the “health maintenance strategy.” This strategy revolved around a new-fangled type of insurance company proposed by a Minnesota physician named Paul Ellwood that Ellwood called the “health maintenance organization.”… Thus was the world’s first HMO industry born. As we all know now, the HMO experiment failed.

Late in 1992, candidate Bill Clinton was persuaded by representatives of a group Ellwood helped form, the Jackson Hole Group, to support something called “managed competition.” … The 1994 cycle ended with the death of Clinton’s bill in September 1994, and the unraveling of similar managed competition legislation enacted in Minnesota and Washington.

The cycle we’re in now [2007-2010] bears many similarities with the last two cycles. When this cycle began (2007 is as good a year to pick as the first year of this cycle, although that is somewhat arbitrary), single-payer legislation was better positioned than ever before to be taken seriously by Democrats. Single-payer bills had been introduced in several states as well as the US House (Sen. Bernie Sanders would introduce a single-payer bill in the Senate in 2008). Polls were showing that two-thirds of Americans and 60 percent of doctors support single-payer (or “Medicare for all”) legislation.

But once again an articulate policy entrepreneur appeared on the scene to sell a market-based alternative to single-payer that would leave the insurance industry at the top of the health care food chain, and once again the Democratic leadership fell for it[5]. This time the entrepreneur was not Paul Ellwood. This time the policy entrepreneur was Jacob Hacker, a professor of political science at Berkeley. Just as Ellwood and the Jackson Hole Group had before him, Hacker said enhanced “competition” among insurance companies was the solution to the health care crisis. (The name of Hacker’s latest paper is “Healthy competition.”) This time enhanced competition would not come from “managing” competition,

We are now in the fourth cycle. We have seen this movie before. We have only to look at history to know how it ends. This time Warren, or whichever unknown policy entrepreneur wrote her white paper, is promoting a market-based option, taking on the role of Hacker and Elwood. Does anybody seriously believe, looking at the history, that after Warren’s first bill for the “public option” passes, if indeed it does, that liberal Democrats will do anything but sigh and never pass the second, “true” #MedicareForAll bill, because it’s just not “politically feasible”?

So, both Warren’s pay-for proposal and her transition plan have the same problem: Both have unmotivated dependencies — immigration reform and two pieces of legislation, respectively — that have the effect of making #MedicareForAll likely to fail. (Sanders’ plans do not have these dependencies.) Charitably, that’s because Warren has terrible politlcal judgment; and the charitable explanation may be true, because Warren does, in fact, have terrible political judgment. Less charitably, Warren wants #MedicareForAll to fail. She would not be the first liberal Democrat to want that.

[1] Readers will also remember that I looked at the “Health Care” page on Warren’s campaign site, and concluded: “Still crawfishing on health care. She should come out with, well, a plan. Say, to support either Jayapal’s bill or Sanders’ bill?” and that “I assume that Warren’s horrid, crawfishing campaign page on health care will shortly be cleaned up.” No such luck. I looked at the changes to the site on the Wayback machine, and then ran a diff on the current page versus the page that I looked at, from September 12. There was a single correction, a typo (two periods where one was meant). I suppose that means that the campaign page, the pay-for proposal, and the transition plan are all consistent with each other, and always have been.

[2] In my earlier piece, I parsed Warren’s verbiage to try to figure out what “long-term” means. I concluded it meant a maximum of two Presidential cycles. Now “long-term” means two years. So go figure. Or maybe “long-term” is there as weasel wording to protect Warren when the second, true #MedicareForAll plan fails to pass after the mid-terms. Who can tell? I do doubt, however, that Warren in professorial mode, involved in matters like curriculum development, could possibly consider two years “long-term.” Two years is barely time to set up a committee. 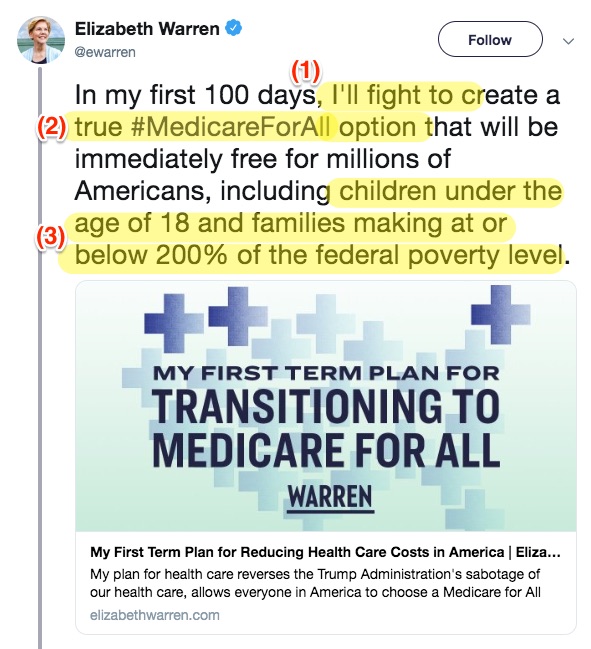 (1) “Fight for” is classic liberal Democrat rhetoric. Always fighting, never winning! (2) #MedicareForAll that is (3) an “option, means-tested, and age-limited is not “for all,” duh. And “true” is the perfect [chef’s kiss] on the whole concoction.

[4] Here is Warren’s absurd justification: “By this point, the American people will have experienced the full benefits of a true Medicare for All option, and they can see for themselves how that experience stacks up against high-priced care that requires them to fight tooth-and-nail against their insurance company.” Warren must assume that none of us have parents on Medicare, or that we’re really dumb. After all, single payer advocates (controversially) chose “Medicare for All” because Medicare had good branding, based on its performance. In any case, pass one bill and then use people’s experience to amend and improve it. There’s still no need for a second piece of legislation.

[5] “Fell for it” is being extremely charitable.