The augmentation of the complexity and intensity of the field of intelligent life –Ursula Le Guin, The Left Hand of Darkness

Yes, it may be snowing and bitterly cold where you are — or, alternatively, you may be getting that miserable kind of rain that happens slightly above freezing where big drops somehow get under the hood of your anorak — and it’s certainly still more and more depressingly dark day by day — the winter solstice, when the light turns upward, is still almost a month away, falling on December 22 this year — but you can still fight back against the cold and the dark: You can order seed catalogs![1] And then, you can plan your garden!

Most of what follows is from email that alert reader pq threw over the transom, and which I’ve lightly edited. I found it really inspiring (and also wildly ambitious by my standards; I’ve been w-a-a-y more incremental, mostly because it took me awhile to figure out what I really wanted. Tomatoes were, of course, my gateway plant, but I ended up abandoning vegetables entirely in favor of flowers). The photos are also by pq; I had asked for a photo, and this was pq’s response:

[pq:] I don’t think the NC community’s expert gardeners are going to be very impressed with any single photo. The awesomeness is in the evolution of a neglected, left-for-dead side yard of a rental building into a living, breathing space with butterflies, bees, fat earthworms, and toads, not to mention flowering plants. The space is about 11 x 38.5 ft. The garden idea started forming when a friend gave me some root divisions of bleeding heart last fall. I needed a place to put them and asked the landlord if I could plant them along the fence.

Here is the “neglected, left-for-dead side yard”: 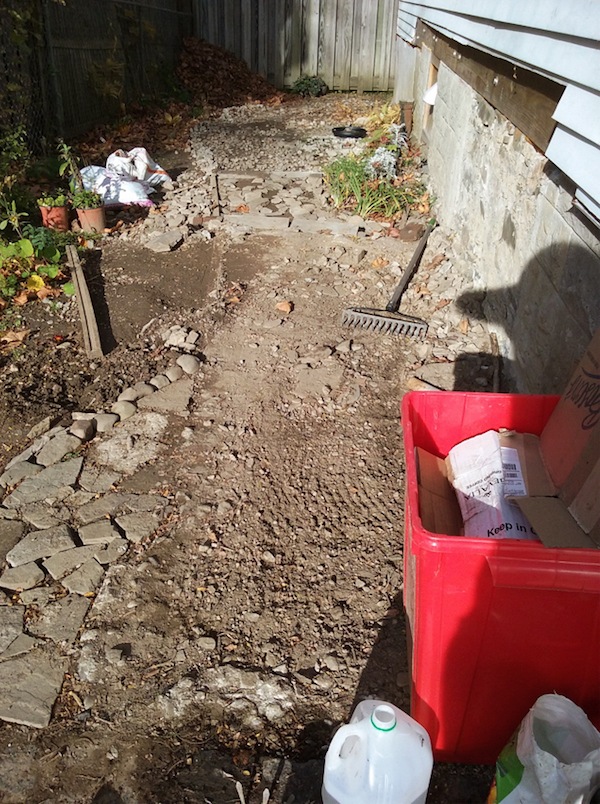 Here are the bleeding hearts that started it all: 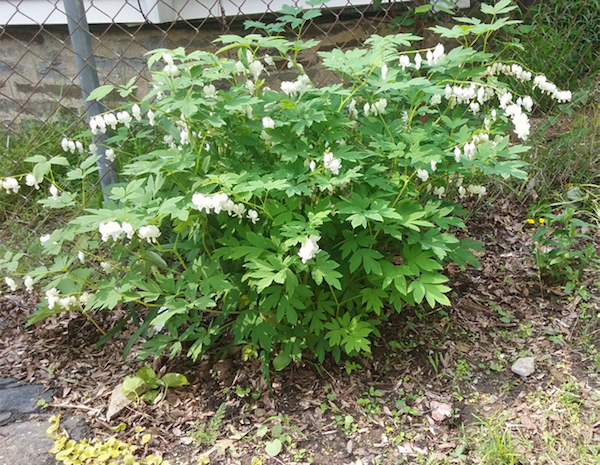 [pq:] When they came up huge and luxurious in the spring, I asked if I could put more plants along the fence. I dug a border of about a foot and a half and began yanking out weeds. The root systems were impressive. They had grown so thick and entangled that they effectively had formed an impermeable barrier under which nothing could survive. They even were suffocating themselves. There were no earthworms. I became obsessed with weeding. Hours at a time, day after day.

I have never been obsessed with weeding; I am a lazy gardener. But I do like a project of turning a patch of nothing into soil by ripping out useless roots.

[pq:] Then I began turning the soil. The ground along the fence had benefited some from years of accumulated leaf deposits, but starting about two feet out, I hit hard clay. And rocks! In some areas, whole layers of what looked like river rock, mixed with shale and some weird composite stuff. When I mentioned it to the landlord, he knew all about it. The previous owner (his father-in-law) had built a deck, with a big stone staircase, but the deck was rotting into structural supports of the building and threatening to bring down the entire house (built in 1901). My landlord got a crew together, tore out the deck and staircase, and installed a new support beam. And guess what they did with all that rock?

As I unearthed rocks, I separated them into piles according to size and shape and began thinking about what I could do with all this free landscaping material. 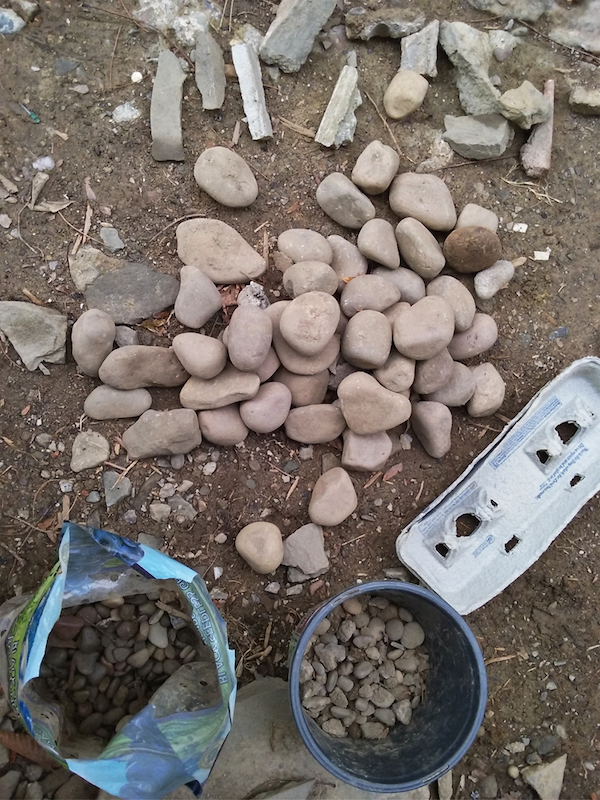 [pq:] I had to have a path through the garden, not only to tend the plants, but to allow my downstairs neighbor to access the garbage dumpster. Initially, I thought I’d get some mulch and make a path like in a photo sent in by an NC reader. But as the rock piles grew, it was a logical conclusion that they were meant for the garden path. Configuring them was another story, though. I ended up spending more of the summer and early fall laying rocks than anything else.

This is the permaculture principle of using what comes to hand. In my first couple of years, I put in a number of rock borders. Then over time, as rocks will do, they sank into the soil and disappeared! It was always a pleasure, when digging to create something new, to discover one of my rocks. Then I could repurpose!

[pq:] I did have lots of plants, though. I got many of them for free, some from neighbors, some from the roadside, including milkweeds. I regularly visited the rescue plant section at the back of Lowe’s garden center[2]. I also started some from seed, found in the 25-cent bin at Dollar General. I think I sent you some photos of the “wall” of nasturtiums and morning glories that I trained to climb the ugly chain-link fence separating our yard from the run-down side of the property next door. For all practical purposes, that was my “first-year” garden.

The wall of morning glories and mastershalums: [pq:] As summer ended, I faced two major challenges: 1) to build the soil, with no money; and 2) to get it all done before the first freeze. You actually provided my soil solution with your “sheeting” linkI couldn’t follow it 100 percent, as I already had some plants in the ground (being broke doesn’t help), but I had some good sources of material. I collected all the suitable cardboard my neighbors put in the recycling bins. Starting in September, leaves were free for the raking. I had a little manure and organic fertilizer from last year’s container gardening. My landlords, thrilled that they no longer had to maintain the side yard, brought me a big bin of sawdust mulch, which they get ridiculously cheap from a sawmill just outside the village. As I said, not really the “right” way to do sheeting, but much of the soil is already vastly improved since spring. Before the weather turned cold, I had to be careful not to step on all the earthworms! A fleet of bumblebees were still busy at work while I was raking leaves in late September.

(See NC here on “sheet mulch”.) I would urge that worms are the best possible soil amendment; if you didn’t have worms, and now you do, that’s a great victory. With worms and the leaves and the sawdust, I bet pq’s soil will get all nice and soft and crumbly — even, given time, the clay.

[pq:] I was struggling to stay ahead of the weather…. And then we got that blast of arctic air and the ground was frozen solid for more than a week. I may be able to work a little in the next few days, but at this point, I’m pretty much resigned to pausing until spring. Writing about it will be my winter “garden project.” I’ve attached a few photos, just to give you an idea. I never took a real “before” shot, because I did a lot of work before realizing there WAS a before. In early June, before I started, the downstairs neighbor came through with a weed whacker. That was the last time. From then on, I was the One Weed-Whacker; there were no other weed-whackers before me.

Here is a look up the garden path: 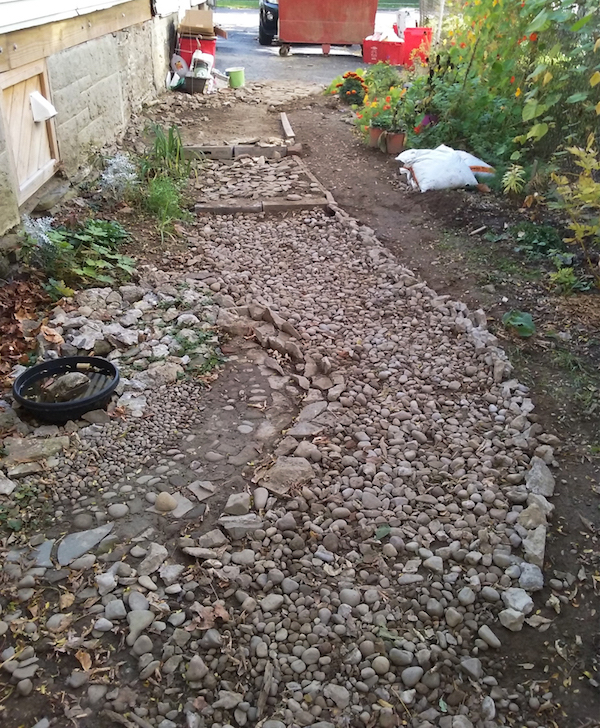 [pq:] Anyway, thank you for asking! This garden was beyond therapeutic; it saved my life. And you and the NC “Garden Club” unknowingly had a hand in it.

pq also included the plan of the garden: 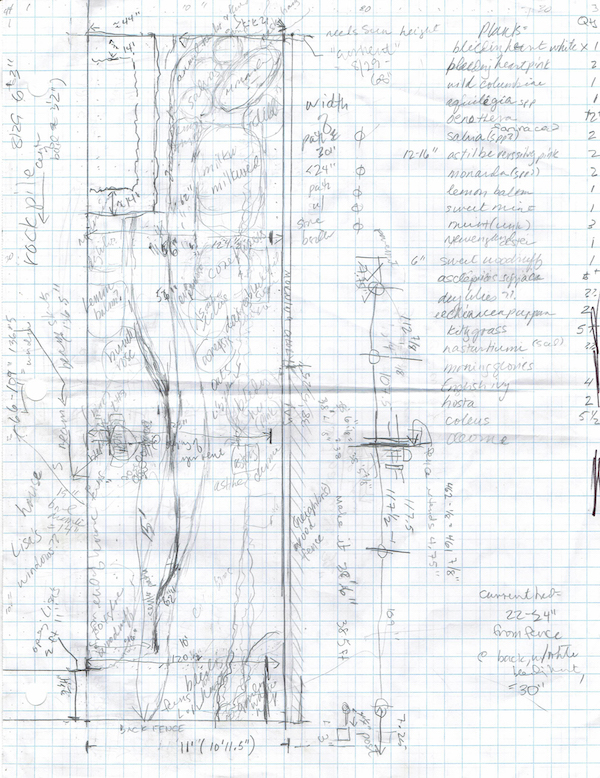 I found that touching, because I remember finding my father’s plan for a garden in the side yard, pinned to the wall of his workshop. He had the beds all laid out, but never got to it. I never did make a plan (and his plan would not have been mine).

I don’t know of I can add much to pq’s account, save to ask you to share your own experiences of gardening — or to consider starting your own, if you are in a position to do so. Something to look forward to. So order up your seed catalogs and make a plan

[1] From experience, I recommend Johnny’s Seeds and Fedco in Maine. They have excellent seeds and they are both co-ops (fruits of the back-to-the-land movement in the Sixties). I would bet there are other companies around the country with seeds that are best for your particular region.

[2] I understand the economics, but garden centers also spread disease. Be careful! I never had any bugs in my garden at all when I grew exclusively from seed. This is vegetables; flowers may be less susceptible.