Burning cash is easy; It’s quite flammable and just goes up in smoke.

Here it is in a nutshell, the philosophy of “growth at all costs.” Uber’s total revenue increased 29% to $3.81 billion in the third quarter compared to a year earlier, the company reported this afternoon. And that’s very good revenue growth. But to get this revenue growth, the company threw everything at it that it had. So, expenses increased even faster, and the operating loss ballooned.

And here is what it threw at it: Total costs and expenses soared by 33% to $4.92 billion. This includes $401 million the company paid its employees in stock-based compensation. In other words, to obtain a $969 million increase in revenues, the company spent an additional $1.2 billion.

At this rate, when expenses grow faster than revenues, there is going to be a problem trying to get to this mythic breakeven the way the company is structured now.

As a consequence of expenses increasing faster than revenues, its loss from operations soared by 45% to $1.11 billion.

It’s net loss – after interest expense, other income, losses from equity investments, and provisions for income taxes – rose by 18% to $1.16 billion, up from $986 million a year ago. 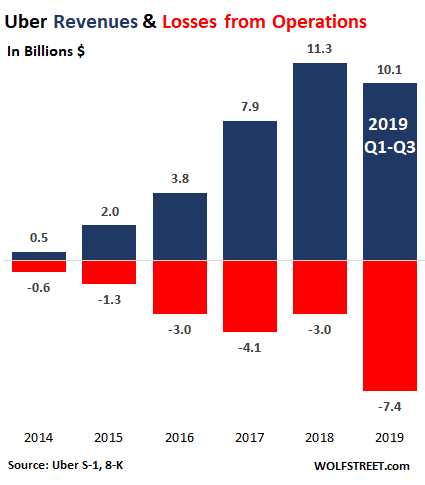 Cash flow from operations was a negative $878 million in the quarter, bringing the cash burn so far this year to $2.52 billion.

But don’t worry: it has plenty of investor-cash to burn, thanks to numerous fund-raising rounds, the cash raised during the IPO, and some monster debts. At the end of the quarter it still had $12.6 billion in cash to burn.

A big part of that cash is borrowed: Uber has $5.7 billion in long-term debt. Those creditors – despite Uber’s deep-junk credit ratings – aren’t worried as long as Uber as enough cash on its balance sheet to service and pay off the debt and a high enough a stock price to issue more shares and use the proceeds to service the debt. Creditors get very nervous when neither cash nor a high stock price is available to bail them out. So that’s what they’re keeping their eyes glued on.

Uber was founded over 10 years ago. It has about 27,000 employees – though there have been waves of layoffs this year, including another 350 folks two weeks ago. It has burned through enormous amounts of investor cash over the years. And yet, it is further away from making a profit than ever before.

In a brief interview on CNBC today, CEO Dara Khosrowshahi said the company is targeting “adjusted EBITDA profitability” in 2021. “We know there is the expectation of profitability, and we expect to deliver for 2021.”

“We haven’t finalized our planning, and it’s going to take a lot of work from a lot of folks, but we are actually targeting 2021 for adjusted EBITDA profitability for the year,” he said.

“Adjusted EBITDA” eliminates a lot of the bad stuff. Unadjusted EBITDA (Earnings Before Interest, Taxes, Depreciation, and Amortization) is a fairly standard measure of operating cash flow, not profit. Creditors use it to see if a company can make its interest payments over the near and medium term.

You’ve got to admire the guts to create something this big that burns up this much investor cash for a decade and on an ongoing basis, and that hasn’t yet figured out how to make a real profit, and apparently has no plans of doing so. Burning cash is easy; it’s quite flammable and just goes up in smoke. Building a profitable business in a competitive environment, that’s hard.

This is a holy-cow moment. Read...  Tesla Discloses US Revenues Collapsed 39%. Americans Sour on its Cars, Pent-Up Demand Exhausted