As we’ve long said, if your business depends on a platform, you don’t have a business. For instance, Amazon sellers have been burned as the giant e-tailer by unwarranted suspensions, manipulating placements to favor Amazon listings, and even mining their data to develop competing Amazon private label offerings. But ambitious Airbnb landlords are now in a special world of hurt. And unlike vendors victimized by Amazon’s relentless predatory practices, it’s hard to work up much sympathy for Airbnb hosts who profited at the expense of their communities and are now facing ruin.

The Wall Street Journal has a detailed story on how the top tier of Airbnb proprietors are crashing and burning. Leveraged speculation will do that. Quite a few bought or leased multiple properties, enticed by the big premiums they could earn over taking in long-term tenants.

One has to wonder why so many saw Airbnb as a risk-free trade. Vacation and corporate travel slowed dramatically during the financial crisis and took a while to come back. The recovery was even slower in what many think of a perma-destinations like Barcelona.1 And even more so than Uber, which depends on drivers not understanding their economics (as in the true cost of using their car), so too did hosts who procured housing for the purpose of listing it on Airbnb seem to be naive that they were signing up for the risks in the deal: high fixed costs with revenues that could evaporate. And did.

The Journal collected the usual mix of illustrative anecdotes and data. It’s not hard to conclude that most multi-property Airbnb landlords are upside down. For instance: 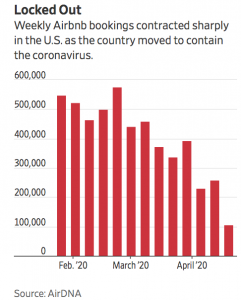 AirDNA estimates that a third of Airbnb’s U.S. listings for entire homes or apartments—excluding shared rooms—are by hosts with a single property. Another third are run by hosts with between two and 24 properties. The remaining third involve hosts with more than 25 properties.

Some of those hosts renting 25-plus properties are managed by startups such as Sonder Corp. and Lyric Hospitality Inc., which pay to rent hundreds of apartments they sublease on Airbnb and elsewhere. Many of those companies have furloughed or laid off staff in recent weeks….

Smaller players have spent hundreds of thousands of dollars each buying homes for short-term rentals. Jennifer Kelleher-Hazlett of Clawson, Mich., spent about $380,000 to buy two Michigan properties in 2018. She said she and her husband cashed out their financial investments and borrowed $100,000 from employers to furnish them.

The 47-year-old expected to net up to $7,000 a month from Airbnb after mortgage payments, supplementing her income as a part-time pharmacist and her husband’s as a schoolteacher. Before the virus struck, the couple was considering buying more homes. Now, they can’t make mortgage payments because no one is booking, she said. “We’re either borrowing more or defaulting.”….

In 2016, they [Jennifer and David Landrum of Atlanta] started a company named Local, renting the 18 apartments they leased and 21 apartments they managed to corporate travelers and film-industry workers. They spent more than $14,000 per apartment to outfit them with rugs, throw pillows, art and chandeliers. They grossed about $1.5 million annually, mostly through Airbnb, Ms. Landrum said.

They spend about $50,000 annually with cleaning services, about $25,000 on an inspector and $30,000 a year on maintenance staff and landscapers, Ms. Landrum said, not to mention spending on furnishings.

When Airbnb began refunding guests March 14, the Landrums had nearly $40,000 in cancellations, she said. The couple has been able to pay only a portion of April rent on the 18 apartments they lease and can’t fulfill their obligations to pay three months’ rent unless bookings resume. They have reduced pay to cleaning staff and others. Adding to the stress, Georgia banned short-term rentals through April…

Florida, Pennsylvania, Vermont and Delaware also have clamped down on short-term rentals, instituting temporary bans on Airbnb properties and similar listings. Local governments including California’s Sonoma County and Myrtle Beach, S.C., have enacted similar restrictions. The measures have made it harder for some Airbnb hosts to fill properties with families looking to quarantine outside their homes or near relatives.

The refunds came about because Airbnb hosts invoked its “extenuating circumstance” clause and provide full refunds for March 14 to May 31 bookings. Hosts normally set their policies for cancellations, with the most stringent providing for a 50% penalty. Most landlords were more generous. Airbnb has since said it will provide 25% of normal cancelled booking fees, which is not much solace for cash-strapped landlords who’d accepted deposits on the assumption they could treat some of it as money good. Note there are some irate comments on Twitter that indicate that not all Airbnb renters have gotten their refunds. Some Airbnb owners complained in the comments on the Journal story that Airbnb had not made good on its promise to pick up part of the cancelled booking refunds. For instance, from Roy Neff:

The “refunds“ they promised, which amount to $.12 on the dollar in the best case, have not been refunded to most hosts.

The Journal does cheerily reassure readers that the distress among these mini-moguls won’t hurt property markets, but it will hurt the cleaners and other support personnel:

Though most real-estate economists say there are too few Airbnb properties to ignite a housing crisis, the breakdown of the Airbnb economy could strain lenders, undermine property values and validate some local governments’ long-held suspicions that Airbnb contributed to the affordable-housing crisis.

But there’s clearly a lot of desperation among these landlords, and it’s not hard to imagine that Airbnb properties are concentrated in some areas. And if you read the story, it’s hard not to get annoyed with Airbnb flack Nick Pappas:

“No one anticipated that a global pandemic would require the country to shelter in place, upend the economy,” said Airbnb spokesman Nick Papas. “This is temporary: Travel will bounce back and Airbnb hosts—the vast majority of whom have just one listing—will continue to welcome guests and generate income.”

It takes a lot of gall or a lot of ignorance to peddle a line like that.

One chink of light for some Airbnb landlords: FHFA, which oversees Fannie and Freddie, said investors with mortgages from the agencies could seek forbearance. I have to confess to having missed that the GSEs, which were created to promote homeownership, are now in the business of owning other people’s homes.

Needless to say, Journal readers were not forgiving. For instance:

So… these people were investing with money they didn’t have? Sort of like playing the stock market with cash advance from your credit card?

I feel little sympathy for these people. They’ve leveraged the typical lag between technological innovation & law. Just because it’s technically legal does mean it’s in accordance with the intent of the law.

The intent, with regard to running a hospitality business, is for operators to be obligated to maintain certain standards & to pay to have a registered licensed, business in order for local government to manage the services that administer public commerce regulations for the benefit of the general public.

With regard to the local community, the intent is to have particular areas zoned for particular types of business & activities. This gives private citizens the assurance that if they move into a dwelling because they want to be in a residential neighborhood with the consistency & stability that implies, they won’t wake up some day & find they’re in the midst of an environment filled with transients who have no personal stake in the well-being or livability of the community.

Good! They take inventory out of market and make housing more unaffordable. Plus who wants to live next to a AirBnB party house.

Great story…. reminds me of… WeWork.

Classic case of arbitrage gone wrong… People who thought they were smart and making great money suddenly can’t even come up with money to pay a few months rent or mortgage?

I can’t pity them nor do I believe they should be supported by the government where money can be better spent on those that truly needs the support.

Want to have some fun?
Every time any article mentions a PR type?
In Big Startup Land?
Especially in the Great State of Silicon Valley?
Google the name.
And you’ll probably find a connection to Big Politics.
Especially the last administration.
Nick Papas?
From PR Magazine about the new PR guy for AirBnB:
“Papas came from the Obama administration, where he served as assistant press secretary and communications director for the White House Office of Health Reform. He also held communications roles for former Rep. Rahm Emanuel (D-IL), the California gubernatorial campaign of Phil Angelides, and Sen. Tom Daschle (D-SD).”
And after you Google the name, go back to the article and look at the PR guy’s quotes.
Anything sound familiar?
The difference between the function of being the voice of any politician, and especially their voice of “White House Office of Health Reform” and any “entrepreneurial startup” championed by the great State of Silicon Valley?
Zero.

Some may ride in and try defending Airbnb because you liked it and because it was cheap. Don’t go there. “Because cheap” is just a rationalization for depriving state and local governments of tax revenues, workers of bargaining rights, and in the case of buying stuff from China, exporting the pollution resulting from your consumption. For defenders of neoliberalism, the New York Times is over there.

1 I did what turned out to be an austerity tour in Europe in 2009. The Barcelona airport was close to a ghost town.